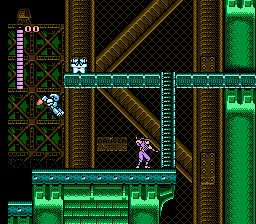 At one point in time, Natsume was quite the prolific developer. It might be hard to see, considering they’ve spent the last two decades mostly releasing iterations on the Harvest Moon and Rune Factory series, but in the heyday of the NES, they would develop several titles every years across many different genres, including the niche strategy and RPG genres with games like Palamedes and Dungeon Magic. At the time they were mostly known for their action games however, though never to the same levels as heavy hitters such as Konami and Capcom.  Perhaps this was because many of their games, albeit typically well polished and solidly designed, aped so liberally off of other, better games; Abadox: The Deadly Inner War, with its auto-scrolling shooting inside of a living planet nakedly steals its premise from Life Force, while the cult classic action platformer Power Blade mixes Mega Man’s level selection and ranged combat with the extending power meter that was popular among many action games at the time. And then there’s Shadow of the Ninja, which to this day is doomed to live in the shadow (ha!) of Ninja Gaiden.

That’s not quite a fair assessment really, though it may be hard to see the difference between the two games just looking at still screenshots, or even playing the game for the first few minutes. While it lacks Gaiden’s cinematic storytelling outside of an opening and ending cutscene, it shares much of the same aesthetic – a fast paced action platformer starring a Ninja in a setting largely inspired by the American action movies of the late eighties. Main character’s Hayate and Kaede both have similar sprites to Gaiden’s Ryu Hayabusa, with Hayate even sharing his purple color scheme, and both start out with swords with similar timing and range to Hayabusa’s standard attack. 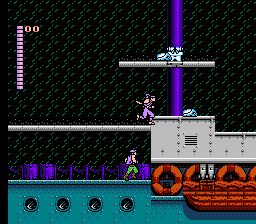 Looks can be deceiving though – according to the game’s opening story which only plays after idling on the title screen, it takes place in the then-near future of 2029, where the evil Lord Garuda (what exactly he’s lord of is never explained) has taken over America’s ‘largest city’. The game opens on a tanker and faces you off against mostly human opponents much like Ninja Gaiden. It’s not until the later stages where the setting is replaced with futuristic machinery whirring in the background while cyborgs and robots take over as your main assailants that the near future setting becomes readily apparent.

Similarly, Shadow of the Ninja is known for sharing Gaiden’s brutal difficulty, and the game lives up to that reputation. But the devil lies in the details, as both games approach their challenge in very different ways. Ryu Hayabusa runs a fair click faster than Shadow’s ninja pair, and has slightly more mobility since he can cling to and bound off of walls. Ryu also dispatches enemies quicker, as the vast majority of them fall to a single attack from his sword.  Contrariwise, Shadow’s protagonists are far more durable than Ryu, but so are their adversaries, taking far more hits to take down than any foe in the Ninja Gaiden. What’s more, many of the enemies either attack with ranged weapons or with erratic movement patterns, and will flip around and continue their assault if you try and jump over them. This forces the player to tackle each screen as a separate encounter rather than a series of assailants, and the conservation of health makes each level feel more like a battle of attrition rather than a reflex based obstacle. In other words, Shadow of the Ninja is the Castlevania to Ninja Gaiden’s Super Mario Bros., having a more methodical and considered pace than its fellow counterpart. 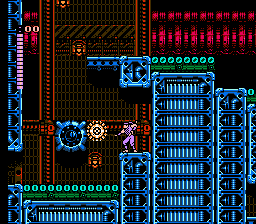 While Shadow’s ninja duo lack Hayabusa’s aforementioned ability to cling to walls, they are instead able to hang from the underside of certain platforms and flip between standing and hanging on them at the press of a button. This adds a unique layer of verticality to the game  and adds variety to the level design rarely seen in other NES platformers. Many times climbable platforms can be used to switch between attacking an enemy and avoiding its own attacks, while vertical climbing sections often have stationary turrets where timing when to climb and when to hang is crucial to making progress unscathed. There are also multiple sections that use moving, climbable platforms to craft devious obstacle courses; One particularly challenging spot lies near the end of the game where platforms move at varying speeds up and down rows of tight vertical shafts with only small openings forward that can either lead to dead ends or into enemy projectiles and requires constant moving back and forth to be able to find the path leading forward.

This different take on level design and enemy placement makes understanding Shadow’s equally unique weapon system crucial to success. Both protagonist start out with a Ninja Gaiden esque katana swipe, whose range is not very impressive to say the least. Enemies, smashable objects and invisible secret areas will sometimes yield several types of weapon drops such as a throwing star whose distance extends the length of the screen but has limited ammo capacity that must be used up in order to switch back to the sword, and the kusarigama, a chain with a blade attached that attacks further than the sword and in multiple directions, but can’t hit enemies at close range. To compensate, the sword has the unique ability to be powered up; grabbing an extra sword power while holding the sword creates a short shockwave to emit from the blade, while a second power up extends the maximum reach to a little further than the kusarigama. Further, the powered up sword also powers up the shuriken projectile, first giving it more damage and then the ability to home in on enemies around the screen. None of these powers extend to the kusarigama, however the sword power can be degraded by taking several hits of damage. The sword power is by far the most useful ability in the game, but holding onto it requires significant skill. 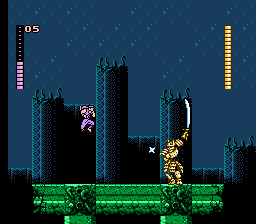 There are other drops in the game, though they are much more rare. The ninja scroll allows for the character’s sword to be fully powered up in one pick up, though these are mostly found in invisible sections of the wall that can only be found via luck or watching a video playthrough of the game. There is also another ranged weapon pick up; the bomb, a small, circular black orb that rolls across the ground slowly before striking a target, causing an explosion that does multiple hits of damage in a row to enemies. They are powerful and can absolutely devastate bosses provided the player can carry them that far without using the meager supply they’re given. Finally, the player has one more special ability: ninjitsu magic which can be called at any time by holding both the attack and jump button, causing lightning to strike every enemy on the screen. This can give some much needed breathing room, especially in vertical sections where enemies and projectiles tend to block the path upward, but it comes at a great cost, namely half of the character’s current health. In a game where the conservation of health over time is imperative, the risk can far exceed the reward, making the ability much more useful to take out end level bosses quickly rather than not having the necessary health needed to complete a level.

Alone, Shadow of the Ninja is an extremely hard game, but that difficulty can be mitigated by having a friend to play with. Shadow has a simultaneous two player mode a la Contra, which makes the game much more manageable – the tougher enemies go down much faster, and having someone take point to clear out pesky ranged attackers is a lifesaver. A second player doesn’t suddenly make the game a cakewalk however; for example, platforming hazards like moving platforms require much more patience and communication when a second player is thrown into the mix. But the biggest trade off is the game’s death mechanic, which works slightly differently between the single and multiplayer mode; dying solo brings the player to a continue screen and five chances to retry the current stage before the game goes back to the title screen, a far cry from the unlimited continues of Ninja Gaiden. Conversely, should a player die in multiplayer, they will respawn somewhere near the currently living player. While not having to replay the stage can be a saving grace, there is still a five continue limitation in effect. Worse still, those five chances are shared between both players, and this info isn’t communicated anywhere in the game’s HUD. Regardless if you play alone or with a friend, you can pick whether to play has Hayate or Kaede, though both play exactly the same. 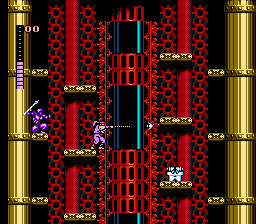 Whether you play alone or with a friend, Shadow of the Ninja is a unique, challenging game that only resembles its ancestor Ninja Gaiden at a cursory glance. That passing resemblance did eventually make the game an official part of the Ninja Gaiden lineage with Ninja Gaiden Shadow. Originally planned as a GameBoy sequel to Shadow of the Ninja and developed by Natsume rather than Tecmo, Ryu now has the ability to cling and pull himself up on certain platforms like the Shadow duo, faces off against tougher, robotic opponents and is a generally slower, more methodical game like it’s NES cousin and one that is far more palatable than a straight Gaiden game probably would have been on the tiny GameBoy LCD screen. Regardless, Shadow of the Ninja is an original experience that only suffers from a similar aesthetic to the more popular Ninja Gaiden that’s worth checking out. Thankfully the game made a reappearance on both the Wii and the Wii U virtual console if one doesn’t want to rely on the aftermarket to give the game a shot.