Taito’s 1988 side-scrolling beat-em-up/platformer Kuri Kinton is, for all intents and purposes, a rehash of Irem’s seminal Kung Fu Master AKA Spartan X, that had come out four years before. Even the plot is largely the same: martial arts expert goes to save people taken prisoner in a five-story hideout full of identical mooks, with a tough opponent on every level. The only difference is that there’s not the usual “kidnapped girlfriend” stuff, but this time the captives are a Chinese policeman and his daughter, and the hero Kuri Kinton has to save them to prevent political turmoil, or something to that effect. 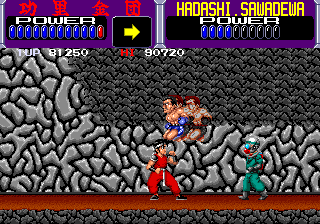 Where Kung Fu Master‘s Thomas only relied on his kicks and punches, our hero’s abilities are more mystical in nature, including the ability to shoot energy balls from his palms, and concentrate to form an aura around him. This manifestation of aura (or ki, or chakra, whatever you want to call it) acts as both a single-use shield and a slight boost of his attack power. It can be performed up to three times, just by standing perfectly still a few seconds. This is not an easy task, since enemy mooks always flood the screen in both directions. The switch to a less realistic (as long as Irem’s game can be considered that) example of fighting makes sense if you consider that the game’s sources of inspiration are not only Bruce Lee and Jackie Chan movies, but also then-recent fantasy fighting anime such as Dragon Ball and Hokuto no Ken/Fist of the North Star.

Every level has dozens of disposable guys in gas masks, one mid-boss that follows you through the level until you defeat him, a few sparse traps like conveyor belts or lava, and one boss at the end, always fought in a room with two dragon statues in the background. Where the mid-level bosses (with wacky names like “Winny Windy” or “Moai the Junior”) are strong but plausible characters such as kickboxers, karateka and burly giants, end bosses attack with tricks such as energy waves, doppelgangers, hundred-palm strikes, somersaults and so on. This part is reminiscent of one-vs-one beat-em-ups and, as such, is much more difficult than the rest, as long as you don’t exploit the flaws in the enemy AI. When you defeat the fifth and last opponent, you are treated to a lame non-ending typical of this kind of games. 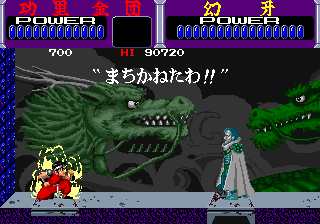 Kuri Kinton is obviously better than Kung Fu Master in the technical and artistic department, with bigger, cartoony and expressive sprites, and some comical touches like the golden angel emerging from the Kuri’s body when he is defeated. The hero looks like Dragon Ball‘s Son Goku and Yamcha put together, and other characters look like they were taken from that series and Hokuto no Ken as well. The campy “martial arts flick” style has been retained, with a nice Oriental-inspired background music and many onomatopoeia such as KPOW, BASH and NUN (?).

On the other side, one fourth of the screen is taken by the energy bars, with other useless stats like enemy names and arrows that show you the direction, not that the level layouts are so maze-like to justify that. The background graphics are very monotonous – almost always stone or tiled walls, only ever changing color palettes. The only different part is the very beginning featuring a barren wasteland, not exactly interesting stuff. The various bosses graphics are also lazy, being sprite swaps of the same muscular caped guy over and over again. 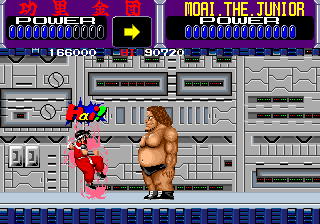 For the rest, though, this game does not improve on the Kung Fu Master formula in any meaningful way and feels dull as a result. While Irem’s game was groundbreaking in 1984, repeating the same thing four years later makes for a short, shallow and repetitive experience, and this is probably the reason why Kuri Kinton wasn’t successful in arcades and did not leave any legacy. It was never ported to any system until 2006, when it became part of the Taito Legends 2 compilation for PlayStation 2 and Xbox, and also Taito Legends Power-Up for PSP.

Little bit of trivia: a “kurikinton”, also written as two words, is a Japanese delicacy, a sweet dish made of candied chestnuts and pureed sweet potatoes. The title appears to be a pun.