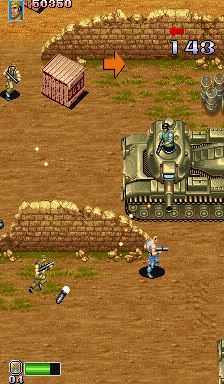 Many of the games released in the wake of Commando borrowed themes from American action movies – Ikari Warriors was basically an unofficial Rambo: First Blood Part II, and even Sega’s Master System clone was an official tie-in with Stallone’s movies in North America. So for Commando‘s sequel, Capcom decided to go the same route and give it a punch-up, moving the setting from a vague jungle war to a modern military conflict, filled with beefy dudes blowing up helicopters and tanks. In Japan the game is called Senjou no Okami II, making it clear that it’s a sequel, though the overseas version goes by the name Mercs. This was perhaps done to avoid confusion with the 1986 Arnold Schwarzenegger movie named Commando, which the original arcade game inadvertently shared the same name with, despite having no official connection. 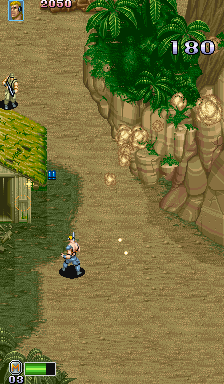 In this game, the (presumably American) ex-president has been kidnapped by revolutionaries, so the mercenary squad Wolf Force is sent in to save him. In the English language version, this country is the fictional African nation of Zutula (since it’s indicated as having an apartheid government, this is undoubtedly a stand-in for South Africa), while the Japanese version takes place in the more vague “R-Country”. The first level begins on a beach with a jungle, before moving to European-style cities, advancing through shipyards, through the mountains, then to the final enemy base. There are six full levels, plus a final boss encounter that’s counted as a seventh one.

Five years had come and gone between Commando and Mercs, which saw not only significant technical enhancements but also improved design. The game runs on CPS-1 hardware, and allows up to three players to play at once. One of these is Joseph Gibson – believed to be Super Joe from the first game but not confirmed until Bionic Commando (2009) – as well as Howard Powell and Thomas Clarke, each looking basically identical during gameplay outside of palette changes. The stages are more advanced – while you’re still compelled to move upwards, the screen scrolls left and right, allowing for wider levels. The stages are also more thoughtfully designed, with setpieces of enemies along with the constant influx of foes that will keep you on your toes. There aren’t as many things to hide behind, so you need to keep moving, but there are more things to blow up. There are also actual boss fights this time around, with the first being a dramatic encounter with a harrier jet with a mountain in the background.

The main machine gun works pretty much the same way as in Commando – rapid fire but short range. There are three additional weapons to pick up too – the flamethrower, the bazooka, and the multi-directional shot. These have unlimited ammo and can be held until you grab something else. The typical Capcom “Pow” icon makes an appearance here, which rather than killing everything on the screen, will instead increase your weapon’s strength. Instead, the grenades have been upgraded to “mega crush” explosives, which will explode and damage everything on the screen, complete with an animation that looks a lot like your hero doing an air guitar strum. These are obviously limited in number, though they’re replenished after continuing. Some stages also have vehicles you can enter, including jeeps, waterskis and even tanks. They each have their own health meter so you need to deal as much damage to enemy forces as possible until it blows up. 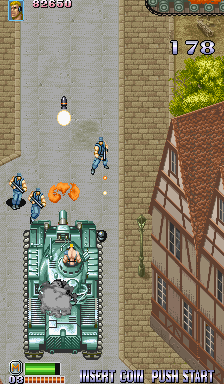 Even aside from vehicles, your heroes have a life meter, but only one life. The amount of damage taken depends on what you’re hit by – getting pelted by a bullet will only take off a small sliver, which your hero will apparently just shrug off, but explosive shells can knock off a third of your health or more, and some powerful attacks can kill you outright. Health items are plentiful, however, and there are even items that will permanently extend your life bar. These enhancements are tiny, though over the course of the game, it can make a pretty big difference.

The life system works well because it ensures that Mercs has a constant forward momentum, instead of stopping and restarting every single time you take a hit. The downside to it is that it becomes unbalanced at points, particularly near the end of the game, and especially in the final encounter. In these spots, a single hit will take away your one and only life, requiring that you stick in a whole other credit, or completely ruining your one-credit clear. Considering how the early stages are pretty fair when it comes to difficulty, it leads to some frustrating encounters. This is doubly true, again, when you fight the final boss, where you need to destroy an airplane before it takes off. Run out of time, and you lose, requiring that you continue again and restart the whole fight.

That’s really the only mark against Mercs, which is otherwise one of the best of its kind. It takes pretty much everything good that was set down by Commando, and modernizes it by expanding pretty much every aspect. Blazing forward and burning down enemy dudes with the flamethrower, rocking explosive mega crushes whenever appropriate, to the tune of a shredding CPS-1 soundtrack, makes for a true Capcom classic. The only reason why it isn’t the absolute best is that later titles advanced the formula even further, adding things like strafing, multiple playable characters, and multiple routes (see Shock Troopers for being the absolute pinnacle). 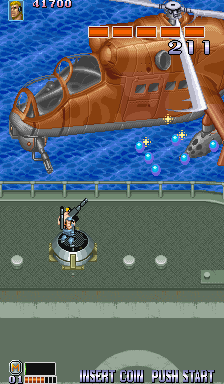 Mercs wasn’t quite ported as many times as Commando but it still got around. The best of these is the Genesis port, handled by Sega themselves. It sticks the gameplay in a window about 3/4ths the size of the screen, with the score and weapon window on the right, in order to maintain a similar display ratio of the vertically oriented arcade game. It’s not entirely appropriate here though, considering the levels scrolled left and right anyway, so there’s no reason they could’ve have just shown the whole stage. As a result, it feels cramped to other similar (though otherwise lesser) games like Rambo III. The visuals aren’t quite as bright, but it still looks pretty decent, and the music has been translated pretty faithfully. Some enemy placement has been changed slightly, but nothing too major. Auto-fire can be enabled, and you’re given five continues to beat the game.

The biggest downfall is that multiplayer is gone entirely. Nope, not even a two-player mode. To make up for this, there’s an added “Original” mode with a brand new set of levels. Here, there are five commandos to control, each with wielding different weapons. you start with just one and then rescue them throughout the stages, then you can switch between them at any time by hitting the pause button. Taking a page from Capcom’s Forgotten Worlds, you can pick up medals and use them to buy various power-ups from tents strewn about the stages. Each commando acts as their own life, basically, and there are no continues. The graphics are the same as the arcade mode, though there’s a brand new soundtrack here. So basically, you’re getting two games in one. If it weren’t for the missing multiplayer, this would probably be even better than the arcade original. 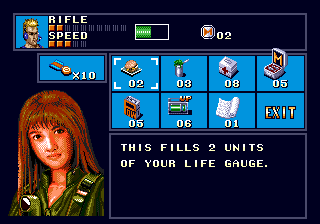 While the home computer ports of the original Commando were generally pretty decent, the same can’t be said for Mercs. Most of this is due to the conversions being handled by Tiertex (who also did Strider), known for their low quality jobs. To be fair, they aren’t complete disasters like someof their other works – the Amiga and Atari ST versions look pretty decent, though there’s a noticeable lack of polish, ranging from animation and game speed, to just how the game looks and feels. There’s also only one song played throughout all of the levels. The Amiga version is pillarboxed and has a similar aspect ratio to the arcade game, while the Atari ST version has a smaller screen and sticks the status bar on the side, while having weaker sound.

The Commodore 64 version is something of a mess, with controls and game speed that feel completely off. It’s missing some stuff too, like many of the tanks. There’s only one song played throughout the whole game, and it’s just some random song, not even a conversion of the original tune. The Amstrad CPC version looks okay but is choppy and barely playable; the ZX Spectrum plays just as poorly but is a visual disaster. All of the computer versions are scaled back to two-player at max.

Tiertex also handled the Master System port, which is quite subpar. This is one of the other versions displayed in full screen, but everything about the animation and speed just feel off. Worst of it, there’s no in-game music during the levels, though a poor rendition of the first level theme is played in the ending. It’s kind of sad when an early SMS title like Rambo First Blood Part II, itself a Commando/Ikari Warriors clone, has better production values.

Near arcade perfect ports can be found for the PlayStation and Saturn (as part of the Capcom Generations Vol. 4 pack), which also includes an enemy gallery and two arranged tracks. And like Commando, this version was used for the base for the ports to the PlayStation 2 and Xbox (on Capcom Classics Collection) and PSP (on Capcom Classics Reloaded). The ability to rotate your TV vertically to get the correct aspect ratio is present in the Capcom Generation Vol. 4 collection, but removed from the console Capcom Classics Collection. In the PSP version, you can rotate your system in order to play it properly. In horizontal display, the screen is pillarboxed. On the Wii Virtual console, the game can be found as Wolf of the Battlefield: Mercs. 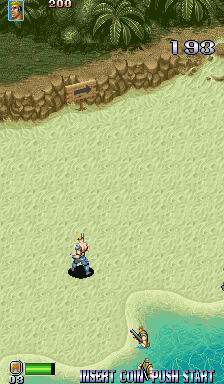 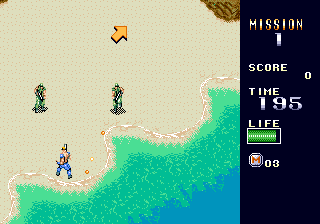 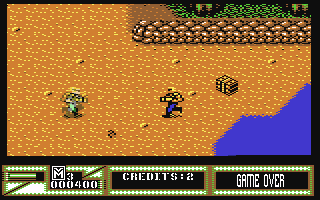 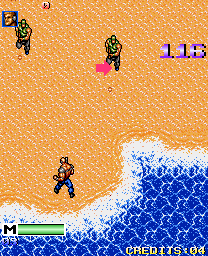 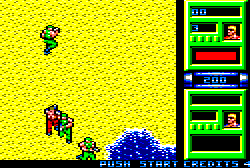 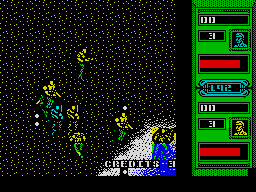 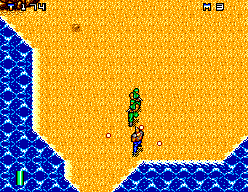