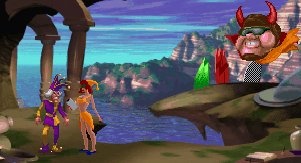 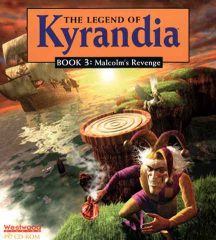 At the end of the first game, Malcolm the jester was imprisoned in stone, putting an end to his reign of terror for good. Or so Kyrandia thought, until an errant lightning bolt hits the statue, freeing the jester from his prison and leaving him to roam free once again. But your task isn’t to stop him – no, in a unique twist, you’re put into the shoes of Malcolm himself. As it turns out, he was framed for the murder of the King and Queen, but no one believes him, so he must put together the pieces of a royal conspiracy that set him up to take a fall. This is all a bit weird if you’ve played the first game – he was clearly a hideous bastard who had no problems killing Brandon in cold blood, and his reformation from a psychotic lunatic into a mere mischievous jerk is clearly a retcon. But while it’s only halfway believable, it does provide a unique setup, and the developers expand on the offbeat sense of humor from the last installment, making for an even more interesting game.

The first chapter of Malcolm’s Revenge might be one of the most brilliant segments in adventure gaming history. The residents of Kyrandia – Brandon and Zanthia included – are none too pleased that Malcolm has awakened, and have ordered him into exile. They apparently don’t have the resources to actually kick him out, though, so it’s up to Malcolm to find his way out the kingdom. There are half a dozen different ways to accomplish this, each with wildly varying solutions. You can try digging up ingredients to create a Pegasus Potion, morph into a flying horse and simply jet off the island, similar to a quest from the first Kyrandia game. Or you can learn to juggle or become a mime, and hitch a ride on the ship of the local circus troupe. You can take the easy route and simply create a magic portal, or follow a bizarre ritual by clicking two eels together. (No, that is not a misspelling.) Perhaps the most amusing simply involves becoming an escaped convict. If you’re captured at any point, you’re sentenced to some menial community service (making doilies, etc.) before being freed. You can carry out your sentence if you want, but you can also get creative and figure out ways to escape. After each continual break-out, you’ll be given new tasks, and eventually joined by your incompetent prison guard (and potential love interest, of all things). Keep weaseling out of these situations, and eventually you’ll find yourself in the next chapter.

Whatever route you choose, it’s a brilliant example of freeform design, the kind that gives you several alternatives, ranging from easy to obtuse, and lets you choose which one to take. While it has no bearing on the rest of the game, it also adds quite a bit of replay value, because there are whole segments of the game that you’ll miss unless you explore every possible path.

Unfortunately, once you leave Kyrandia, it’s almost all downhill from there.

The second act takes place on the Isle of Cats, where the mystical feline population has been overrun by a group of oppressive dogs. All of the locations are connected with a tediously confusing jungle, which is extremely easy to get lost in until you memorize all of the directions. It also brings back some of the dreaded gem puzzles from the first game. They’re all buried underground, and the only way to retrieve them is to get one of the dogs to dig them up by giving them a bone. But their locations are randomized, requiring that you continually save and reload until they dig up all of the proper jewels.

The next area, The End of the World, is a series of waterfalls. There’s a very specific route down these cliffs, all requiring bizarre items like umbrellas and inner tubes, but it’s almost all determined by trial and error, forcing you to restart (or at least, reload) until you’ve found the correct path. At the end of the line is Limbo, which is an undersea kingdom ruled by a horrific fish queen. The items you need to escape this area are, again, randomly generated, requiring that you leave and return multiple times before they’ll appear. Worse, Malcolm is enslaved by the Queen, and will routinely call for his presence to play stupid games of Tic-tac-toe, dragging you away from your quest.

After escaping, Malcolm thinks he’s found peace in the Underworld, which more closely resembles a vacation spa than the usual fire and brimstone image that Hell usually conjures up. It seems to be the only place he can find happiness, before being thrust back to Kyrandia to find some closure. The island is much the same as the first chapter, except it’s nighttime, and you can take all of the steps to gather evidence and clear Malcolm’s name once and for all. Again like the first chapter, there are multiple ways to tackle the situation. As the intro relates, Malcolm used to have two guardian angels – the good Stuart and the evil Gunther. Stuart was knocked out a long time ago, leaving Gunther as Malcolm’s sole voice of guidance. Due to Malcolm’s spiritual journey, Stuart awakens for the final chapter. Malcolm can choose who to follow, or accept both of the voices, leading to three different paths to the end game. 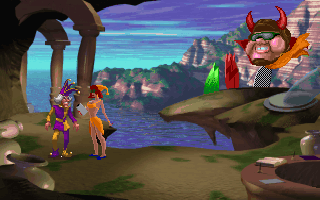 The final chapter practically redeems the whole middle section of the game – the tedious puzzles are gone, and it’s much more in line with the beginning. It also brings some differing viewpoints on elements from the previous games in the series. The earlier games presented Kallak, Brandon’s grandfather, as a kind-hearted wise man. Malcolm, on the other hand, has always viewed him as a weasel – his perusal through the royal picture book is one of the most amusing parts of the game – and the final segments cleverly flip some of the purported truths established since the beginning.

While the quality of the puzzles is severely inconsistent, the writing and sense of humor further establish Kyrandia as an extremely weird place. In the first chapter, Malcolm is constantly harassed by a weird backwards-talking kid, and the most popular snack in the land seems to be fish cream sandwiches. The game includes a studio audience, which laughs blindly at anything being said. And while there still aren’t any dialogue trees, you can choose how Malcolm approaches the other characters through the use of the Mood-o-Meter. You can switch his demeanor to Nice, Normal (i.e. sarcastic) or Lying, depending on how manipulative you want to be.

This is also the only Kyrandia game that keeps a running score, which increases when solving puzzles or finding Easter eggs. The real purpose of this is that every accomplished task has some kind of humorous moniker. Combining two disparate items to create a completely new one will yield MacGyver Points, while picking a lock with a rusty nail will give Common Thug points.

The designers also know that it’s sadistically fun to see your character get killed, so they not-so-subtly warn you every time you’re in a dangerous situation – and even if you do get killed, you can choose to resurrect right before Malcolm’s death. After all, there aren’t too many games out there with deadly squirrels or killer mimes. Most of these scenes are pretty silly, except for one so absurdly gory that that game asks if you’re old enough to view them. (Malcolm’s Revenge was released before the days of ESRB ratings, but this single scene features such extraordinary amounts of cartoonish blood that it alone would’ve earned it a Mature rating, despite the disclaimer.)

There’s a different feel to the graphics this time around. While all of the sprites look similar to the other two games, the backgrounds here are computer rendered, and unlike most CG from the time, they’ve aged pretty well. Some may miss the classic pixel look of the first two games, but the artistry exudes colorful imagination. The rendered cutscenes don’t fare quite as well, especially due to their heavy compression. The inventory bar is hidden most of the time, allowing for the visuals to take up most of the screen, and only pops up when necessary. The music is also all digitally streamed, allowing for a much higher quality soundtrack. The Kyrandia games have always had excellent music, but this game’s soundtrack is undoubtedly the best, as it allows composer Frank Klepacki and his sound team to move away from the militant marches of Command and Conquer and create something more lighthearted. Although the voice actor has changed for Malcolm (and is far superior to his original incarnation), former vocal cast members have returned for the likes of Brandon and Zanthia.

Malcolm’s Revenge is pretty hit or miss overall – it’s bookended by some fantastic segments, but the whole mid-game is borderline dreadful. But its sense of humor, bright visuals and excellent music help keep up the spirits even through the lousiest segments, enough that it’s worth seeing through to the end.