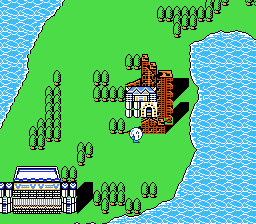 So, the Famicom game American Dream, published by a company called Coconuts, stars an anthropomorphic pachinko ball that’s sick of his life in Japan, and heads to the United States of America (specifically, New York City) in order to become rich and famous through excessive gambling.

As Pachio-kun, a semi-famous (at the time) cartoon character, you begin the game in Brooklyn, wide-eyed and ready for tons of riches. This is quickly dashed when the first casino you find won’t let you in without a ticket (not sure there’s any casino that will actively turn away customers, at least as long as they’re old enough.) Once you find one lying on the ground, you can begin the game proper, as you go around to different casinos, and play slots. Over and over and over again. Some casinos offer better payouts than others, and even a few are rigged against you. As you gain enough money (lots and lots of money), you gain access to the other boroughs of NYC, with the final stage culminating in New Jersey for some reason. Never mind the fact the developers clearly didn’t seem to care that gambling as portrayed here is illegal in most of the country, outside of Nevada and a few other select areas. (Realistically, this was probably done because New York is way more recognizable than a pit like Atlantic City.) Still, things are pretty far from accurate because Manhattan is filled with trees with only the occasional skyscraper. 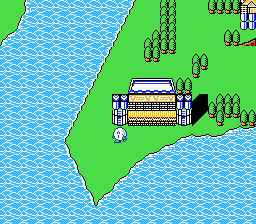 Along the way, there are also random encounters on the field map where you can bet on dice games and other similar games of chance. You can find extra items, too – for instance, the gun lets you defend yourself against the muggers that show up in Manhattan (!!) but if you carry it around, you can also be arrested and need to pay for bail.

It’s all window dressing for the slots and such, but at least it’s slightly innovative window dressing. Many of the “games” you find in real life casinos, especially slots, are pretty useless when divorced from the atmosphere and the tensions that casinos bring, but that doesn’t stop people from wanting to play them, for whatever reason. (The same can be said of pachinko video games, which continue to terrify Japan to this very day.) But at least putting it in some kind of context gives the whole ordeal some structure and goals, even if it amounts to stupid, repetitive grinding. A lot of this makes sense considering that American Dream is a spinoff of the Pachio-kun series, of which there are no less than five on the Famicom, and at least a few others on the PC Engine, Super Famicom and PC-FX where you control the same character as you walk around town and play pachinko all day. 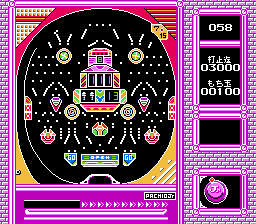 So while it all seems cute and weird and funny, on a cultural level, there’s something deeply unsettling about the whole ordeal. The title, for instance. The old adage of the “American Dream” – life, liberty, and the pursuit of happiness – is that if you work hard, eventually you’ll find yourself climbing the socioeconomic ladder, eventually ending up with vast riches.

As millions of immigrants discovered throughout the centuries, this isn’t entirely true, and even non-immigrants have issues with it, as has been illustrated in great works of literature like Arthur Miller’s Death of a Salesman or John Steinbeck’s The Grapes of Wrath. And now, here, we have this crappy little Famicom game, coming out and saying, hey, the American Dream is really just a sham, and only suckers actually work for a living, so why not just gamble your way to the top? If you take the slots and dice games as a greater metaphor, you could easily take it to mean that most Americans simply became rich through investments, which is basically gambling, anyway.  And let’s not forget that the main character’s obsession with gaining money can be construed as parody of the very nature of capitalism.

Even though it’s obviously unintentional, American Dream is a pretty fascinating bit of social commentary, especially coming from 80s Japan. From a regular, sane angle, it’s a slightly clever casino game disguised as a vaguely comedic RPG, but ultimately kinda worthless and repetitive.

As a side note, the game is actually developed by a company called C★Dream. The internet at large has taken this to mean the American development team Color Dreams, purveyor of unlicensed trash like Captain Comic and Menace Beach. In reality, they are completely different companies. There’s also an English translation patch available.