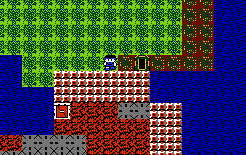 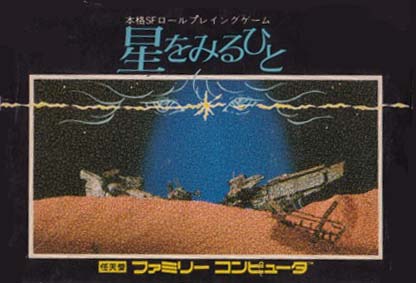 We’d all like to believe that video games are made by brilliant computer programmers and artists, who work under completely ideal conditions and with sensible deadlines. This isn’t always the case, of course. Sometimes, when villainous corporations are out to make themselves some money, they’ll do things as cheaply and stupidly as possible. Sometimes the development team will be poorly managed. Sometimes the development team will be comprised of total imbeciles. These are all surefire ways to create a Bad Game. 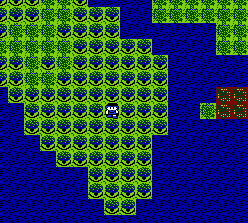 In some cases, though, the quality control is so disastrously nonexistent that some titles can transcend being merely a Bad Game. Hoshi wo Miru Hito (which translates roughly as “Stargazer”) is an RPG that’s hilariously embarrassing on just about every level. It was published by Hot-B, one of those cryptically prolific Japanese publishers from the 80s that somehow managed to stay in business despite rarely putting out anything of real worth – to parallel a Western company, they’re similar to Ocean, who subsisted on tons of licensed garbage for the Commodore 64 and Amiga despite their games being almost universally trashy. Hoshi wo Miru Hito is so awful that it’s been given the title of “legendary shit game” (“densetsu no kusoge” is the official term) by Japanese fans, effectively regarding it as one of the worst video games ever made.

To be fair, the premise behind the game is pretty sound – rather than getting stuck in the medieval conventions that permeated a majority of Western RPGs (remember, this was released in 1987, and JRPGs had just been invented with Dragon Quest a year before), Hoshi wo Miru Hito takes place in the future, where everyone wields Extra Sensory Power (ESP) instead of using magic. It’s meant to be inspired by an old Japanese PC cyberpunk RPG called Psychic City. There are a total of four characters – Minami, Shiba, Misa and Ainu, all gifted with psychic powers. You see little pictures of them in fights, and they grow up as they gain more levels. There’s some kind of story about a place called Ark City where you need to adventure off to, and a computer called Crew-III, which is probably screwing up something somewhere. Sci-fi settings for any JRPG are rare, even nowadays, which is a little remarkable. So it’s basically like Phantasy Star, except if Phantasy Star had been designed by a completely inept team. 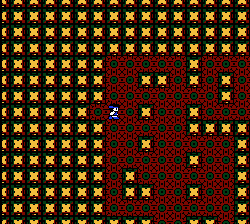 Hoshi wo Miru Hito is about as ruthless of a Dragon Quest ripoff as you could imagine, except exponentially worse. The interface is pretty much the same, except slower and clunkier, if that were possible. It takes your character a whole second just to slog across two tiles of terrain, which is truly astounding. And the graphics are even worse, with possibly the most appalling use of color seen in a Famicom game. The only good thing about the sound and music is that it’s probably better than, say, Bible Adventures and its random sequence thumps and boops.

Really, though, there have plenty of awful games with trashy graphics and pitiful sound and stupid controls, and they haven’t been labeled as a “Legendary Shit Game”. It’s the moronic design decisions and completely insane programming that earn it that rank. 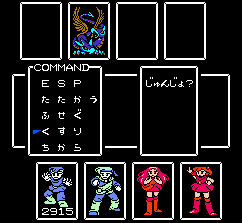 For example, you start the game on the overworld, with no real purpose and any idea of what you’re supposed to be doing. Granted, this is an old game, back before the time of cutscenes, and the story is detailed in the manual. But even Dragon Quest gave you an audience with the king before you started.

Anyway, the first town is invisible. That’s right, it appears as a nondescript tile on the overworld, but if you step on it, you’ll be transported right to it. If you start walking around town and talking to people, one of them gives some kind of BS excuse as to why the town is invisible, something about the people pooling together all of their powers so people can’t see it. Uh, sure. When you leave towns, you’re transported to a predefined area, sometimes places that aren’t even remotely close to the town. Leaving the second town (which actually is visible on the map) will teleport you right back to where you started at the beginning of the game. 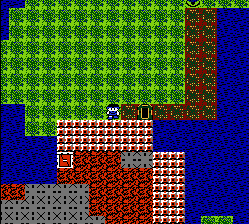 In fact, almost nothing is visible on the world map – stuff just kind of happens, and you don’t know why. Near the beginning, on the eastern side of the continent, you’ll stumble magically upon a cave (at least, I think it’s a cave.) If you leave, you’ll also get sent back to the beginning of the game. The trick is to hug the coastline and hope you don’t accidentally step on one of the hidden tiles that will transport you. Treasure items are hidden – it’s always pleasant to be stumbling around and then be rewarded with some gold. Unfortunately, important, plot specific items are also hidden, meaning you’ll need to fumble around aimlessly until you get a message that you’ve found something.

Not far into the game, you get the “jump” ability, which lets you walk over certain landscapes. What kind of landscapes seem to be arbitrarily defined – sometimes you can walk across ten tiles of ocean and other times it won’t let you walk over too. You only know you’re “jumping” because you hear a silly little sound effect and then your character glides over the terrain. There are whole mazes that are completely incomprehensible because it’s never clear when tiles are passable and what aren’t. 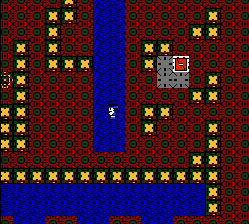 Things just get worse when you get into battle. The first option highlighted in the combat menu is “ESP”, which, at the beginning, you don’t have at all. Why not make the default action “Fight” like every single other RPG out there? And once you do get ESP…well, there’s absolutely no way to cancel out of the menu. If you select it by accident? Too bad, you’re stuck using some ESP power, and if you’re out of MP, you simply lose a turn.

You’ll also notice a little number next to your character, which represents your HP. You start out with 5, but if you take, say, 15 HP worth of damage, you’ll end up with 3. Now exactly does that work? Is it some kind of warped kind of subtraction that only makes sense to the inner workings of the Famicom? After mucking around in menus, it becomes clearer – the battle screen simply truncates the last digit. So if it says you have 5 HP, you really have anywhere from 50-59. Hilariously, if you dip below 10 HP, it’ll display zero, so one would expect you to be dead. 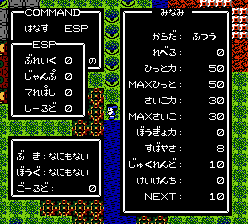 Most RPGs of this era required a lot of grinding, especially in the early segments of the game, just to get beyond the first town area. This is especially true here, but it takes the whole thing to insane levels. You start off at Level 0, can barely do than 1 HP worth of damage with each attack, and most foes are far, far, far more powerful than you. Furthermore, there’s no way to run from battles until you gain an ESP skill at a certain level. So in order to gain enough strength to survive outside the first area, the planets need align so you’ll encounter foes that won’t immediately tear you to shreds. To get to this point, you’ll probably need to reset and restart the game several times. Perhaps this is why there’s no intro to sit through each time.

There’s one enemy called a Salamander which can inflict your characters with a status ailment with a 100% success rate. There’s no way to cure it in battle, so if all your characters get hit with it, all you can do is sit and wait until your party is helplessly torn to shreds. At least Final Fantasy gave you the courtesy of an automatic Game Over screen if all of your characters were turned to stone. 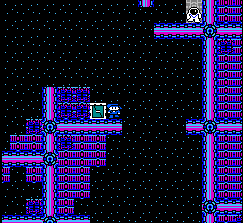 There’s no battery backup, so you need to track your progress with passwords. They’re shorter than, say, Dragon Quest II, but they don’t even save all of your progress. Right at the beginning, if you build up to Level 1, then start up again using your password, you’ll be knocked back down to Level 0. After all of the hard work to get to this point, this is a complete travesty. The Japanese fan sites seem to be annoyed that the passwords use a combination of katakana and the English alphabet, as opposed to the hiragana that the rest of the game uses, though I’m not sure why that’s such an issue.

There are more problems later in the game. In order to get into certain doors, you need a keycard. These keycards disappear when you use them, and cost an extraordinary amount of money. And it’s completely possible to get trapped in area if you don’t bring enough keycards with you. There’s no item management at all. Once you buy a new weapon, the old one is immediately discarded, without gaining any money back. Sometimes, more expensive items end up being weaker, so it’s possible to get tricked into buying new stuff that’s actually worse. You begin the game unarmed, but if you buy the first weapon – the Ray Gun – you actually do less damage. 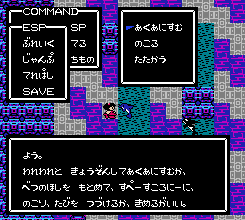 Hoshi wo Miru Hito is the definition of a video game tragedy. In some ways, its scenario is pretty ambitious for such an old game, but it appears that the game designers were not actually familiar with video games, the programmers were clearly confounded by the architecture of the Famicom, the artists were clearly off their rockers, and the play-testers were simply non-existent. And yet, it has a small yet devoted fanbase. A hacker actually took the trouble to patch the game, redrawing and enhancing all of the graphics (using plenty of redrawn sprites from Final Fantasy and Dragon Quest), rebalancing the weapons, and increasing the walking speed. Another group actually created their own freeware homebrew remake for Windows, dubbed STARGAZER. The graphics have been redone to resemble the Genesis Phantasy Star titles, and all of the stupider bugs have been removed. It’s still pretty hard and kind of slow, but at least it’s playable. 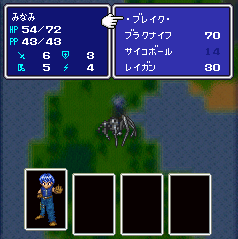 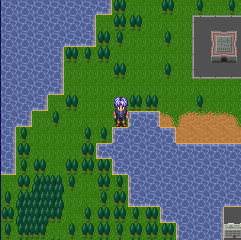 Thanks to Sinople for suggesting this game, and translating some of the articles. 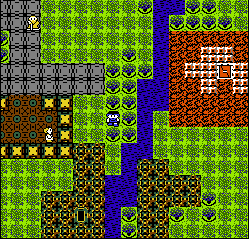 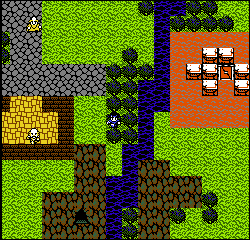 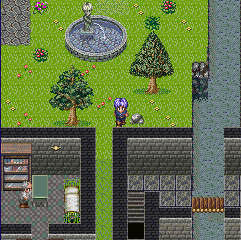