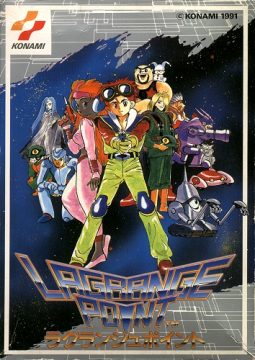 It’s the 22nd century, and mankind has successfully colonized outer space. These three structures built at the Lagrange points between the Earth and the sun – Land-1, Land-2, and a satellite base – fall under mysterious attack by a mutant menace. Earth has sent two teams to investigate, but they have not returned. As a young soldier named Jin (with a last name of your choosing), you are a member of a third mission to explore the crumbling remnants of survivors, assemble a crew to help you, and dispose of the corporate faction that has attempted to take over the colonies for their own gains. 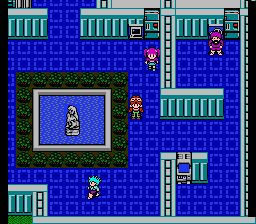 Lagrange Point is one of the most technically advanced RPGs on the Famicom. Published in 1991, at a point where the system was losing ground to the 16-bit systems, its graphics are a huge step above the likes of Final Fantasy or Dragon Quest, it has a relatively involved sci-fi conspiracy plot that contrasts with the typical medieval fantasy setting, and it’s simply far more densely packed than most other similar titles on the system. Most impressively, it’s the only title to take advantage of Konami’s VRC7 memory management chip, which included an onboard FM synthesis chip and produces a soundtrack completely unlike anything on the system. 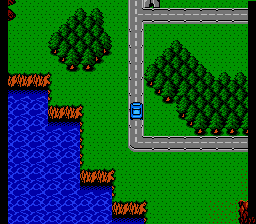 The battles are much like Dragon Quest, with four party members facing up to six enemies in a first person perspective, with actions displayed in text on the bottom. While most enemy sprites are static (with the exception of certain boss attacks) and the background is all black, most battles are accompanied with scrolling lights on the side of the screen, which change in both color and speed, and shift directions to match the flow of combat. It gives the sensation of hurtling on a roller coaster through a dark tunnel, and manages to make the battles feel more engaging than usual. The enemy designs, particularly the weirdly mutated bosses, are also pretty cool. 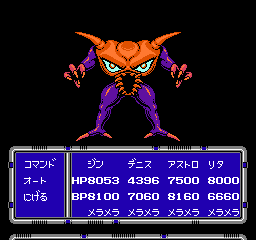 The fundamentals of combat are not dissimilar from the standard Attack-Special-Item-Escape paradigm found in most RPGs of those years, and the frequent fights can become less of a burden thanks to a handy auto-combat feature. Nevertheless, there are various other features that are quite unique to Lagrange Point. Amongst the ten playable characters, five are human, three are cyborgs and two are robots. These characters are met in different occasions as the game progresses, and if you agree to make them join the roster, they will await in a lounge room in the satellite base where they can be summoned whenever desired. 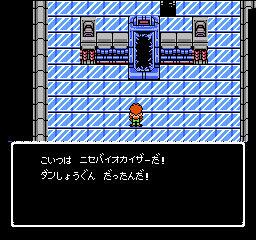 Perhaps similarly to other RPGs of the time, the game provides obscure background allusions to some of these characters (Erina and Richard from Final Fantasy II come to mind). There is a point in the game when playing character Chris is referred to as “Lambada Chris” (likely due to the fact that lambada was quite popular in Japan at the time of game development) by some NPC called “Jiruba no Sarii”, literally “Jitterbug Sally”, with jitterbug being some kind of crazy swing dance; later in the game, Chris is again recognized to be the queen of lambada by some “Bossanova Takeru”, who even asks her out. Background information of this kind is rather sparse, but makes the game feel a little deeper. Each character type has different types of abilities and status afflictions – for example, robots can rust and need to be healed through alternate means, and also cannot equip weapons or armor. Humans have unique special attacks called a “kimewaza” (“decisive move”) that will drain HP upon use. Humans and cyborgs are also affected to a certain extent by their emotional status, which can increase their strength if they’re elated, increase susceptibility to status ailments if they’re depressed, or simply cause them to panic; the explicit effects differ with each character. Meanwhile, robots have no emotions, so they are tragically free of such highs and lows. Special powers apart from the kimewazas are enabled by obtaining kits and act like typical magic spells, although certain characters can only use certain skills. Interestingly, enabling auto-combat allows the CPU to trigger kimewazas, heal characters, and utilize items and kits in a surprisingly effective manner, up to the point that it would make perfect sense (while being less fun) to attempt for a boss fight by relying on this feature only. 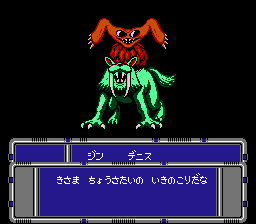 Monsters are quite varied, with a bit of easy re-coloring here and there, without being excessive though. Non-playing characters are also quite numerous, but as usual only few of them are actually essential for the story to progress. Some of these NPCs (up to a maximum of two in a row) will enter the party as “side characters”, and will help in a number of occasions. Interestingly, the only animated cutscene in the game is associated to one of them, and has contributed in making the game quite known among Japanese gamers due to its tragic momentum. A NPC later in the game is also particularly helpful in providing location and map information upon entering any world zone. 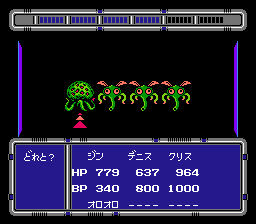 Lagrange Point‘s equivalent to MP are Battery Points (BP). However, rather irritatingly, BP is not reserved solely for special attacks, since even regular attacks will drain it. As such, you’re generally required to keep a stack of battery packs in your (fairly limited) inventory to replenish them, or otherwise keep close to the (thankfully numerous) computer rooms which can save your game and restore your stats. The max BP is not raised through level gain, but rather by obtaining and using battery tanks found in shops throughout. Like Dragon Quest, the penalty for dying is fairly light – you are resurrected at the last computer terminal you accessed with all items and experience intact, but you lose all of the cash you obtained since the last visit. The whole party falls if Jin dies, so naturally it’s in your best interest to protect him. Also, the terminal screen changes color during combat to reflect the current health status of the characters, which can be useful to monitor the fight more closely in the middle of auto-combat. 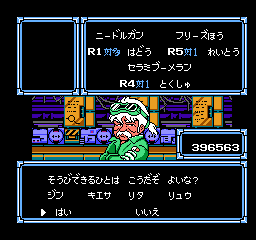 One of the most entertaining aspects of the game is with no doubt the weapon customization system. Weapons come in many different types, such as knives, shotguns, rifles, swords, boomerangs and bazookas, and are organized into six damage levels (R1-R6, weakest to strongest). Each rank comprises a set of weapons hitting a single enemy per turn and a set of weapons hitting everything that’s on screen, making for a grand total of 72 different weapons to choose from. Finally, each weapon is attributed an energy class among “denki” (electricity), “netsu” (heat), “hadou” (wave), “reitou” (freeze), “fushoku” (corrosion), and “tokushu” (special). 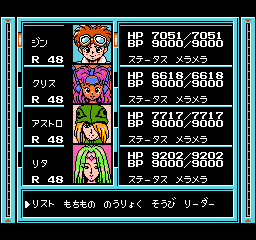 While some of these weapons can be obtained from the treasure boxes and armor shops found throughout the game world, the biggest part of them is obtainable through “buki gattai” (weapon fusion), a weapon creation process that, similarly to “akuma gattai” (demon fusion) found in the first Megami Tensei game from four years earlier, consists of merging two weapons together to create a new one. This can be done exclusively at the factory found in the satellite base, which for a very moderate price allows to produce rather powerful weapons in addition to providing a range of basic ones to start the fusion from. The process is facilitated in that the factory guy previews the final weapon and the characters that currently can equip it (having enough Power and Brain) right before the operation (and, of course, payment) is finalized. This whole process is rather quick and makes for a short and enjoyable diversion, since basically you won’t need to go hunting even for basic weapons to achieve maximum attack power, which is in fact easily obtainable by randomly fusing across damage levels. Nevertheless, this makes weapon creation considerably less rewarding than demon fusion in Megami Tensei, where basic demons had to be sought for and fruitful combinations were convoluted to say the least. For a comparison, here is the complete fusion table for Lagrange Point, while here you can find one for the first Megami Tensei game (notice how very specific monsters rather than classes are needed for advancing demon levels). At one point in the game, one Doctor Kumi reveals the best armor-weapon combination for each character in the party, although it is pretty useless at this point for the very reason weapon fusion is so painless. Finally, it is worth mentioning that each and every energy-weapon combination comes with its own shot animation and sound, bringing a soft wind of fresh air to the frequent fights. 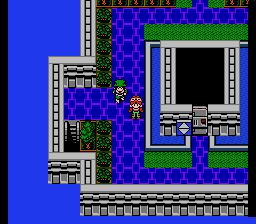 Since the colonies are cylindrical, the overworld loops from north to south, and travel is handled initially through a vehicle. At the beginning you can only use a car, which is restricted to (the often broken) roadways, but eventually you can use tanks (to travel off the roads), boats (to travel on water), a hoverplane (which can go practically anywhere) and eventually nothing (to walk in special areas such as a drained water canal). Towards the end of the game, a special device called “hydrowing” can be used to teleport the party across properly unlocked world areas, but its introduction is so late in the game that the usage you’ll make of it will be rather limited. Amongst the cities are numerous laboratories and underground chambers, which link various parts of the colony and function as most of the games’ dungeons. There are also more than a couple of areas where you’ll be floating in a space suit instead of simply walking. The whole structure can be rather complex and allows for some exploration, although plot progression is still generally linear. Thankfully, map files of the entire game world soon become available and prove to be essential travel companions. 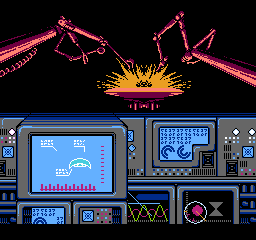 For all of its advancements, Lagrange Point is still saddled with all of the issues that plague 8-bit RPGs. The numerous random battles, though fairly quick, still grow tedious, and the game naturally expects you to grind quite a bit. It doesn’t quite have the chops of Sega’s Phantasy Star, which it was clearly inspired by. The graphics and sound are excellent, but not as excellent as the Master System game from four years earlier, and it obviously doesn’t compare to Phantasy Star II either, to which it bears even more similarities. Still, considering that a huge chunk of the Famicom RPG library were middling Dragon Quest ripoffs, Lagrange Point is one of the few that’s still worth revisiting. 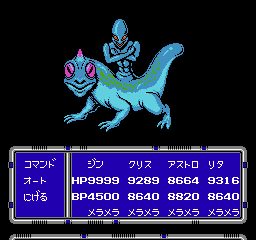 Perhaps more interesting than its technological advancements is how Konami involved the gaming community in Lagrange Point‘s development. As part of the “Game Koubou” project, in conjunction with Famimaga magazine, they polled readers for input about various elements, including the title, the details of its plot, monster designs, and even NPC dialogue – similar to what Capcom did for the robot masters in the later Mega Man games, but on a much larger scale. In addition to the Konami Kukeiha Club, the soundtrack was also composed by Akio Dobashi and Noriyuki Takahashi, of the 80s Japanese rock band REBECCA.

Links:
Magweasel A write-in in English about the game’s background.
H-Empire Excellent full walkthrough and FAQ.
Lagrange Point Wiki Another full walkthrough in Japanese, not quite as good.