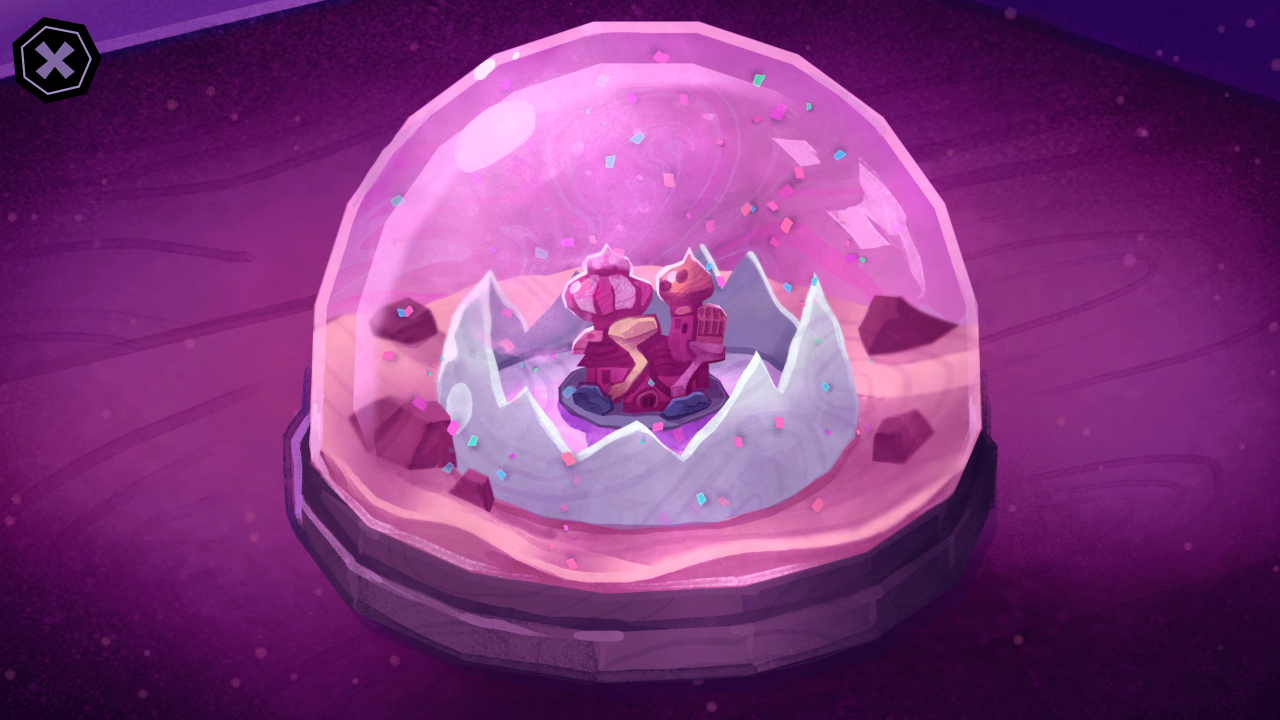 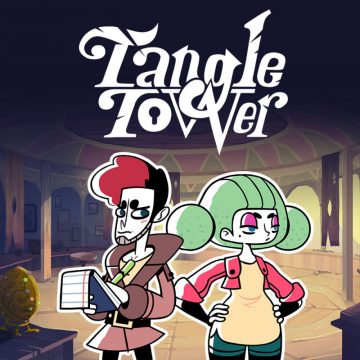 Five years after Vian brothers tried bringing Detective Grimoire into the commercial indie world, we finally have a sequel. They’ve mainly been busy on mobile releases, the cutesy Switch co-op puzzler Snipperclips, and the goofily grim house haunting game Haunt the House, nothing particularly memorable but all quite charming and colorful. They’ve found a niche for themselves and have been pretty comfortable there, and it seemed like Detective Grimoire didn’t really have a place in there anymore. Come 2019, and it turns out they were taking their time, rethinking elements of the previous games and aiming to make something that put the series up to this point to shame. 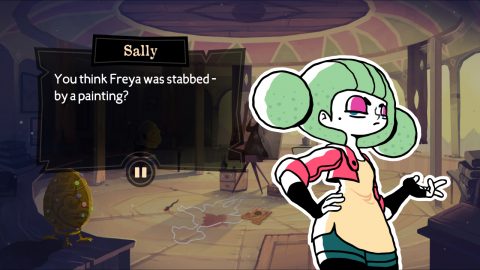 Tangle Tower is so successful at this that it would invalidate the previous games if not for the fact that it does end up being a direct continuation of the previous game, despite implying otherwise initially. The project started shortly after the 2014 release, an attempt to take advantage of the Creative Europe’s funding program for narrative games, got put on hold to make Snipperclips, and finished up after with a two year dev cycle. During all of that, the team rethought character dynamics, game structure, and puzzle design, resulting in one of the most polished detective games you’ll find out there.

You can tell something is different from just the first scene. Instead of an introductory exposition dump from Officer James and some mystery built by that mysterious girl who always seems to find Grimoire, you just see Grimoire arrive to the scene of the crime in silence. He’s now accompanied by Sally from the last game, a former suspect now working as Grimoire’s snarky assistant. The two have a completely different chemistry from any of Grimoire’s old relationships, Sally able to take Grimoire out of his comfort zone for comedy while being just as observant as he is. You figure out what you’re doing by looking at your case file, and then move over to the scene of the crime after exploring the grounds for awhile. 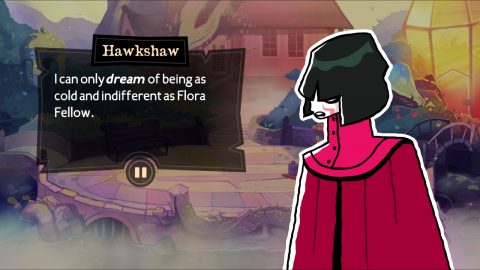 It’s a solid mystery hook. A young painter, Freya Fellow, has been murdered while painting the manor’s owner, Flora Fellow. She doesn’t talk, which doesn’t help, but there are further complications by a lack of a murder weapon and Freya seemingly killed right next to the canvas – from a stab to her chest. Add in the strange object she added to the painting actually being painted with someone’s blood kept in Freya’s paint pot, and you have a very bizarre series of questions to answer.

The titular Tangle Tower, which is not really a tower (a plot point), is a fantastic setting to solve a mystery. It’s an old, lived in place filled with bizarre things and secrets barely hidden on the surface to discover. It’s vaguely mystical, with water that causes soil to create gem fruits, ancient statues not unlike our old friend Boggy, and unique wild life, instantly taking you out of your usual comfort zone. Instead of the dark greens of the swamp, you now have a varied and light pallet complimented by rooms of each of the inhabitants unique spaces filled with personal details on each inhabitant. Every screen is beautiful and unique, the team’s background art still being on point, now further supported by additional touches. 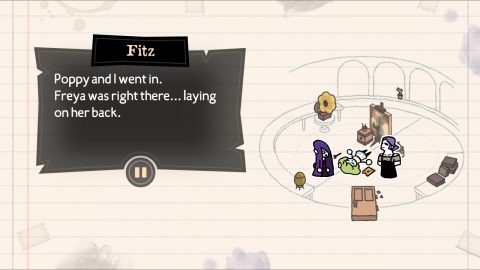 The menus and HUD are notably changed to a more traditional scant icons and pop up menus rather than the side bars of the last game. It lets the setting absorb you better, which adds a lot to the game’s homey feel. Characters during dialog also have much smoother animations, the art style of the last game modified from the team’s borderless, curvy characters to proper outlines and a wider selection of shapes and body types. This makes everyone more unique, their personalities being felt out just from their shape and silhouette alone, further complimented by the smaller details. Those animations are also quite a shock to the system coming off the previous game, fluid and detailed, and quite numerous, giving everyone a wide selection of poses. Tangle Tower simply looks better than the previous games in every single category, further complimented by the selection of music that ranges from great thinking pieces to lively character tunes.

The game is a vast improvement in terms of presentation, including some fantastic performances from the voice cast, but it’s also a huge improvement as a game proper. The gimmicky bits where you’d do a simple action in a bare bones minigame like an old school flash game are gone, instead replaced by a solid selection of puzzles, some of which manage to be fairly engaging brain teasers. The game is also kind enough to offer hints if you fail enough times, plus tells you when you don’t have all you need to solve it yet. 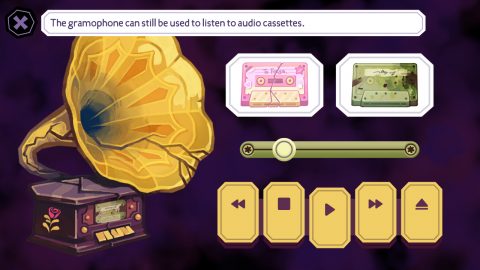 The core of the game comes down to interviews, asking about evidence or suspects, and eventually unlocking the secrets each of the tower residents have. The ending also doesn’t work as previously but has you go through a final few areas with major revelations and an eventual confrontation, which helps the story over all by allowing the story to build tension towards an intense climax. The change in structure works for this part, even if the rest of the game is very familiar to the last in in this department, just fleshed out a bit further.

A lot of this plot structure and pacing sounds familiar, but there are some important changes to making it flow. The doodling is removed and instead you’ll go right to moments where you have to organize Grimoire’s or Sally’s thoughts to get on the right track. Those secrets are also clearly on the interview screen and unlock for a logic challenge when you have enough information to challenge them, found from finding clues and talking with suspects. These are necessary to move the story along and reach the final area of the game. The game is very open with a solid six hour or so play time, using sort of “breakthrough” moments as gates to the next portion of the game, giving in a structure that makes you feel like you’re always making some progress. 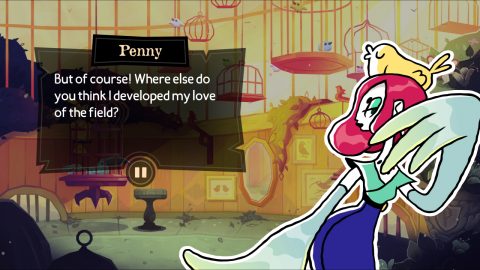 The story is also a major step up. The residents of Tangle Tower are various members of two families sharing the space (plus one stern detective), all of them having an involved history with each other and making the mystery all the more engaging as a result. Where the suspects in Boggy’s swamp were mostly a collection of strangers, the people here have a ton of history to them and to their families, complicating motives. The game is also confident in how it brings up elements from the past games, using subtle music cues and little hints in the environment as to where all of this is headed.

A lot also has to be said how memorable and varied the cast is. From the kind but awkward and intimidating Fitz to the bombastic but deeply insecure Felix, the residents of Tangle Tower are not only layered and fun to learn about, but just straight up engaging to talk with on whatever subject. Plenty of lines, plenty to read into, and a whole heap of great jokes and lines. Fifi and Detective Hawkshaw take the cake in this department, the former being hilariously blunt in all sorts of unexpected ways, and the later being the perfect straight-man for the main duo to bounce off of (when she’s not tearing down Grimoire’s ego). Where the cast of the last game were entertaining, they lacked the presence these eccentrics have in spades. 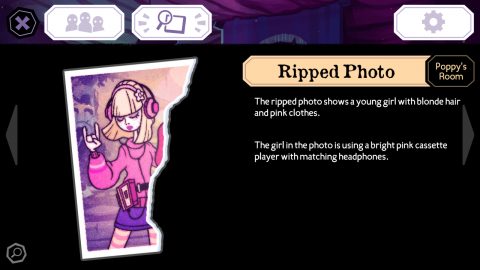 Tangle Tower is extremely impressive. The game may not have as much mechanical or design depth as some of its contemporaries, but more than makes up for it through presentation and and the attention to detail in its winding narrative. It’s a satisfying knot to undo, with a strong ending to boot, its biggest flaw that it leaves you wanting more. That’s a flaw most games would kill for. SFB Games is proving itself as a studio to watch more and more with each release, and hopefully we’ll get more of Detective Grimoire sooner rather than later.