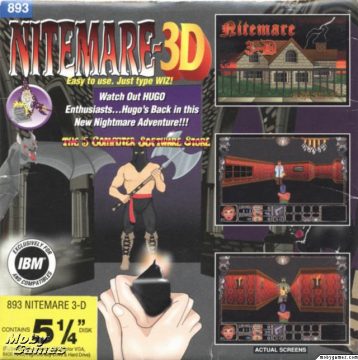 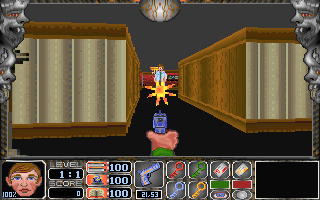 After three graphic adventure games, you’d expect the fourth game in the Hugo series to follow the same formula as the other three, possibly with some updated graphics and sound. What he actually did, however, may surprise you. David Gray probably noticed the popularity of Doom and Wolfenstein 3D, and ended up making his own version of it.

Penelope’s once again been kidnapped and placed somewhere in a haunted mansion by a mad scientist named Dr. Hammerstein. This time, however, Hugo has decided he’s had more than enough of puzzle solving, and he’s just going to shoot everything that gets in his way. After three games of obtuse puzzles and unhelpful old men, you can’t blame the guy for taking a more direct solution. Just like most first person shooters of the time, the story is split into three episodes with ten areas each. The game starts out in the mansion, through the caverns and dungeons beneath the mansion, and ends in a hellish alternate dimension. 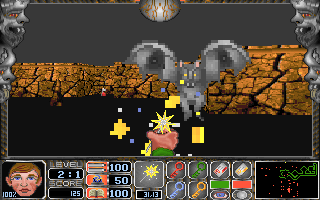 The goal on every level is to find the keycard that will open up the transporter that’ll bring you to the next area. As you’d expect, every level is full of monsters to shoot and ammo to collect, along with a good number of secret rooms. It’s pretty difficult not to compare this game not to Wolfenstein right away, and the easiest way to put it is that what the first three games were to Sierra adventure games, this is to Wolfenstein. 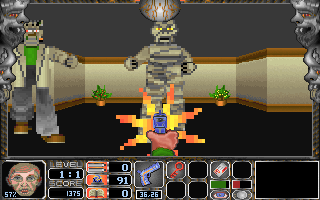 To be fair, though, the game does have its own original ideas, even if none of them work all that well. The most noteworthy thing is how it handles the weapons. There are four weapons in total, one of them a faster-firing version of the first gun, and one of the gimmicks is that certain weapons work better on certain enemies. Robots don’t take damage from the magic wand, for example, but it’s the only thing that will kill a ghost. It’s a nice idea, but the problem is that each weapon has its own ammo stock, so running out of one kind of ammo will mean you’re probably doomed if you happen to have a lot of immune enemies hanging around. The fact that only one of the weapons does damage on hitscan means running low isn’t unlikely, either, because you have to be aiming straight at the center of an enemy to do any damage. 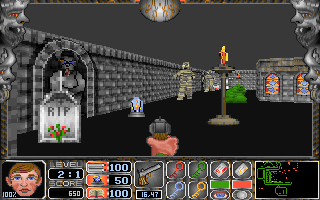 Another slight improvement over Wolfenstein 3D is the automap, complete with an enemy radar. The drawback is that while it’s activated, it drains power that you get from picking up magic eyes and crystal balls. While the magic eye is activated, a little icon of an eye on your HUD will light up any time you’re near a secret wall, which is handy. Unless you’re good at navigating, you will need this map, because the levels tend to be long, windy and maze-like. The fact that the map doesn’t show you any obstacles like plants doesn’t help, either. 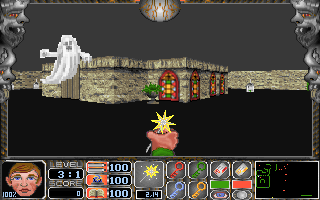 One of the problems with the game is that it’s just not really fair. Most enemies tend to do damage on hitscan, where it’s either incredibly difficult or impossible to avoid damage. Health pickups aren’t too common, and the most annoying part of it all is that the game will kick you right back to the main menu when you die. Not even a change in genre means that it’s safe to take your finger off of the quicksave button. 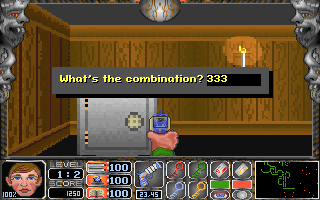 The graphics and sound are a huge step up from the adventure games, with full VGA graphics and digitized sound. The engine is about on par with Wolfenstein, with flat levels and solid black ceilings and walls. The textures can get pretty repetitive at points, but a few rooms have extra detail that helps make it a little more realistic, like a kitchen with cupboards and ovens on the walls. The sprites are decent, even if they’re pixelly and lacking in frames. 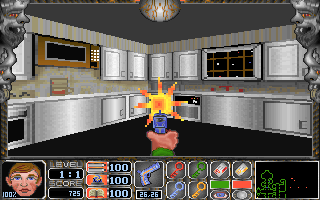 The entire game has a pretty thick 30’s horror vibe, from the cheesy organ music on the first level to the gargoyles that border the screen. The game was apparently meant to be something small kids could play, so most of the enemies are things like Frankenstein monsters, ghosts, and witches, and there’s no blood to be seen. Of course, if you have a child who wants to play an early ’90s FPS for some inexplicable reason, you might as well get them Ken’s Labyrinth instead, but it’s nice that David Gray was trying to do something for all ages.

This was the first Hugo game that was actually sold in the standard shareware format, with only the first episode available to play until you bought the full version. Buying the game also gave you a cheat menu that let you turn on things like god mode, infinite ammo, and infinite energy for your map, which is something you should leave on at all times. The game ends with Hugo and Penelope escaping the mansion. Penelope mentions that she has to leave Hugo because after seeing Hammerstein’s experiments, she has things she needs to do. Who knows if this was supposed to be a sequel hook, because after this game, David Gray switched over to making computerized jigsaw puzzles and apparently has no interest in continuing the series. It’s a really anti-climactic way to end everything, but considering the overall quality of all four games, not all that surprising.

While the Hugo titles are fairly well known by PC gamers of the era, they aren’t exactly sterling examples of the adventure game genre, ranking average at best. At worst, they’re incredibly dated even for the time period compared to games like Monkey Island. While they do a good job of replicating the basic gameplay of what Sierra was doing, they just don’t have the soul or challenge of any of their games. And while it’s a decent achievement for only one person doing everything, it just hasn’t aged well at all.