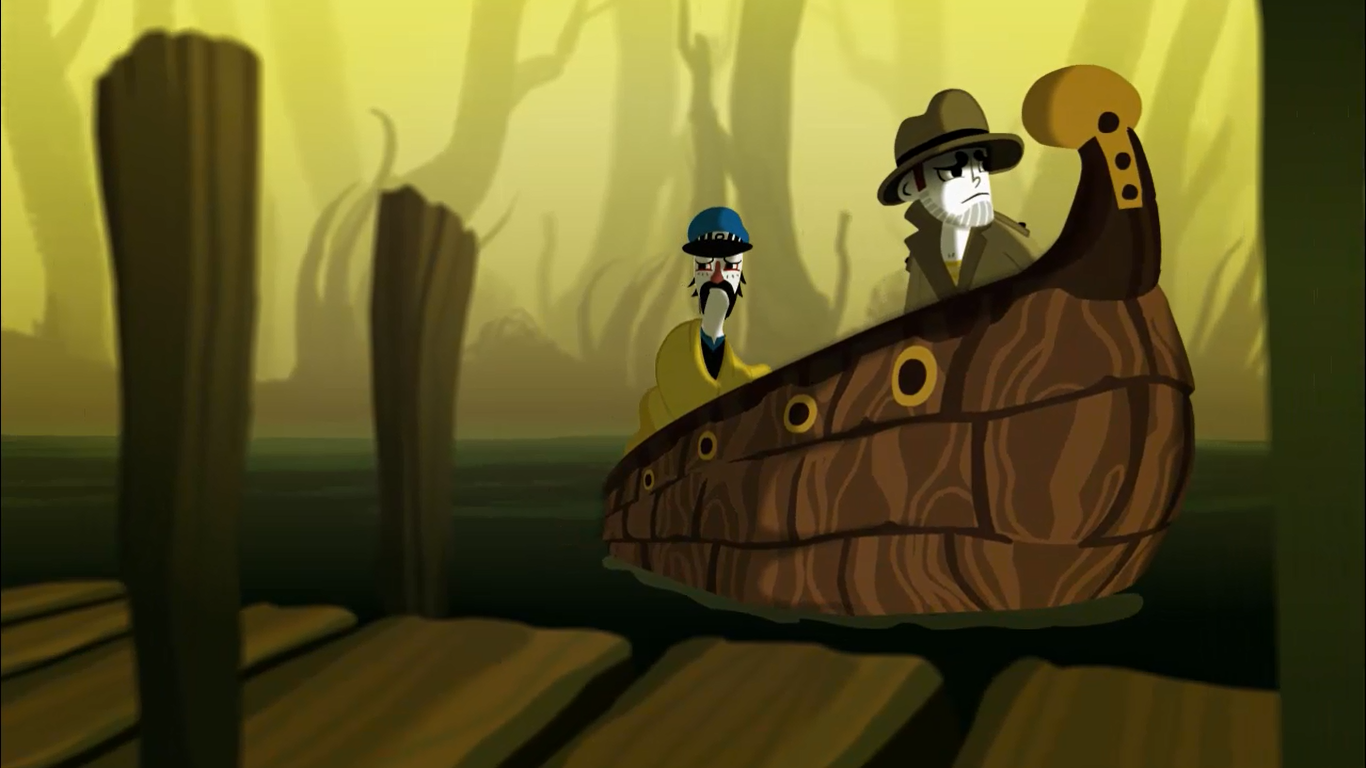 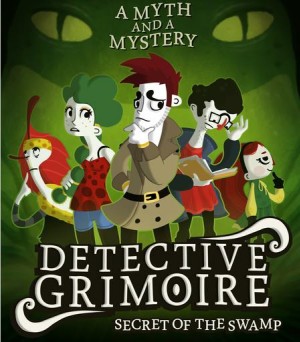 The new Detective Grimoire was a far cry from its confused predecessor. The art style was shifted to a very Secret of Kells look, with pale characters with striking color contrast. The world of the game traded out murky realism and decay for natural beauty of swamps. Most importantly, the game went for a comedic tone, with a hint of mysticism and tension under the surface. Detective Grimoire grew up and became something more inviting to wider audiences, but with a charm to it you’d expect to find in a high concept family film. It’s also ridiculously beautiful. 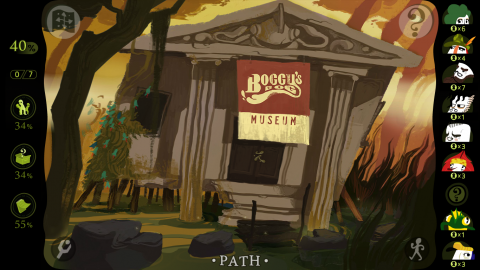 This time around, Detective Grimoire is enlisted by Officer James to find Boggy, a swamp creature at a tourist attraction who may be responsible for killing the owner. The situation is ridiculous to Grimoire, and the people he meets there end up being even more ridiculous as the idea of a man being killed by a swamp monster. Besides Grimoire and James, we also see the return of the mysterious little girl who pops up to assist Grimoire for her own unknown agenda, though the game gives her a new definition that suggests she’s something inhuman. 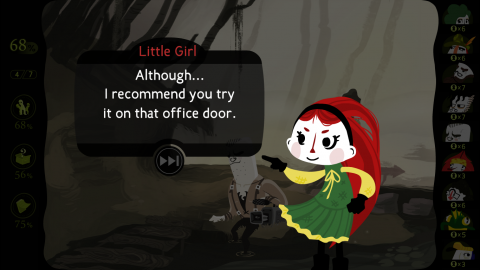 Right off the bat, the game captivates with that fantastic art style and the smooth, expressive animation. It’s hard to believe that the same people behind the first Detective Grimoire made this. Adam handled the animation and design, while Tom did the programming and design work. The two make a great team and created a very complete little project here, with some help from an additional writer, a talented background artist, and a new composer. The backgrounds in this game are simply gorgeous, and the music is cinematic quality, capturing the mood and creating a fantastic atmosphere. Everyone involved really bought there A-game, and amazingly, it only took five people to get all the nuts and bolts in order. 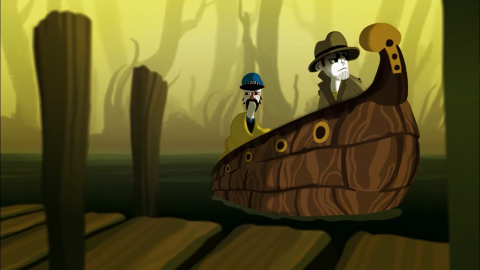 The story proper is very well structured, building up revelation after revelation, with some solid twists. One significant thing about it that it does differently than the Ace Attorney games is that it’s not nearly as open with what information is necessary to continue. The game expects you to piece together things yourself as you uncover information, giving you a very comprehensive list of info for every clue, suspect, and observation. At the same time, it never overloads you, and it’s rather easy to keep track of the most important information. Finding the killer at the end of the game works the same as before, except the game doesn’t ask you to name the suspect until you go through all the details on how the murder took place, then giving you the moment to reveal the killer upon realizing the most important part of the mystery. It respects the player’s own ability to piece things together, but does give nudges in the right direction. In particular, there are moments where you have to arrange Grimoire’s thoughts correctly to put him on the right path of questioning, which also helps the player know what to focus on. 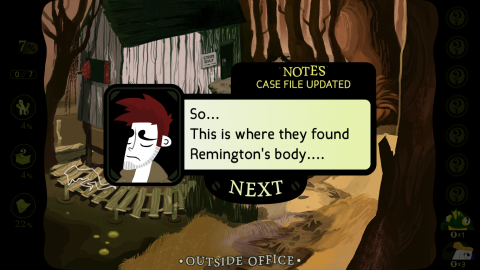 Replacing the stare down mechanic are challenges, which have you interrogating a suspect on a particular topic, rewarding you with information as you answer correctly or produce the proper evidence or scenario when asked. Along with dialogue choices, you can also form sketches in your notebook by selecting different icons and options and organizing them the proper way. It’s a neat little touch to add some personality to Grimoire, as he’s portrayed here as a cynical, inquisitive doop. He’s smart, but it takes him some time to put the pieces together. He gets a lot of great lines and comebacks here, partly thanks to the personalities he has to deal with. 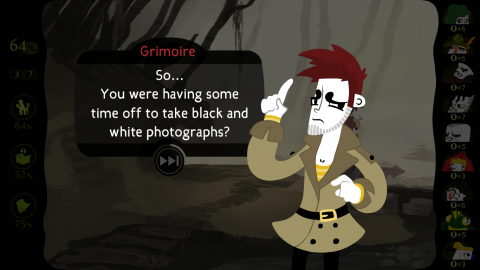 There are seven main suspects in the case, not including the elusive Boggy, and they all manage to instantly endear themselves. Characters include an egotistical director, an avid protester who confuses reality for childhood memories, and even a strange old lady living in a tree house, among others. The voice cast is all rising talent in the field who do great work, especially Edwyn Tiong as Grimoire himself, but the most notable name would be the voice actor for the chef Mr. Harper and museum dwelling nerd Agent Folder, Arin Hanson.

Arin is another personality who found his early popularity in the age of Newgrounds and Flash dominance, creating the Videogame Awesome series and eventually becoming a let’s player through the Game Grumpsseries on YouYube. He does great voice work, completely disappearing in his two characters, but there’s a cosmic hilarity to know one of the best voice actors in the cast is mainly known today for sending confusing texts to a good friend about “the Facebook movie” and “MARK ZUCKERBERG.” Arin still emphasizes that Flash age sensibility, a ridiculous personality creating ridiculous content just because they can. Most importantly, he also shows just how far those personalities have come since, the same as the Super Flash Bros themselves. It’s not hard to see why he was contacted to do voice work on this game. The ties of the Flash community are still surprisingly strong to this day. 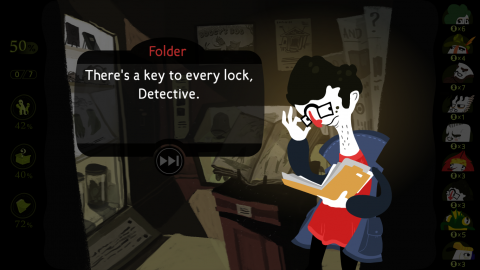 While the game has a ton of personality, artistic vision, and clever writing, the mechanics haven’t actually improved very much from that original Flash game. There are a few overly easy minigames mixed in to find clues or open doors, the hardest being a very easy gear puzzle. They only require the most basic logic to figure out, and they add nothing to the experience either, outside putting together one footprint. If these segments were removed, little would change. The game is also very short, clocking in at around a little over two hours. The seven dollar price is pretty fair for the polish here, but it would have been nice to see one or two more cases thrown in. Still, as SGB Games manages to gather profits from their most recent projects, we may see a grander scale project in the future. Detective Grimoire ends on a promise for more, and there’s a lot of directions they can take it now. 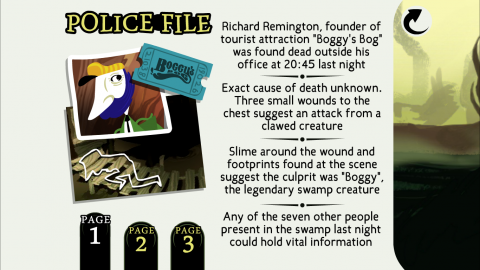 Perhaps the most interesting thing about Detective Grimoire‘s 2014 appearance is just how much it improves on the original Flash game’s foundation. If you ever feel like your work today is crappy and worthless, just look at these two games. In just seven years, the people who made a messy little Flash game made an artistic beaut that evoked a style that puts most other styles in games today to shame. You can get better, and who knows? You may just make something incredible.