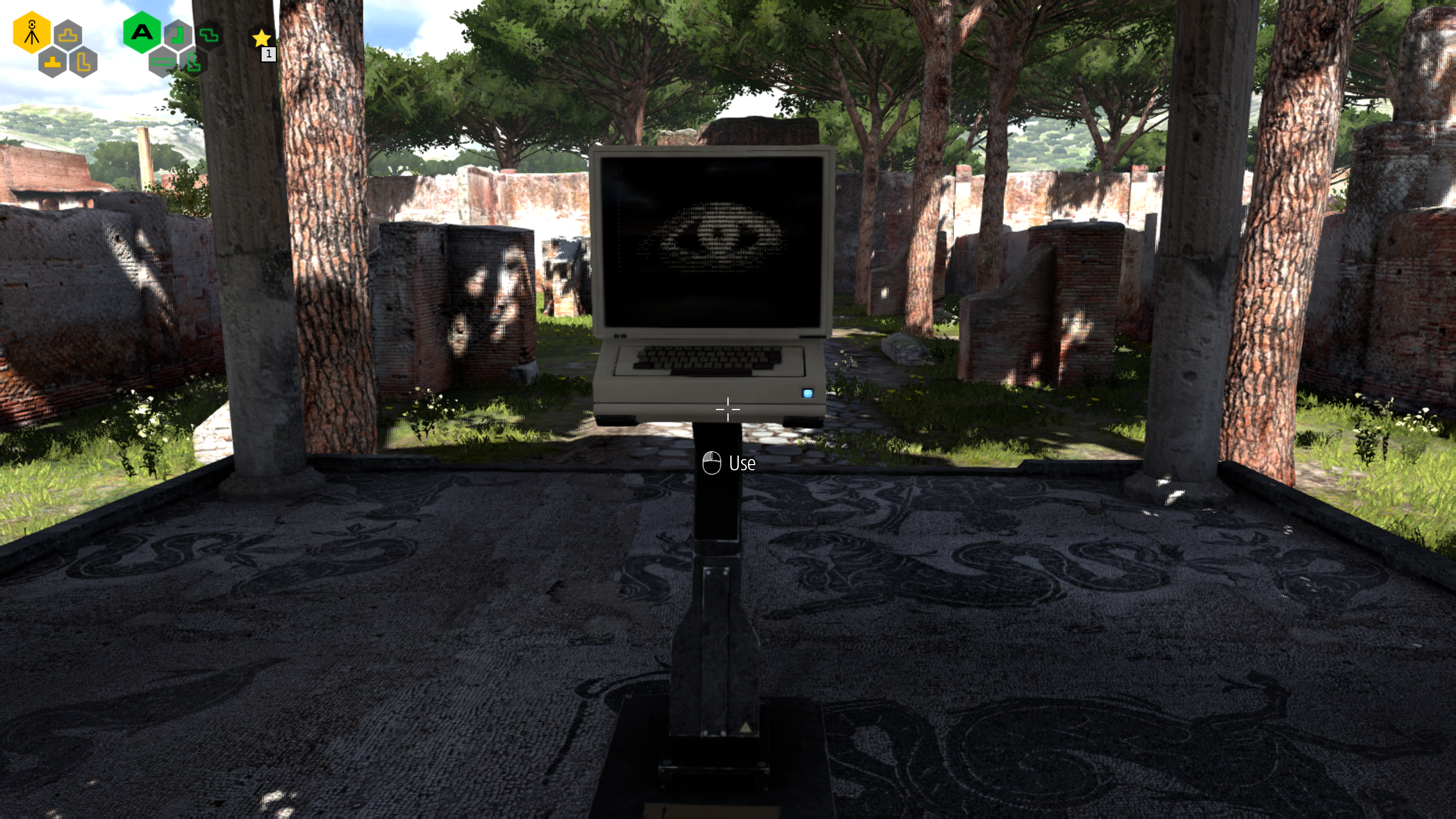 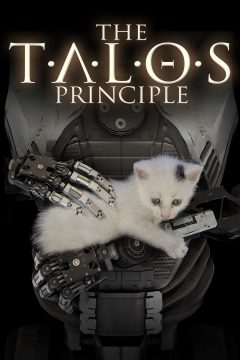 After Serious Sam 3 released, Croteam put out a short little experiment with various mechanics they were toying with for a possible Serious Sam 4. People liked what they had, but they also didn’t feel like these were gameplay elements that belonged in an explosive mob shooter. The team ended up making complicated puzzles with these new development toys, so the team decided to make a new IP that would allow them to go all out with this, putting Serious Sam 4 on the back burner awhile longer. Croteam even brought on two new writers, Tom Jubert (who was the narrative designer for Driver: San Francisco) and Jonas Kyratzes, a German indie game developer and writer. The latter did such a great job with this new game that he landed lead writer for Serious Sam 4, and he more than earned it. 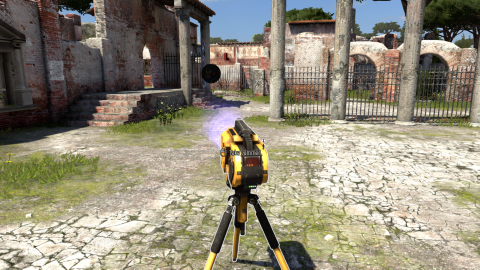 The game that resulted was The Talos Principle, the most critically acclaimed game Croteam have ever put out, and a steady seller for years due to the shift to puzzles giving it a completely different audience appeal from Serious Sam, something that wasn’t just an event to front load but something unique that caught tons of word of mouth over time. This is kind of funny because there’s a ridiculous amount of Serious Sam DNA left over, ranging from the near exact level of movement from Serious Sam 3 to reused graphical assets and even sound effects, including the iconic kamikaze yell. Even the minigun laser turrets from SS3 make a return. In play and narrative, however, it is indeed a completely different beast and arguably one of the best puzzle games made in the past decade.

You play as some sort of android in a realm controlled by a voice in the sky that acts like a god, able to control the world around you. The amount of glitching gives away that this world is artificial, but it’s not clear what the role of your character is or why this world exists. That gets answered slowly by reading files from various computers scattered around the world, talking with another intelligence through said computers, and a few audio logs scattered around. Needless to say, it is far more complicated then it first seems. 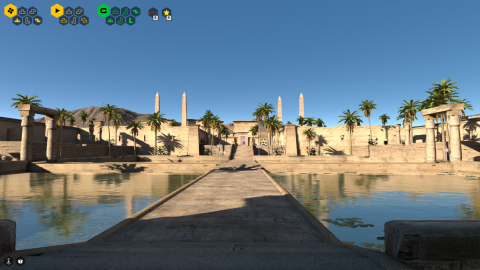 The Talos Principle is fascinating if you’re into philosophy, as the other intelligence you chat with is often most interested in debating you. There’s constant questioning about what it means to be a person, what consciousness is, and all that jazz, getting to the heart of the question often requiring you to go against the seemingly benevolent god ruling your reality. Every ending is interesting to boot, including an extra one unlocked for finding hidden stars and beating extra puzzles that brings up an interesting counterpoint to the regular best ending. You can see the hope at the edge of disaster narrative bones of Serious Sam 4 forming here, though while that game was more interested in the emotional reality, this one tries to work through it with thought. There’s also a DLC campaign from another character perspective that further fleshes all this out as well. Also worth noting the Serious DLC, which replaces that virtual god with Sam “Serious” Stone, originally an April Fools joke that you can now patch it for three bucks.

Perhaps the best comparison is Portal, but the focus on portals shifted to lasers. Instead of a funnel to the end, you go through various level hubs and beat puzzles to earn collectibles to unlock more, mainly tetrominoes called “sigils” used for lock puzzles. Each puzzle has a title that appears when you enter them, usually giving a hint to the solution. Solving puzzles is based around using the tools in the given level, like the jammers that stop electronic devices like barriers and turrets, little prism stands that let you refract lasers, and even some rather high concept stuff like a replay machine. The game is giving you new tools at a regular pace too, keeping things from becoming stale right when it’s headed in that territory. 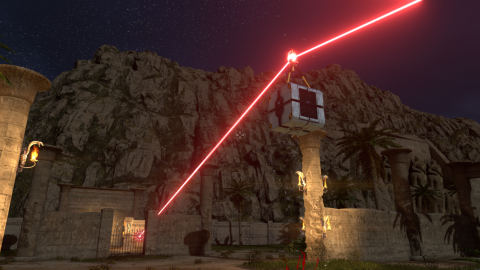 These are quite good brainteasers too, allowing you to take your time and minimizing getting yourself locked out of progress – and the few times that’s possible, you have a puzzle restart button you can hold to try again. Even dying just resets the puzzle and lets you tackle it again as much as you want, learning more with every try. It’s very much unlike the momentum obsessed final puzzles in Portal, made stronger by the game having no oddly out of place boss battles. The conflict of the game is entirely between differing points of view among a bunch of people with a shared goal, and the conflict is not solved by fighting but getting you to see their perspective. It’s refreshing, as is giving you fast Serious Sam style movement to let you move through large puzzles easily, down to a nice bunny hop, avoiding any drag.

It also cannot be stressed enough just how much positive buzz this game has enjoyed. It’s one of the few games that Yahtzee is willing to break from persona to praise, not to mention the string of 8s and 9s in its review scores. Alexander Bruce, the creator of indie puzzler Antichamber, is even a big fan as well. It’s both a fun time and surprisingly smart in what it has to say and the ideas it wants to explore. The sheer amount of mileage Croteam got out of such a simple set of mechanics is incredible, especially in how they managed to keep it easy to understand and constantly engaging. 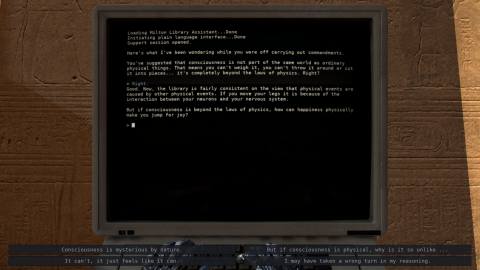 There’s been word of a sequel for a long while now, supposedly now the focus with Serious Sam 4 finally out. Keep an eye out and play the original before or if that day comes, because there are few puzzle games as dense as this one. The Talos Principle is just straight up good in every area it counts.