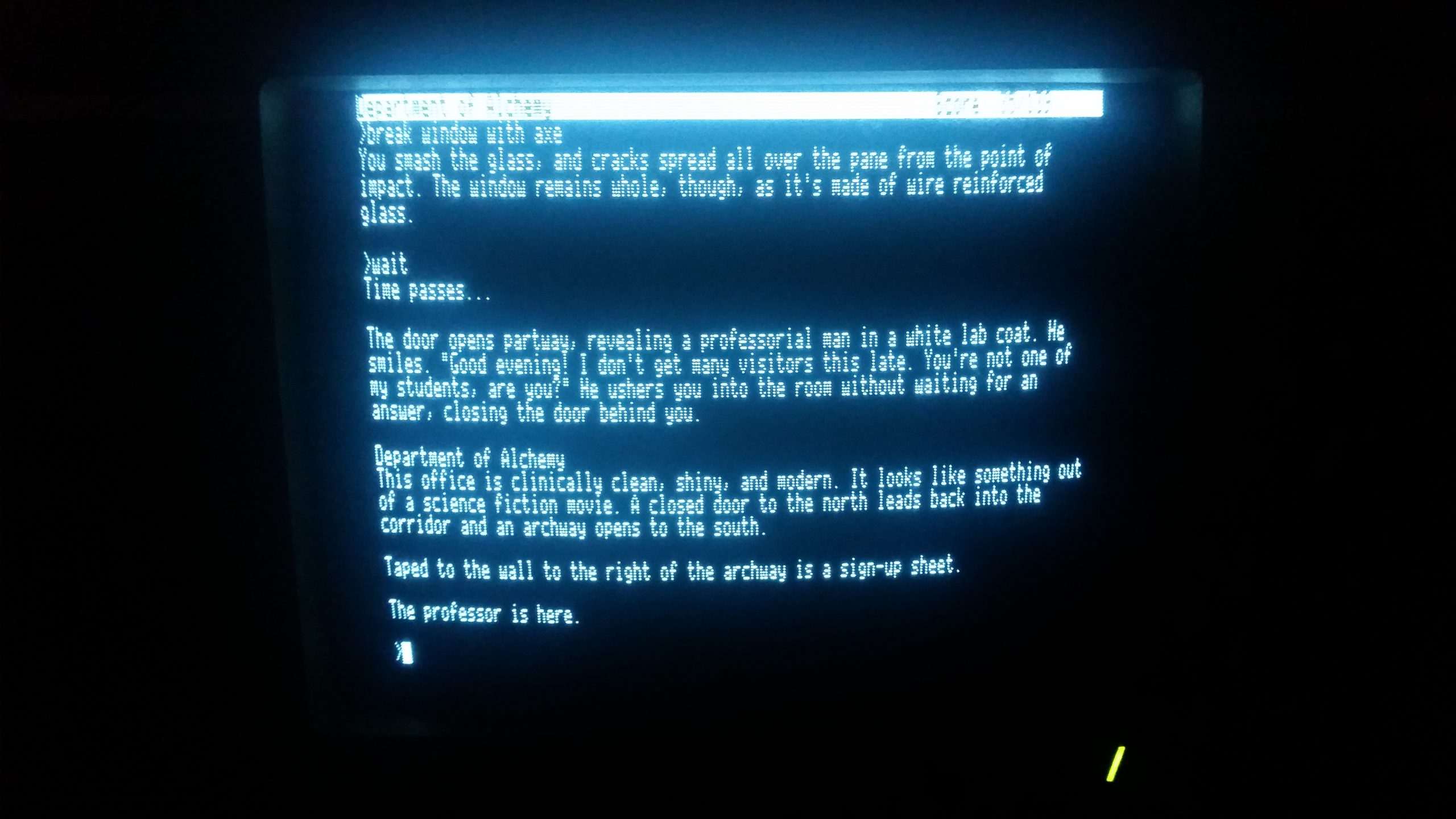 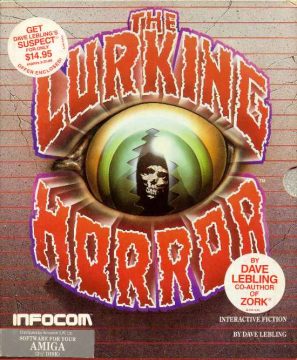 Infocom created some of the best text adventures of the 80s, starting with the seminal Zork fantasy series, branching off into comedy and sci-fi with Planetfall and Leather Goddesses of Phobos, and mystery with The Witness and Suspect. And yet (this applies to the rest of the adventure game genre) there was a curious lack of horror games during this time, with one of the only similar titles being ICOM’s The Uninvited. The only one in Infocom’s entire library was their 1987 release The Lurking Horror. This was designed by Dave Lebling, one of the designers of Zork and also one of the founders of the company.

The story takes place at GUE Tech, a reference in name to the Great Underground Empire from the Zork games, but also an explicit analogue for MIT (Massachusetts Institute of Technology), the school attended by many Infocom staffers, Lebling included.  It’s the night before your term paper is due, causing you to scramble to the computer lab, while a blizzard has covered the campus with an extraordinary amount of snow. If your luck couldn’t get any worse, your paper seems to have been overwritten by the ramblings of an insane person, much of which seems to revolve around resurrecting some mysterious, otherworldly entity. Your investigations place the source of this particular document as being the school’s “Department of Alchemy”, something which obviously shouldn’t exist in a school of science. But this, along with a weird dream you have after reading the document and a reference to a mysterious student suicide, gives clues that something sinister is going on. 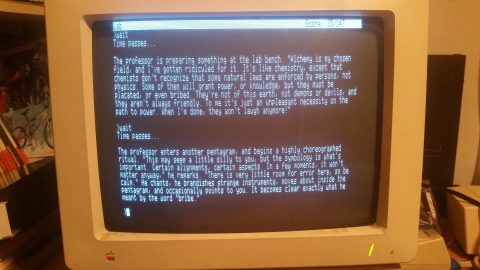 After this introduction, wandering around the GUE Tech campus feels a little mundane. As a result of the blizzard, much of the school is empty, save for a surprisingly helpful hacker in the computer lab (who responds kindly to reheated Chinese food), some janitorial staff, an urchin that scampers around the school grounds, and of course, the crazy professor at the root of the document you stumbled upon. As a result, wandering around the halls feels much like exploring a dungeon in a typical fantasy adventure, particularly seeing that many areas are connected via steam tunnels or decrepit basements.

The layout of GUE Tech is also inspired by real life locations from MIT, including the Infinite Corridor, a 0.16 mile hallway linking several of the school’s buildings, as well as a locale known (at least in the game)  as the Great Dome. The manual (presented as a guide to campus life) even gives a shoutout to a real life Chinese restaurant that was a favorite haunt of the designer during his school days. Even the “Department of Alchemy” was based on a real life practical joke. However, in spite of the love displayed in replicating Lebling’s alma mater, the game is at its weakest when you’re doing game-y stuff, like pushing around boxes with a forklift and simply collecting essential items that you’ll need later in the game.

Plot-wise, outside of the introduction, the first major sign that something is truly amiss is when you need to pass by a custodian who’s buffing a school hallway. This proves impossible, so you need to take an axe and cut the power cord. He doesn’t just yell at you, like a normal person would, but instead approaches and attempts to murder you. This means there’s either a dark force controlling him, or the school is terrible at vetting their hires. Weirdly, the solution to getting past him is to pour a huge container of wax on the ground, causing him to slip and slide so he can’t reach you… a rather comical solution to an otherwise grim scenario. There are a few other mildly silly moments too, like when you reanimate a severed hand, like The Addams Family. 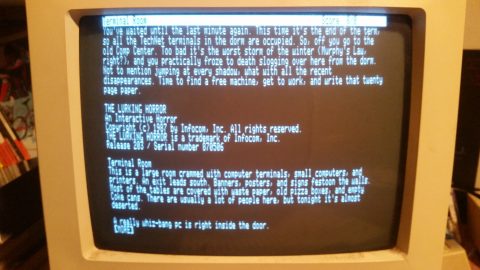 The rest of the game involves confronting the professor about his ritual while avoiding being sacrificed, and then banishing the horrible creature itself. It’s pretty obviously inspired by H. P. Lovecraft (more the appearance of tentacled cosmic horrors than the overt racism), predating any of the actual Cthulhu video game tie-ins by a number of years (though contemporary reviews were more eager to compare it to Stephen King, as the actual writing is nothing like Lovecraft’s). Like most Infocom games, the writing and descriptions tend to be pretty straightforward, resulting in an occasionally dry sense of humor, when it says basically things like (paraphrased) “You’re outside in the deep snow, and oh also, there’s a winged demon just sorta flying around”. The text rarely gets gruesome, though, even during the death scenes, with the scares coming more from the stark, lonely atmosphere, and an escalating sense that things just aren’t right. The Amiga version also support digitized sound effects for certain events and actions, though there are only about a dozen of them. They do play suddenly though, as the entire rest of the game consists only of silence and the player’s keyboard taps, so they’re good for occasional jump scares.

There are, of course, many design issues typical of text adventures from this era. Infocom’s text parser was always stronger than most, but there are still a few irritations, like having to type in microwave commands one digit at a time. There’s a limited inventory, too, and if you drop anything, there’s a good chance that the urchin wandering around will pick the item up and steal it, causing it to be lost forever. There’s also a time limit, your own energy, and if you fall asleep, you’re done, with only a single Coke bottle giving you the needed caffeine to extend your alertness. A few sequences also require entering precise commands (like when you’re in the middle of a pentagram about to be sacrificed), so you may need to die and replay these segments until you figure out what the game wants.

Still, everything The Lurking Horror sets out to do, it does effectively. It’s a bit boring during its lulls, and while it’s never really scary, it can be impressively creepy at its best. Overall, it still remains one of the highlights of Infocom’s library, in spite of often being overshadowed by more popular titles.