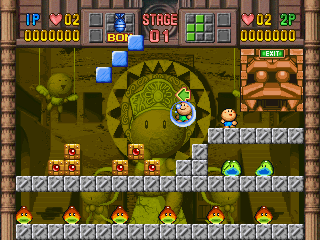 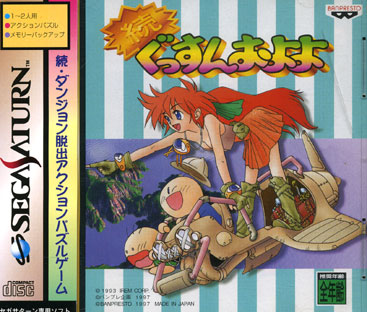 Not content with the twilight years of the SNES, Banpresto finally moved their act to the next generation with Zoku Gusson Oyoyo for the PlayStation. The Sega Saturn port followed in January of the next year. This amazing release puts Xing to shame.

The graphics have been completely revamped, featuring new sprites with better animations and lush environments. The music and voices sound great, making the whole experience warm and fuzzy. The difficulty has been smoothed out completely. It’s still a tough nut to crack, but you won’t want to kill yourself at the end of the day. The enemy respawns now have ample warning, the water isn’t so quick to rise, and extra lives are more plentiful.

The storyline is kinda new with some liberal lift from the second SFC title. Strangely, George isn’t in this game. The stage map looks nice, the animated tiles are appealing, etc. You’ll appreciate all the little additions that make the whole experience stand out from its brethren. Banpresto also added some cool new modes. There is a better Versus Mode with new ideas remixed from the SNES sequel. You’ll notice Puzzle Mode makes a triumphant and welcome return. There is also a single-player Survival Mode that makes the Tetris allusion complete. This mode is pretty laid-back for those of you that want to relax and zone out. For the masochists, the last new mode presents a challenge that is more focused on killing and staying alive in a frantic environment.

Sometimes this title is (erroneously) referred to as “Tsuzu Gussun Oyoyo”. Sometimes it’s even credited to Xing instead of Banpresto.