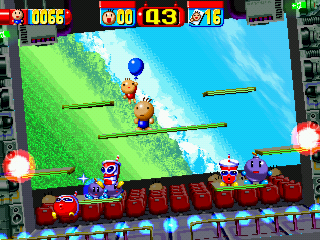 After all these remakes and ports, Irem stepped back into the ring. Their idea of a sequel, Gussun Paradise, is… perplexing. It’s a sequel to Gussun Oyoyo the same way Rainbow Islands is a “sequel” to Bubble Bobble. The gameplay has been completely up-ended, transforming it into pure platforming craziness without any puzzling whatsoever.The premise is different from the usual earthquakes and volcanoes bringing in an ocean of pain. This time, the demon YoYo has created a wacky amusement land purely to torture our main heroes. As always, Emily is there to cheer you on (George is gone entirely from the series at this point.)

The idea is to clear each stage of enemies. You can use a party popper to daze your victims. You then bring them to a nearby bomb and set it off. If you hold down the attack button, you can pick up and throw enemies and bombs into each other. You can also grab an unsuspecting friend and use him as a projectile. He probably won’t appreciate it.

Once all the enemies are dead, you move on. Each world has pretty different mechanics. In one area you might deal with scrolling platforms; in another you must deal with the screen flipping every which way; yet another has ski chair lifts bringing enemies in from warp doors. Each world also has unique enemies that play with the idea of the new mechanic. You’ll recognize a lot of these enemies from Gussun Oyoyo, but this time they’re nipping closely at your heels. You will soon hate snowboarders. And giant mecha. And missile subs. And firecrackers. And….

To get a helping hand, collect the power-ups (hilariously presented as inner tubes) which let you fly around or fire lasers. Getting a game-over is no big deal since you have infinite continues. Even when you do run out of lives, the game gives you 10 seconds to try and clear the level anyway.

With so many unique locales, cute animations, relentless action, and crazy ideas, this title can’t come highly recommend enough. It may not be the Gussun Oyoyo you know, but it’s a damn fine game. It’s got that magic 2-player co-op formula that will have you both laughing in stitches as muddle your way to the final boss.

Gussun Paradise is the only console game of the entire bunch to get an English release. It was pushed around Europe by JVC Digital back in 1999. The localization was pretty minor; the voices and names were left unchanged. It’s nearly identical to the original.