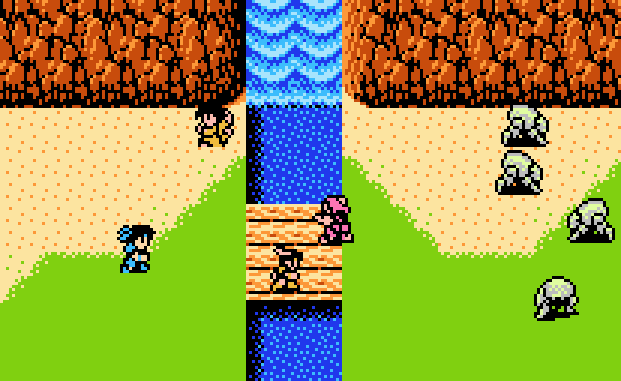 Radia Senki: Reimeihen (translated as “Chronicles of Radia War”) for the Famicom is one of the many great RPGs that never made it stateside. This 1991 Tecmo classic is unique for games of its era, as its style of play mostly reminiscent of games by Tri-Ace (Valkyrie Profile, Star Ocean, et al). Compared to many RPGs of the era, this one holds up better than your average title and is still enjoyable over fifteen years later. 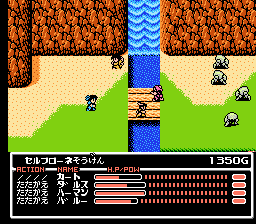 The game starts off with a classic Tecmo style animated cut scene, quite reminiscent of Ninja Gaiden, showing the flight of Princess Lefis of the legendary kingdom of Ark. Before she can reach her destination, she’s shot down by her villainous half-brother, Gaidess. And thus war breaks out between the lands Lemuria and Samara, who both battle to control the fabled Radia Tower, which holds the power to shape the world. Incidentally, the name of Lemuria, much in the vein of Ys or Atlantis, was another one of those sunken and lost civilizations, this time located near India and Madagascar. Though like in Ys, the real world mythology plays no real bearing on the events of the game.

Just before all this happens, you wake up in a forest, surrounded by monsters. You have no memory of who you are or where you’re from. Before getting eaten, you’re saved by Darus, a wandering mage, and things start off from there in a plot that involves sealed towers, an evil empire, and a deadly flying ship. These elements – amnesiac heroes, battle to control the world – have since become rather tired in the realm of video game storytelling, but there’s a twist or two near the end that brings to mind the likes of Final Fantasy X. The story is pretty well told for an NES game, and there’s even an option to converse among party members, giving the characters some flesh to their sprites. 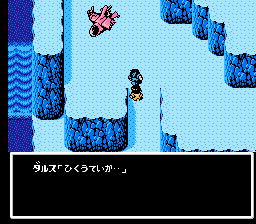 The game’s battles are randomized to a certain degree. As you walk about the map, you’ll step into trigger squares that launch pre-determined battles against enemies. (This should all sound familiar if you’ve played Chrono Trigger.) The screen may shift a bit, but the map you walk on doubles as the battle map, framing the limits of the battle arena. Unlike a vast majority of RPGs during the Famicom era, the battles are all real time, and feel very similar to a slower-paced version of The Legend of Zelda.

You can only control the hero, who can attack, use items, cast magic spells, or order a variety of tactical commands. You can order all of your allies to fight, or command them to regroup at a certain part of the screen. There’s also a rather humorous “trick” option, where instead of running from a foe, you play dead to opt out of a battle. Commands for individual characters can also be issued, allowing your party to attack freely, retreat, move to practically any part of the screen, or attack a chosen enemy. Compared to action-based RPGs of this sort, you have a lot of control over your party (more than more modern games like Star Ocean 3, oddly enough), although the battles usually involves you letting the artificial intelligence control your allies as you charge into the fray yourself. Alas, your friends aren’t always too smart and can sometimes get stuck in the scenery, and all of the sprites on screen can cause a whole lot of flickering. 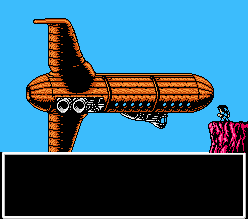 Battles are fairly easy, though it’s possible to get killed or lose a party member or two if you’re not careful. There’s an abundance of healing items scattered through the game, many of which are found as treasure chests or as battle rewards. Furthermore, you have access to powerful spells, which can be divided into four types: Healing spells, which heals the whole party for full HP; Attack spells, which are useful for clearing out or softening up hordes of lesser enemies in a hurry; Utility spells, which may stun enemies or switch your position around on the battle map; and finally a single spell that whisks you out of dungeons. Each character other than the hero may cast up to four different spells that perform a mix of the above options, and cast those spells a number of times dependent on their level.

Spells are gained by activating scrolls found in chests or in houses (or by the game’s end, they may be purchased in shops). Attack spells, while useful for leveling up and getting through dungeons, are useless against the game’s few bosses, who usually provide a bulk of the game’s challenge. The HP gauge on the bottom of the screen doubles as a spell meter. The bars to the right of your hitpoints slowly refills after casting a spell and must reach all the way to the right before you can cast again.

Most the game’s bosses are Samaran mages. The most challenging foes teleport around or use spells to stun your party members. The easier ones can simply be cornered and pummeled into oblivion by the hero, which unfortunately makes the last couple bosses of the game somewhat anti-climatic. 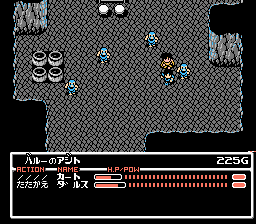 The game takes the usual role playing practice of looting homes and houses to new extremes. You can plunder chests, drawers, and bookshelves (simply by pressing against them with the D-Pad) to find hidden items, but you can also save and rest in people’s homes too. Simply walk up to the head of a bed and you’ll automatically rest, with a prompt asking you if you wish to save (the game gets small kudos here, stating “My memory is returning…” when loading up one of the three save slots). It doesn’t matter if you’re in a dungeon, someone’s home, or the local inn (which is always free), you’ll be guaranteed a good night’s sleep.

Unlike many RPGs, monsters rarely drop gold, so you’ll need to settle on selling the prizes that are left behind after being slaughtered. Meat is the most common source of income and also doubles as a minor healing item, making it one of the best things in the game (so let all Kingdom of Loathing fans here rejoice!) The only downside is that some item’s uses, like spells, aren’t clearly expressed within the game, requiring either trial and error or a guide. 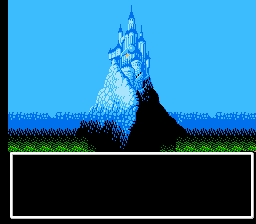 The game’s graphics are pretty standard for a NES game, so don’t expect to be awed. The cutscenes make the game’s visuals stand out a little bit more, although they don’t quite match Ninja Gaiden‘s quality. The sound is a mixed bag, with the themes catching the mood of various towns and areas as you make your trek. Often the theme in a particular area will change as things progress in the story, and the situation in various towns shifts from peaceful to dire. The best track in the game is the theme of “Powerful Nation Samara”, which actually adds a sense of oppression as you sneak into the enemy capital near the game’s climax, though the music in most of the later towns is also catchy. However, given the time spent traveling the various maps, the music can veer on the repetitive side.

Radia Senki is so remarkable because it’s clearly ahead of it’s time in practically every aspect. It’s truly one of the best NES RPGs that failed to make it stateside, along with the likes of Sweet Home and Megami Tensei II. An English release was advertised under the name The Tower of Radia, though this was never released. However, a prototype was found and released publicly. Before this had come out, a fan translation had been released separately. 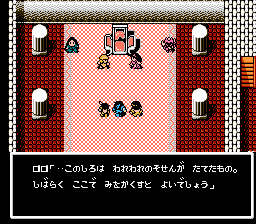 Anyone who enjoys any of Tri-Ace’s games would do well to check this out, if just to see where some of the mechanics originated from. Also look into Sorcerer’s Kingdom for the Genesis, which have similar battle systems (the latter is more turn based though, but made by the same people who brought you Langrisser).