Wait, this doesn’t look much like a Joe & Mac game! It technically isn’t, but the Japanese title is Tatakae Genshijin 2, officially making it a sequel. Outside of its similar premise and an occasional shared asset or two, it really is almost a completely different game. It forsakes the standard linear levels of the arcade game with larger, multi-directional scrolling stages that feel more like a console game.

The nature of the level designs is totally different, concentrating more on platforming. Even the graphical style is worlds apart, as it seems like this one is aimed more at younger kids, with a more cutesy art style and complete lack of cave babes. The only holdovers include some similar themes, like exploring the innards of dinosaurs, and the ability to super jump. 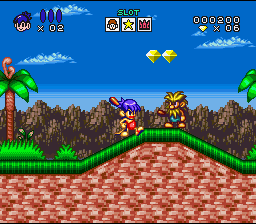 Instead of Joe and Mac, here you play as a caveman named Congo (Rookie in Japanese), apparently the duo’s ancestor. He’s kind of an evolutionary missing link, as he still has a tail. Whenever you get hit, you devolve into a monkey, and the next hit will kill you. Scattered around the stages are red gems – if you’re a monkey, it’ll upgrade back to a human, but if you’re already human and collect three of them, you’ll activate a more powerful form. There aren’t any projectile weapons, forcing you to rely on your dumpy little club.

Each world is filled with yellow gems, which, naturally, will give you an extra life when you collect a hundred of them. The two-player simultaneous mode is missing, forcing you to trade controllers if you want to play with another person. The game is divided into six worlds, each with four levels. Once you complete the first world, you can tackle the next four worlds in any order before moving to the final stage. 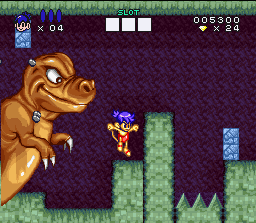 While Congo’s Caper isn’t a bad game by any stretch, it ends up feeling like a competent-but-remarkably average SNES platformer, which are a dime a dozen on the system.