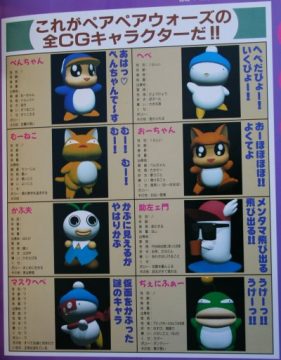 Yet another puzzle game starring Hebe and his friends was supposed to come out for Neo-Geo, which already housed Sunsoft’s Galaxy Fight and Waku Waku 7. The objective apparently was to move the characters around the board to match pairs of identical tiles a la Shanghai, and Sunsoft already produced several games like that, having trademarked the name in Japan and all that.

Nothing is known about the reasons for the game’s cancellation, and allegedly it was never completed, even lacking an ending. A Pair Pair Wars prototype was supposedly found in possession of an arcade operator, but it was damaged in a flood, and the only known remnant of the game now is a flyer recovered in 2003.

As we can see from the few remaining pictures, the sprites and backgrounds were all prerendered graphics, as was common at the time. The title was to star Hebe, the other three pals, Pen-Chan, a cat boss, another Hebe clone with glasses and a scarf (Hipster Hebe?) and a turnip-headed thing.

In the 2000s Sunsoft, like several other Japanese companies, switched to the more profitable world of mobile games. Among dozens of Shanghai games – some with appearances of Hebereke characters – and other nondescript puzzles, Sunsoft repurposed several of its old titles including Hebereke, the falling block puzzles of the series and also O-Chan’s nonograms, to fit them on Japanese mobile phones. Speaking of mobile phones, there also exists an iPhone app that allows to read Ucchii’s comic strips on the go.

In any case, after the first game’s release in 1991, it quickly became popular to the point that Hebe became the company’s mascot, and as such he made several cameos in Sunsoft’s titles. For example, he appeared as a random encounter in the SNES JRPG Benkei Gaiden: Suna no Shō, and his name became a special password in Dodge Danpei for Famicom. He was also featured on the cover of Barcode World, a Famicom game developed by Epoch that took advantage of the Barcode Battler, that gimmicky add-on scanner which turned the info from barcodes into game characters. The game comes packaged with pre-made cards featuring several Sunsoft characters, including of course Hebe and friends, all decked in pseudo-Medieval fantasy gear.

Another interesting cameo comes from Sunsoft’s conversion of Lemmings for the Genesis/Mega Drive. This one adds to the usual series of levels a bunch of newly-made ones appropriately named the SUNSOFT series. They’re made with the same graphic tiles of the original game, except for level 18: much like a certain level in the original that paid homage to Shadow of the Beast, this one does the same to Hebereke, with the entire level made of the shapes of the four playable characters! The BGM is even a recreation of the theme from Hebereke‘s starting area.

Also released in 1994 was an album called Takusan Hebereke, which collected original versions of the soundtracks of Hebereke, Hebereke no Popoon, Sugoi Hebereke, a single arrangement from Oishii Puzzle, a bonus vocal track (named “Hebe and Oh-Chan’s Answering Machine”) featuring Megumi Hayashibara and Mika Kanai, but also tracks from another unrelated Sunsoft game, Gimmick!. This is the only official piece of merchandise of the series outside of Ucchii’s strips. 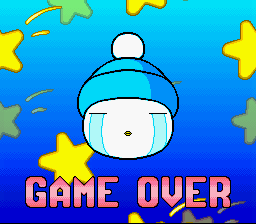