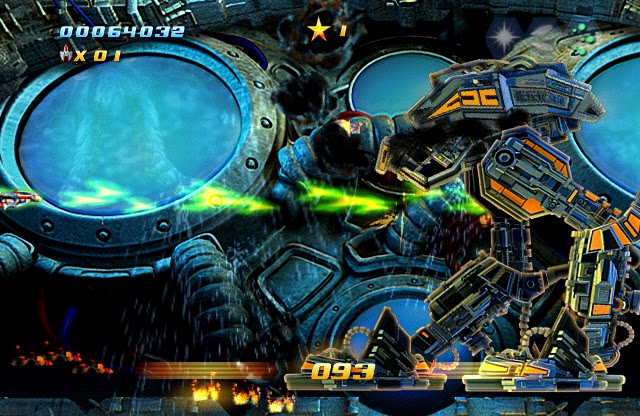 There is no shortage of post mortem shoot-em-ups for the Dreamcast, though few have been in development as long as Sturmwind, and for a while it almost seemed like it had become vaporware. Visually it sure was worth the wait; the combination of pre-rendered sprites and backgrounds with some 3D elements looks gorgeous and definitely makes for the prettiest shmup on the system. There is so much going on in the stages that at first it seems hard to tell which parts of the backgrounds are dangerous, but where that’s the case warning signs show up on screen.

After some brutal offerings like Last Hope, Sturmwind is a game everyone can enjoy. Normal Mode allows you to directly select any stages that have been reached once, and the lowest of three difficulty levels is quite moderate. Arcade Mode applies stricter rules, but isn’t that hard either. 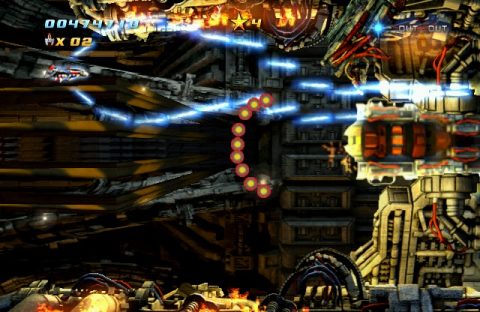 The weapon system vaguely resembles Thunder Force, but is more streamlined and at the same time more interesting. There are three very unique weapons: The Lichtblitz sends bent beams around the corners of the ship, protecting its top and bottom, but getting rather thin at range; the Nordwest is a pair of guns that swivel back and forth by releasing and pressing the fire button. The most powerful, the Rudel, just shoots straight forward. You lose the current weapon when hit, but the ship is only destroyed after losing its last weapon.

Lots of cool stuff can be done with these weapons: First and foremost, the left trigger switches their direction from front to back; this mechanic is so great it seems baffling why it hasn’t been used much more often. Each weapon also has a charged shot, but overheating destroys it. Some enemies drop weapon containers, which start out as a 1000 points bonus. Shooting them cycles through the three weapon types instead, adding a nice incentive for highscore runs. Collecting the same weapon type as the currently selected one upgrades it with one of two drones that add firepower and can also be switched between two positions, but other than in games like Gradius, they’re not indestructible. There are a few other bonus items that are rarer: extra lives, smart bombs and 2500 points bonus.

Scoring is mostly determined by enemy waves. After completely obliterating a wave of enemies, the words “Wave Bonus” appear on screen. Shooting down the letters before they disappear is rewarded with a star, which symbolizes a score multiplier. It’s not as complex as some other shoot-em-ups, but it does a good job at adding challenge without making things all too confusing.

Normal Mode almost seems a bit too long for prolonged score play with its 16 stages, Arcade Mode is shortened to seven. Each stage has its own boss, all huge, awesome and fun to fight. Sturmwind strikes a very nice balance between satisfying depth and offering a fun ride for more casual players at the same time; definite recommendation to anyone who still has a Dreamcast around. Music is mostly modern techno, with just a wee bit chiptune goodness thrown in.