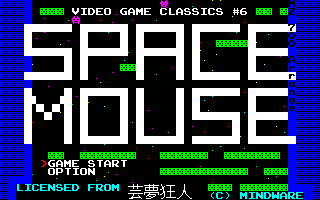 Space Mouse is the second of Mindware’s conversions of early 80s Japanese PC titles, originally published as a type-in program for the PC-8001 in 1981. It was written by Takanari Suzuki, who eventually went to work with Namco and then Enix, where he designed the two Jesus PC adventure games. (He even included Space Mouse as a minigame in the first Jesus.) 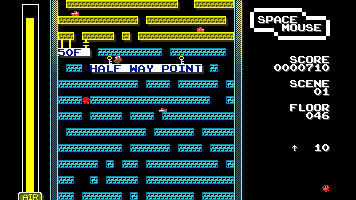 The goal in each stage of Space Mouse is to scale a massive tower, moving between the openings on each floor. Flowing downwards is a constant stream of enemies, who work on simple patterns – they’ll run forward, fall through any holes, and will only turn around when they run into an obstacle. This is easy enough to understand, but there are several of these bad guys flooding the level at any given moment, and they move fast, requiring both concentration and perfect timing to weave past them. 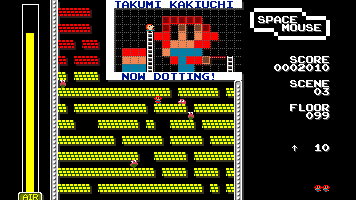 There are five basic modes that change up the visuals, sound, and some of the mechanics. The PC-8001 is faithful to the original computer versions, plus there’s another version in the style of the MZ-700. Both have “PCG” modes too, which change the character sprites. They’re cool for a retro throwback, the choppy tile-by-tile movement of the characters, coupled with the high speed, make it difficult to play. Plus, while the sound effects may be authentic, they’re often excruciating. In some of the modes it’s also hard to determine the difference between an enemy and a power-up. 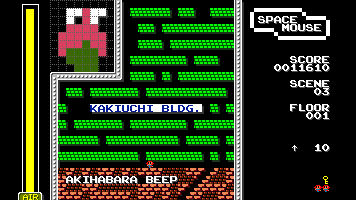 The NES arrange mode is probably where you’ll be spending most of your time. It has simple but charming visuals, a handful of excellent tunes (which sound more like MSX than NES music but that’s not really a criticism), smoother animation, and improved mechanics. For example, the persistently falling coins – in the PC-8001/MZ-700 versions, they let you plow straight upwards through several floors, but in the NES version, it also makes you temporarily invincible. Also useful are keys, which are used to unlock doors periodically found throughout, which can open up more coins, more keys, and occasional shortcuts. There are other additions to the level designs in this mode, including floors that can’t be broken, even if you have a coin power-up, or floors where only certain sections can be broken. 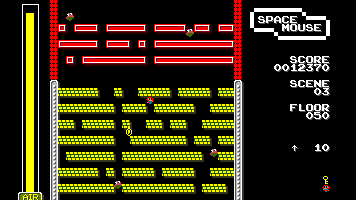 Incidentally, it’s hard to tell from the tiny sprites, but you’re actually controlling a cat named Alice, and the bad guys are mice, or rather, the space mice, as indicated by the title. There are only five stages, but certain areas have cute little details and call-outs to the developers and places, as one stage is supposed to take place over Akihabara Beep (a retro computer store) while another plugs the composer’s website, even allowing you to meet him partway through the level and let you change the song. Even the artist makes a few cameos, and it really adds a nice bit of personality. There’s also an infinite mode, unlocked after beating the main game. 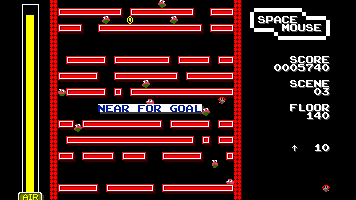 While the game is short (and the NES mode even lets you continue at the bottom of each stage), the real appeal lies in scoring, with the point breakdowns for each action helpfully broken down at the side of the screen. There’s even an infinite mode, where you just try to climb as far as you can. The one main downfall with the Steam release is the lack of any leaderboards. Also, by default, the controls are a little touchy – if you press Up while a solid ceiling is above you, you’ll automatically move to the sides, which can cause imprecise movements when you’re climbing through holes. You can turn off the “Move Assist” option to disable this though. Overall, it’s a fun and charming little title.

Steam page
Retrogamerz A Japanese blog about the PC6001 original
Youtube – TRS-80 A conversion to the TSR-80 computer.
Spillhistorie – Interview with Mikito Ichikawa A chat with the Mindware president. 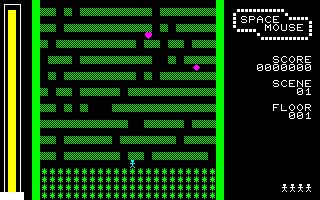 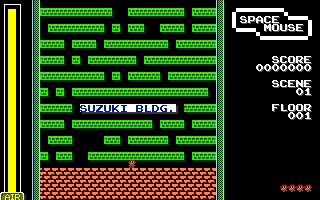 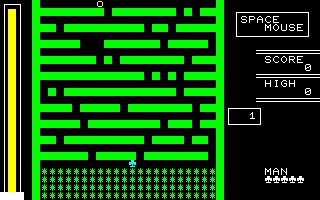