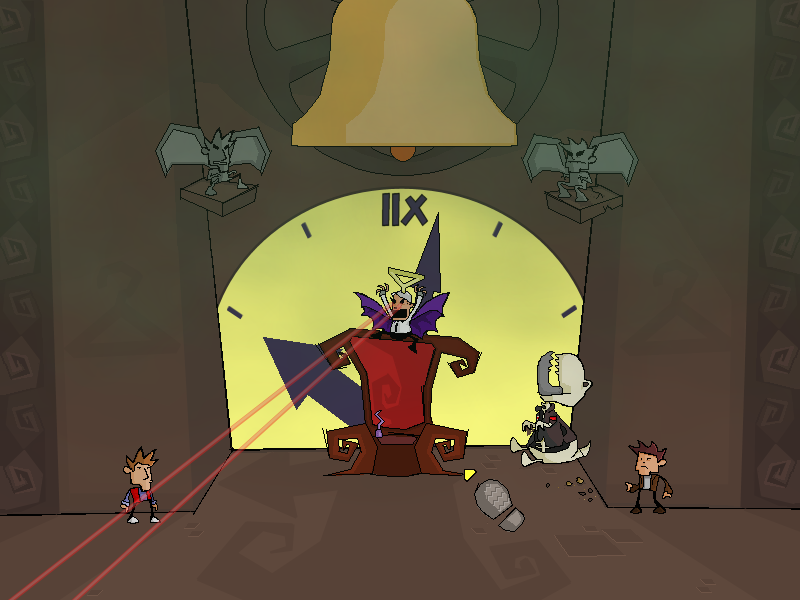 Time Gentlemen, Please! begins with an intro cinematic that slightly embellishes some of the events of its predecessor, before picking up right where it left off. At the end of Ben There, Done That!, our heroes learn that the aliens that kidnapped them were really versions of themselves from the future, who were carrying out a particularly diabolical plan of world domination. Due to the flimsy nature of time travel, Future Ben and Dan vanish into a puff of paradox, leaving Present Ben and Den, unwilling to rule the world, to pick up their pieces. With the powers of the Time Stick, the two devise a brilliant plan to travel to the past and stop the invention of the coat hanger, thereby eliminating the item that got them in this very predicament in the first place. Through a series of misadventures which aren’t entirely explained, the Time Stick somehow winds up in the hands of Adolf Hitler, who uses it to screw up history even further. The entire game is spent climbing out of the hole our boys have dug for themselves, mostly by skipping through the ages via a series of rips in the fabric of space and time. 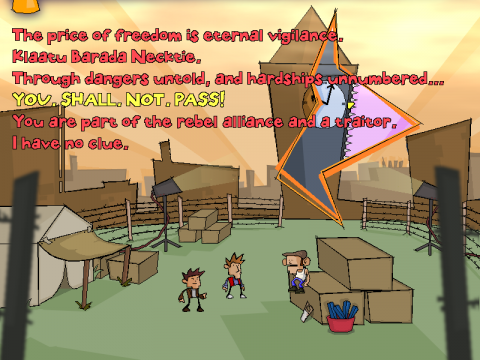 Time Gentlemen, Please! is certainly much more involving and better structured than its predecessor, which created an (intentionally) flimsy excuse to get Ben and Dan into wacky predicaments. Here, it’s a bit more focused, with about a dozen locations in total, easily accessible from a map screen. The ultimate goal is to infiltrate Big Ben which, in the future, has been converted into a vicious, trap-filled tower. Technologically it’s a bit improved too, with the game running in 800×600 resolution, plus nicer icons and bigger fonts. The visuals still maintain the same slapdash look, but the backgrounds are more refined. There’s actual music in each location too, which does a lot to make everything feel more alive.

There’s a laundry list of oddball things, from dinosaurs to robots to Nazis to Nazi dinosaur robots and so forth, and a lazier game would be content that its wacky quotient was suitably through the roof. Time Gentlemen, Please! goes pleasantly over the top, though, such as their portrayal of Herr Hitler. How do you make the most despicable human being in history even worse? By turning him into a pedophiliac vampire, apparently. One of the kookiest gags is the “Racism” slider in the Options menu, which doesn’t really seem to do much of anything, although it’s impossible to set to absolute zero – a self acknowledgment that yes, Germans probably shouldn’t take this too seriously. 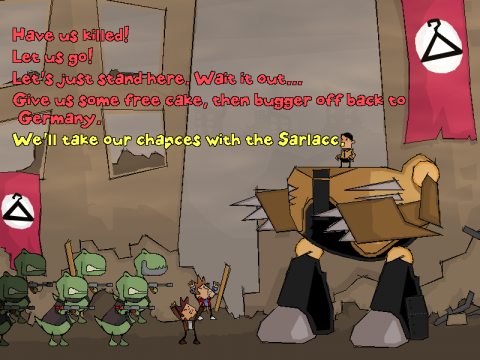 But like its predecessor, it keeps its spirit through both affectionate parodies and cleverness. There are still plenty of LucasArts references – apparently with all of the time travelling, Star Wars is now a 1940s cult film directed by Ed Wood, and there are even references to Labyrinth, a film which Lucas and company have been happy to ignore. At one point, Dan suggests different ways to proceed through the adventure, based on WITS, FISTS and STEALTH, a reference to the three paths in Indiana Jones and the Fate of Atlantis. (Fans will recall that the trio should be WITS, FISTS and TEAM, which Dan will note despondently.) Your choice doesn’t actually affect the flow of the game, although it does change a few running gags.

The most clever parodies aren’t the ones where Ben and Dan acknowledge their wacky situations aloud, but rather when the wacky situations acknowledge themselves. Upon talking with a guard dinosaur who needs to be disposed of, he mentions that he can’t go back to his house because it’s infested with a rat. No problem – give him a mouse trap and he marches right off, only to be replaced immediately by another dinosaur who proudly announces, “Man, I love spanners!”, making for a quick and easy puzzle. Ben even refuses to get into a conversation, claiming, “I don’t want to get roped into a conversation about spanners.” 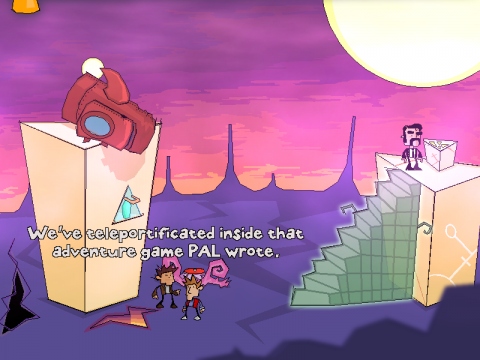 There’s a bit more to distinguish the leading characters this time around, who sort of blended together in their first adventure. The highlight is when Ben finds himself disabled and Dan is put in the limelight – he immediately panics and fumbles his way through the next set of solutions, until deciding that it’s probably best he stay as a sidekick. Some of the sillier secondary characters include Eckles, a sad old war prisoner who seems predestined to be shot in the cock, and the Sex-Ed Clown, who teaches about the horrors of unprotected sex via balloon models. (For fun, ask him for one in the shape of AIDS.)

This being a story revolving around time travel, there are a few instances where you need to change the past to fix something in the future, with the usual bizarre effects. There’s also a strange machine which can age or de-age any item, either returning it to its original state (presuming it’s worn or broken) or inflicting upon it the ravages of time. So, flip it to “age” and stick in a pig to turn it to leather, or flip it to “de-age” to turn a severed skeleton arm to a severed fleshy arm. The results are intentionally unpredictable, which is why it’s such a weird device, but its over usage causes it to become a bit tedious throughout. 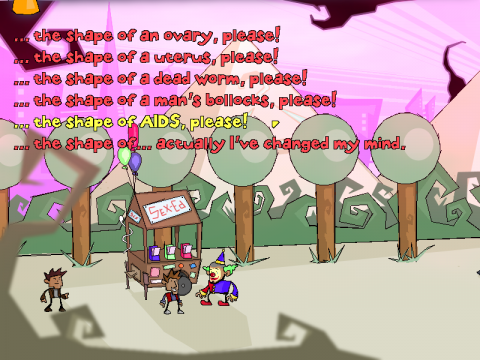 The cleverest bit is when the duo discovers an unfinished text adventure, The Space Adventures of W. T. Pal, A Human. Their shenanigans puncture an even deeper hole in the time-space fabric, eventually plunging them right into a visual representation of this game-within-a-game. The hero is an intrepid Victorian-era explorer named William, who is ultimately helpless without Ben and Dan’s intervention, and can only be controlled by zapping back to the “real world” and taking on his persona through the text adventure on the computer. It’s all very pleasantly meta. There’s also another retro point-and-click adventure game where you control Hitler, one of the many puzzles to conquer the innards of Big Ben. Of particular note is the “Invade” verb, distressingly amusing when used on the toilet. (Something about having already invaded “poo-land”. Awful, yes.)

There’s no doubt – this is one of the funniest, most clever adventure games ever made. With Time Gentlemen, Please!, Zombie Cow Studios elected to go “professional” and charge £3 (or $5-ish) for it. It’s more than a fair trade. Sadly, a planned third game, Revenge of the Balloon-Headed Mexican, was cancelled due to creative issues, but better to let it go out on a bang that die a slow, dragged out death.