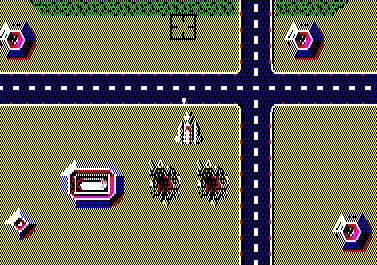 From its humble origins in the Japanese computer scene of the mid-1980s, the Thunder Force series managed to stand out among a plethora of other shoot-em-ups, as the flagship franchise of Technosoft. After a brief computer stint, the series flourished on the Sega Genesis, during the height of the scrolling shooter’s popularity in the late ‘80s to early ‘90s. In the 32-bit days, the series was given a modernized look with the implementation of 3D graphics, while retaining the tried and true classic shooter gameplay. The most recent installment for the PlayStation 2 is very much in the same vein. 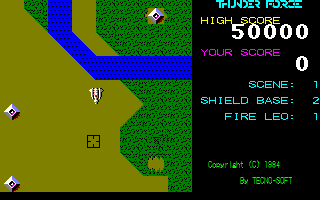 Besides its own little quirks (such as the overhead stages in the earlier games), there isn’t much the Thunder Force series does to deviate from the basic formula established by forefather horizontal shooters like Gradius or R-Type, leaving them open for criticism as being too “generic“. Regardless, their appeal lies simply in the fact that they’re just well crafted and refined games. With their attractive aesthetics, intimidating bosses, relentless enemy waves, and quality soundtracks, they offer an experience that average, less inspired shooters often fail to match. This experience is also due to the fact that Thunder Force gives the standard Gradius / R-Type format an adrenaline shot in the chest, as the gameplay is generally much faster paced. The result is a harmony of the twitchy, reflexive gameplay commonly found in many modern shooters with the pattern memorizing / positioning emphasis in the classics. It is quite a rush to maneuver through Thunder Force‘s caverns and narrow passageways while dealing with enemies that seemingly come out of nowhere and throw gobs of fire at the player. There are no checkpoints either – when the ship is destroyed, another one takes its place almost immediately, sometimes before one can even figure out what got it killed in the first place. Losing all of the lives, however, sends the player to the beginning of the stage, provided there are remaining credits.

Most Thunder Force games have two default weapons – a regular, forward firing gun and a rear-firing laser. Since the ship is thus armed to fire in both directions, enemies often attack from both sides, forcing the player to switch back and forth. There are also several other weapon power-ups, which can be selected at any time. When dying, only the currently equipped weapon is lost, so one can build up a sizeable arsenal for sticky situations if one plays the cards right.

The basic plot of Thunder Force deals with an area far away from Earth, where the inhabitants of the Galaxy Federation are engaged in war with the evil ORN Empire. To defeat ORN, the Galaxy Federation creates iterations of their “Fire Leo“ series of high performance fighter craft and sends them out to fend off ORN’s forces. The series has six main installments, plus an arcade spin-off that was later ported to the Super NES, and two compilation packs for the Saturn.

Not many Westerners have played or even know of the first Thunder Force, since it was released only for obscure Japanese computers. It was developed by Katsunori Yoshimura, who later left Technosoft to found Arsys, which developed impressive computer titles like Wibarm and Star Cruiser. First released in 1984, the format consists entirely of free directional scrolling overhead stages where you fight airborne enemies and bomb ground targets in search of a set amount of hidden shield generators. Once all the shield generators in the stage are found and destroyed, the game shifts to a screen where you have to destroy a portion of a large fortress named the Dyradeizer. Once this is done, you move on to the next stage and repeat. 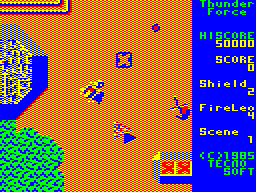 Each of the game’s versions look slightly different from each other. The PC6001 version is sort of blue and orange, and has the lowest resolution of all of the versions. The PC8801 and FM7 version have an overly blue color scheme, while the Sharp X1, PC9801, and MZ-1500 versions have the most varied colors, and looks the closest to what Thunder Force II would eventually turn out to be, four years later. All of the versions have somewhat choppy scrolling, with a huge portion of the screen taken up by the side bar, making it hard to see too far in front of your ship.

The gameplay is just as basic as the graphics, with the ship having an airborne shot and a crosshair for ground shots a la Xevious. Simple looking enemies and ground turrets attack you every now and then, and the stages are more or less all the same. Some versions add a few extra bells and whistles, such as the Sharp X1 version yelling “Thunder Force“ out loud at you when you start a new game. Some versions also have actual BGM, in the form of Gioacchino Rossini’s “William Tell Overture“. Some releases also come with a stage construction set that allow players to build their own levels. 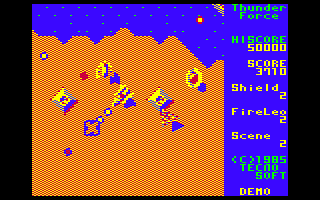 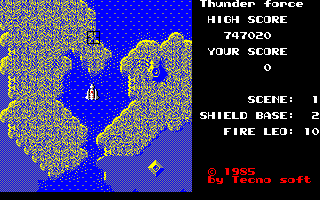 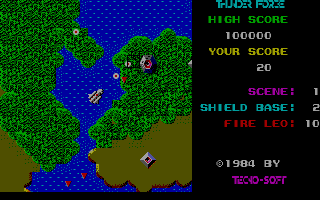 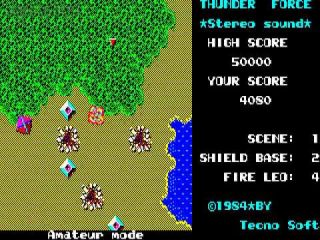 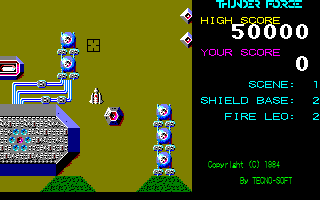