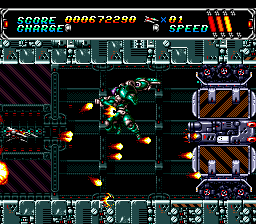 The Sega CD is an unfairly maligned system. It didn’t have a long shelf-life, was overpriced and the number of games released wasn’t massive, but it had more power under its hood than the PC Engine’s CD-ROM add-on, and it also received enough system-exclusives to now make it absolutely worth investigating as a retro system. In addition to Snatcher and several Working Designs RPGs, the Sega CD played host to a few really great 2D shoot-em-ups. One of the best was Keio Flying Squadron, and another was the curiously titled Android Assault: The Revenge of Bari-Arm, or just plain Bari-Arm in Japan, developed by Human Entertainment.

The game is a fairly typical seven stage horizontal shooter, though is pulled off with such class and attention to detail that it rises above many of its peers. There are four color-coded weapons, each of which can be powered up three times by collecting little POW items. On the third collection your ship transforms into a giant mecha. Although this increases your hit box, thereby making it harder to maneuver, it does allow you to take damage without dying – get hit and you just revert back to a ship. There are also Silver Orbs which instantly transform you into a mecha, regardless of weapon strength.

Mechanically it borrows from a large roster of other hori shoot-em-ups, especially R-Type and Thunder Force III. You can toggle between four ship speeds on the fly, much like Thunder Force. The levels, though horizontal, are also vertically tall, again akin to Thunder Force, or even Axelay‘s water stage, with the ability to scroll it by moving at the screen’s edge. Later on this plays a key role since you need to navigate some enormous maze-like levels at high speed.

One of the coolest aspects of Bari-Arm is the reverse R-Type charge shot. Leave the fire button unpressed and your weapon constantly charges itself, for a maximum of three colored bars. Hit the button and a super powerful attack is unleashed, in some cases lasting for the duration of those charge bars as they drain down. This subtle subversion of a well tried mechanic is utterly brilliant, since not only does it force to stop firing and play strategically, but the dynamics and sense of tension also change. Instead of holding down a button to charge a shot, with your muscles locked-in and reluctant to relax and release said blast, you first have to relax your hands, instead poising them to strike like a Cobra when the moment is right. With your right thumb unengaged the mind can focus a little more on maneuvering with the left thumb. It doesn’t sound significant, but for veteran shoot-em-up players it’s a noticeable shift.

Your standard spread shot, powers up to fire in reverse too. Generally excellent in a pinch and versatile enough for most situations. When charged it sends larger power balls across the screen which pass through barriers. The default starting weapon.

Starts off as a weedy little green laser which passes all barriers but doesn’t do much damage. Can be powered up to shoot 5 lasers in a wide spread. Charges to fire a thick power beam which lasts for the duration of your charge bars – unfortunately this means moving directly into the enemy’s line of fire to connect.

The coloring of the orb is similar to the Thunder Cracker. This fires homing missiles, and powering it up increases the number. Very useful but it’s stopped by barriers, making some enemies/bosses almost impossible. Charging it releases a fire-snake which homes in on enemies and lasts until your charge bars deplete – this is extremely useful since if it connects it does major damage. Unfortunately it has a tendency to home in on minor enemies or invincible parts of bosses, so use cautiously.

This weapon releases blue missiles in a vertical spread then sends them across the screen, but they’re extremely slow to emerge leaving you constantly in danger. The resulting splash damage when they connect doesn’t make up for this. Powering up increasing the number of missiles. Charging your shot releases a circular barrage of missiles, but these are difficult to aim and often miss. Absolutely useless weapon.

Throughout it features some excellent parallax scrolling for the backgrounds, another reminder of Thunder Force. There are also some incredible set-pieces to play through: along with the now mandatory battle through a fleet of spaceships level, there’s a great level inside a rotating space station, with the top and bottom of the vertically scrollable screen containing the station’s habitation, which then curves away into the background’s horizon. It’s really stunning. In another stage: one minute you’re in space, descending through a planet’s atmosphere, then cloud cover, then you’re plunging into its ocean to take on a giant mechanical fish boss in a beautiful ode to Darius. Every single boss in fact is fantastically designed, with large, asymmetrical sprites, full of tiny details. They really don’t do spritework like this any more. 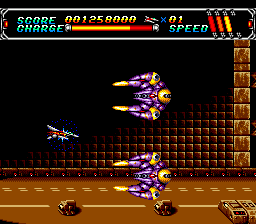 Coming on CD you’d expect the music to be good, and it doesn’t disappoint. It’s a hard-rocking soundtrack with a blend of pop-synth, like some 1980s hybrid between New Wave and Glam Metal, and it works so incredible well alongside the set-pieces and mecha design. It’s more subdued and lacks the wailing guitars of Lords of Thunder‘s soundtrack, but it’s certainly no less awesome.

Bari-Arm also provides a healthy challenge, since you can only set continues and lives to a maximum of five each. Which should keep even the weakest of players on their toes until the final showdown. This does highlight a glaring problem though: when selecting continue you restart at the beginning of the stage you died on, but instead of resetting your weapon to the default Thunder Cracker, you stick with whatever you had albeit at its lowest level. Meaning if you died holding the Burning Wave you’ll restart with a single beam, and you’re basically screwed until you get something else. This makes some stages especially difficult to restart on.

Bari-Arm is a mish-mash of other pre-existing shooters, both in mechanics and style, on an underloved underdog console, but it’s still a fantastic shoot-em-up and it’s a Sega CD exclusive. They really don’t make them like this anymore, and while you’ll be equally as well catered to by any of the numerous other Mega Drive and Sega CD shooters available, this is still a great title.

The name Bari-Arm does sound a bit ridiculous. The name is a reference to Masami Ohbari, a Japanese illustrator who worked on the mecha anime Tekkaman Blade. The designs in this game are based on his style, though he wasn’t involved with the game at all, which makes co-opting his name/style rather suspect, even though this isn’t immediately obvious to non-Japanese players.

The US localization in contrast is surprisingly decent.  The cover meanwhile is excellent (better even than the Japanese), with a shiny rendition of the mecha from the Japanese original, and the back of the box has four gameplay shots plus in-game description. The writer admittedly doesn’t seem to have any idea what’s going on, but at least they tried and, you know, actually put something, which is better than the Japanese box which had absolutely nothing at all.