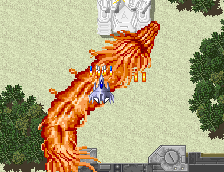 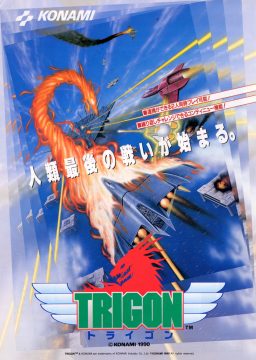 Similar to Ajax, Trigon / Lightning Fighters another largely generic overhead shooter, and one that looks and feels like a rip-off of Seibu Kaihatsu’s Raiden. 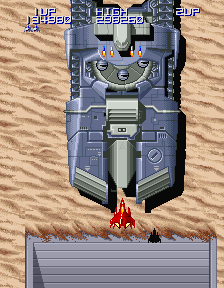 One unique feature is a two-player mode. with an extra catch. There are special power-ups that can only be obtained when playing with someone else. These weapons are positioned in between the two fighters, strung together with lasers, and fire off a variety of superpowered weapons. The problem is, both players need to survive in order to keep using it. If one of them dies, the weapon falls off and explodes.

One other slightly notable aspect is the way the levels flow straight into each other after boss fights, giving the appearance of one big, long, continuous stage. It’s a bit like Gradius, but without any intermission segments. The game also utilizes two cool bomb-type power-ups. One is a huge laser saber, the other is a flame dragon that flies around the screen, which is similar to the one from Life Force. 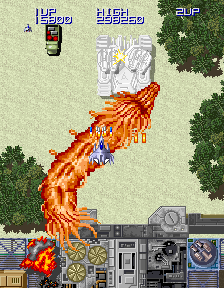 Konami felt this was cool enough that they took this ship and its powers, modified it a bit, giant-sized it, and included it in the Boss Rush stage of Gradius Gaiden. Other than this bit of trivia, it’s an enjoyable if not particularly noteworthy shooter, with some excellent music, of course. Konami never developed any console ports.

Like some other Konami shooters, there are a few differences between the Japanese game, Trigon, and the World versions, Lightning Fighters. Trigon sends you back to a checkpoint when you die, while Lightning Fighters resurrects you immediately. Trigon also has an extra weapon, similar to the two-player orbs, except it can be found in single-player. It was removed from Lightning Fighters. The digitized speech names for the special weapons are also different.