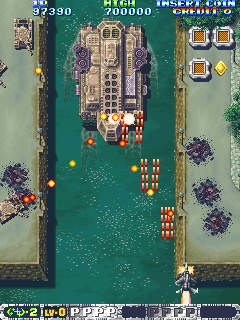 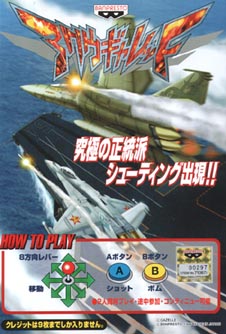 When people talk about the fall of Toaplan, four companies always come up – Cave, Raizing, Takumi, and Gazelle. Most shooter fans are aware of these guys – the folks behind Dodonpachi, Battle Garegga and Mars Matrix, respectively, but most ask, “Who the hell is Gazelle?” A very small company, they only made a few games before fading into obscurity, one of them being a shooter. That game was Air Gallet. ( “Air Gallet blows your socks off!”, the rather goofy opening voice proclaims.)

For the most part, this is a typical vertical shooter similar to the likes that Toaplan previously put out. As you plow your way through enemies and face towering bosses, your friends back at your base share sometimes comedic banter with you through digitized radio chatter. They also give you hints and commentary, and it adds a lot to a game that otherwise looks like another faceless shooter. Air Gallet needs this shot of personality, because other than a few impressive effects and sprites, it looks ugly. Buildings are muddy gray like nimbus clouds. A lot of the popcorn enemies lack detail. The effects on your fire weapon are underwhelming. Everything in general looks washed out and darkened. Sure, the bomber effects look cool, there is some nice parallax scrolling, and the final boss is a sight to behold, but for the most part, Air Gallet looks generic. 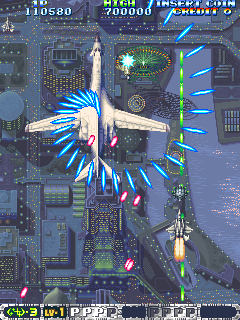 Once you put your quarter in, Air Gallet treats you to a cool cutscene where your character gets ready for his mission with the help of his crew and flies off. From there, you can power up your weapons and rack up some pretty good scores. Something both the weapon system and the scoring system have in common is cycling. When you blow up certain enemies, they will drop weapon changers. Weapon changers will cycle between four weapons – fire, laser, missile, and hunter. Fire is your standard spread gun, while Laser should feel equally familiar. Missile fires thin bullets and powerful homing missiles, while Hunter gives you an indestructible satellite, much like R-Type‘s force pod. The Hunter circles your ship and stays still when firing, allowing for aimed shots. The problem is that the Hunter is so weak that enemies that should go down in one shot take far longer to kill. It does protect you from enemies trying to dive bomb you, but it does not protect from bullets. If it did, the hunter weapon would shoot up from “useless” to “overpowered”. You can power up your weapons by collecting P-chips are found in special boxes or dropped by popcorn enemies.

Another cycling weapon is the bomber. When you pick up a bomb, all of your bombs change to the correlating bomb color. The two types of bombs are green and blue, and are very similar to the types of bombs in the Donpachi series. Green bombs hit everything on the screen and can be very useful for when trapped in some of the more difficult bullet patterns. Blue bombs shoot out a gigantic ball of energy that moves straight in front of you and explodes before disappearing. They are both very useful and whether you want one or another is entirely up to personal preference. 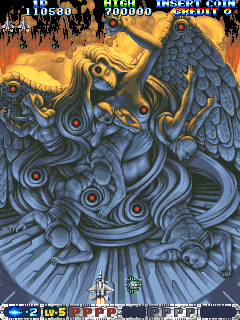 The scoring system also uses the cyclical theme. Oftentimes, fallen enemies will drop diamonds. These diamonds will slowly cycle from gold to gray and back again. The shinier the diamond is, the more points it is worth. Knowing when and where to swoop in and collect a diamond is key to scoring and can earn you some pretty nice amounts of points if you can do it right. Sadly, there is nothing like accidentally picking up a totally gray diamond and getting a measly ten points from it as opposed to two thousand from a gold one. The other way to get big points is to collect P-chips once your ship is fully upgraded.

There are six levels, and most of it is standard shooter scenery – city scapes (Tokyo, in particular), castles, and so forth. One of the most interesting is the fifth stage. It’s a really strange level that certainly showcases how Air Gallet‘s levels start to go somewhere, fly off in a different direction, and then somehow get lost. It starts out over some scenic cliffs near a forest with mountains. After that, you swoop in low over a small village and attack a huge mansion. At the very end, you fight a giant robot in the duck pond. Odd. Some of the sound effects may sound familiar to anyone that has played Toaplan’s classic Batsugun. The reason they seem so similar because they use the same driver and some of the same people worked on both of them. 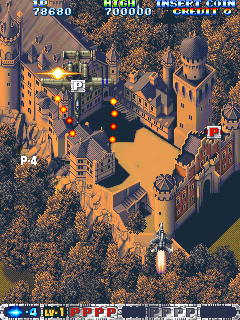 There are many restrictions in Air Gallet – you can choose which weapon you pick up, but the cycling and scrolling mean that if you cannot pick it up at the right time, you’re screwed. This is particularly bad when you have a weapon that does not work particularly good on a boss (which, most of the time, is Hunter). Furthermore, power ups never appear during boss fights. Naturally, it is very frustrating to accidentally pick up the Hunter power right before fighting the final boss.

Speaking of the final boss, it is surely one of the coolest enemies in a shooter. It’s a large statue of a demon, surrounded in flames, choking others with its long, tentacle-like hair. It has some impressive attacks and starts crying blood once you blow off enough turrets, and it’s got more than a few surprises after you think you’ve blown it up for good. The graphical design, including this stunning piece of work, is by Junya Inoue, better known as Joker Jun, the main artist behind many stylish games such as Batsugun, Guwange, ESP Ra. De., and Dodonpachi.

Air Gallet is a fairly impressive game even if some earlier Toaplan (and later Cave games) stand out a bit more. It would’ve been interesting to see what kind of games Gazelle would have made if they didn’t fade into obscurity.