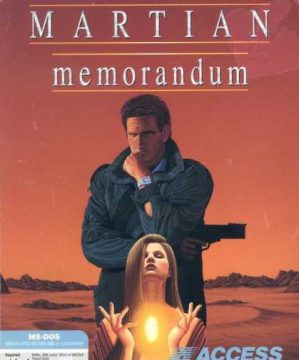 A few years after the events of Mean Streets, Tex is once again contracted to find a missing person. This time, he’s employed by Marshall Alexander, a billionaire mogul, to find his daughter Alexis. Mr. Alexander is the head of a company called Terraform, which is in the business of colonizing Mars. Tex eventually discovers that Alexis has knowledge of a mystical object called The Oracle Stone, which is somehow related to a long lost Martian civilization. Only by traveling to the red planet and investigating its seedy underground can Tex not only recover Alexis, but save Mars as well. If some of this sounds familiar, you’d be right – a lot of it seems very reminiscent of the film Total Recall, which in turn was based off a Phillip K. Dick novella called We Can Remember It for You Wholesale. 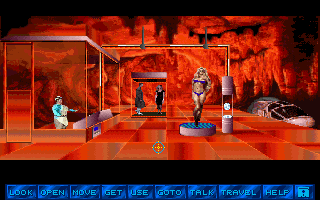 All of the flight sim and action portions from Mean Streets have thankfully been cut out, leaving the developers to focus on the core adventure aspects. It was definitely the right move, because it’s a much more focused game, but it still feels pretty amateurish when compared to LucasArts or Sierra games. The graphics, while 256 color VGA, are remarkably ugly, especially Tex’s murky digitized sprite.

The interface is now largely mouse driven but it’s remarkably clunky. Tex is hard to control, since there’s no pathfinding, and he can only walk, slowly, in straight lines. The only sounds for most of the game are Tex’s loud footsteps, since there’s no music. In order to go from room to room, you need to select the “Go To” command and then point at the exit. Thankfully, there’s a quick “Travel” button that lets you teleport to most of the major locations. There are tons of items that are maybe a pixel or two in size, making it easy to pass over them, but at least a built-in Hint function will advise you of all of the objects in the room and how to interact with them. The puzzles aren’t terribly difficult, other than a few annoying trial-and-error segments, and a maze set in a series of air ducts. 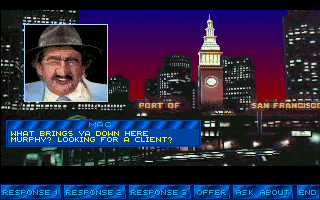 Interrogating people still plays a large role, which has been a bit streamlined. Nearly everyone you meet is hostile at first, requiring that you navigate a series of multiple choice responses to get them to cooperate. If you screw up and they kick you out, no biggie – just re-enter the area and they’ll act as if nothing happened. Most of the characters speak through digitized video and speech, using the same RealSound technology as Mean Streets. There’s quite a bit more of it here, making it notable for a disk based game from 1991. Of course, the acting and dialogue is awful, but that’s to be expected. Not all of the characters are voiced, though, and once you pass the initial series of responses, the rest of the interrogation is all text based. 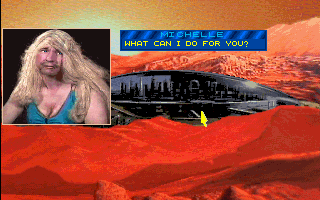 Despite all of its issues, at least Access managed to flesh out the setting. Post apocalyptic San Francisco is an interesting place to set a mystery, especially when you stick in all of the mutants. Some of them have strange growths sticking out of them, while others just look like animals. The comedy of the later games still isn’t quite apparent, apart from some of the ridiculous death scenes, which combine digitized actors with cartoon violence. Some of the characters you interrogate are pretty silly, like the blond trophy wife who’s very clearly a hairy dude in drag. The writing is overwrought, but not in a good way, and seems like it was done by a high schooler who had just read The Maltese Falcon and thought it was the most amazing thing ever. 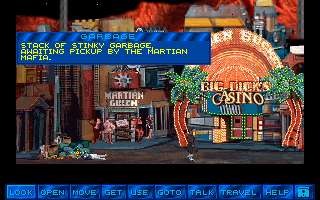 Martian Memorandum is hardly one of the stand-out games of the era, although that’s mostly attributed to the terrible interface and low production values. But its unique story makes it somewhat worthwhile if you can tolerate it, especially you’ve played Tex’s later games and want to play catchup, but don’t expect the same level of quality.