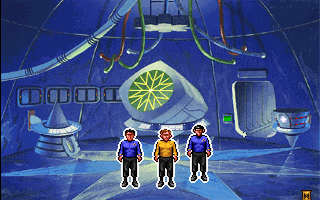 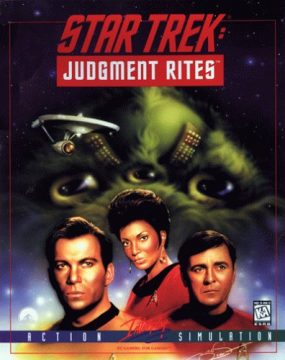 Judgment Rites is the direct sequel to 25th Anniversary. The interface is practically identical, it uses some of the same assets in regards to the Enterprise and its crewmembers, and it follows the same episodic structure. While the scenarios are, for the most part, still self-contained, there’s an overarching plot which loosely connects them together. This involves a previously-unknown race called the Brassicans, who are unsure whether to make contact with other races. There’s also a subplot about the Enterprise’s repeated attempts to enjoy a shore leave before getting sidetracked by various life-or-death missions.

In Federation, another ship, the USS Alexander, has warped in from eight days in the future, and warns of the destruction of the Federation, before itself exploding. This rather unnerving occurrence ties in with Ies Bredell, the antagonist from the final episode of 25th Anniversary. No Man’s Land finds the crew running in with Trelane (from the episode “The Squire of Gothos”), a powerful alien with an obsession with ancient Earth technology – here, he imagines himself to be a World War I German fighter pilot. In Light and Darkness, Kirk and crew discover remains of two rival life forms that had wiped out other several millennia before. Although they had been at war with each other, their dual natures fit each other like yin and yang, so Kirk must try to unite their remnant genetic material into a single race. Voids finds Mr. Spock being kidnapped by a long extinct race called the Vurians (created specifically for the game), who have been hiding in the Antares Rift, requiring Kirk to hop into an alternate dimension to find him. In Museum Piece, Kirk is invited to speak at the Smithsonian Annex but ends up defusing a terrorist plot. Though This Be Madness… and … Yet There is a Method To It act as the two-part finale, culminating in the crew answering a series of philosophical questions posed by the Brassicans. Not only does the overarching plot strengthen the storyline, but the individual episodes are also more interesting than the ones in 25th Anniversary.

Indeed, practically every element in Judgment Rites has been improved over its predecessor. There is a difficulty select for the combat segments, or they can be completely disabled. The interface is still awkward, but the puzzle solutions are more consistent, even though many of them just involve telling Spock to futz with a computer. The killable red shirts are gone, but each mission gives you different crew members to join the away team. While Spock and McCoy are still at the forefront, other members like Uhura, Sulu and Chekhov are controllable, allowing for more diverse puzzle solutions, as well as more inter-character banter. As a whole, all of these little things add up to a substantially fuller and more enjoyable experience.

While Judgment Rites was initially released on floppy disks, an expansion pack was later released to add in CG movie scenes and voiceovers for the introduction. The later CD release includes these movies, as well as full voice acting from the original cast and crew, much like 25th Anniversary. This game also sees the addition of Majel Barrett-Roddenberry as the voice of the computer. It is also officially DeForest Kelly’s last portrayal of Dr. McCoy before he passed away in 1999.

Judgment Rites was also one of the few games of the ‘90s to receive a Limited Collector’s Edition. This large box, numbered to indicate its limited quantity, included the CD-ROM version of the game, an extra CD for use in computers with various interviews, a video tape with an episode of the original series (“The City on the Edge of Forever” in the US release, while the UK version also has “Errand of Mercy”), and a small badge.