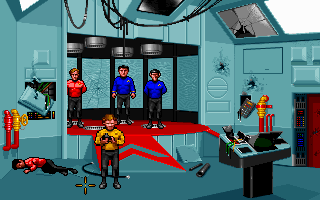 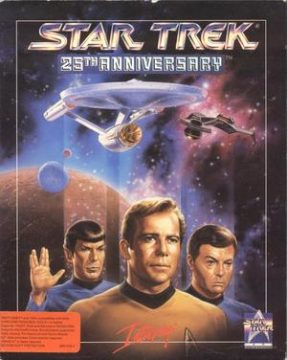 When it first premiered on American television in 1966, Star Trek was immensely ahead of its time. In following the voyages of the USS Enterprise, viewers became embroiled in the crew’s mission to visit uncharted worlds, discover new species, and maybe learn a bit about humanity’s foibles. Like most great works of art, its appeal was not immediately recognized and it was cancelled after three seasons on air.

Its cult popularity kept it alive in the minds of fans for two decades, when it finally returned in the form of numerous theatrical motion pictures. Its popularity grew even further with Star Trek: The Next Generation, a second TV series which took place in the same universe, but with a completely new cast of characters. This resurgence in popularity helped establish Star Trek as one of the great icons of modern science fiction.

With the series back in the pop culture consciousness, in 1991 the producers behind Star Trek ran a campaign to celebrate its 25th anniversary. This took the form of several video and computers games ranging across many platforms, all starring characters from the original series. These were far from the first Star Trek games to be made. One of the earliest computer mainframe strategy games used the Star Trek name, although in an unofficial capacity. (It later inspired Atari’s Star Raiders.) There were a handful of text adventures like Star Trek: The Promethean Prophecy, and other genre-bending titles like Star Trek: The Rebel Universe. But the most noteworthy took the form of an adventure game as part of the 25th anniversary celebration. Developed by Interplay, it also spawned a sequel named Judgment Rites, and eventually led to a third game featuring the cast of The Next Generation called A Final Unity. There have been numerous Star Trek games since, in genres ranging from real time strategy games to first person shooters to FMV games, but none have captured the narrative elements of the series as well as these adventure games.

Star Trek 25th Anniversary is broken up into seven episodes, each with a title and a self-contained story. They are all short and are quite faithful to the kind of plots found in the original series – defusing hostage situations with pirates, dealing with pesky Romulans, defusing other issues with the Klingons, and so forth. Amongst the more interesting ones, Demon World features a post-Ice Age planet which has seemingly been terrorized by devils. Another Fine Mess sees the return of a conman named Harry Mudd, a minor recurring character from the series. That Old Devil Moon involves preventing a missile attack from destroying a pre-warp civilization. Each mission begins at the bridge, where you can order Sulu to warp to different star systems (the game’s method of copy protection, seeing as the locations are only identified in the manual).

On each away mission, Kirk is joined by Spock, McCoy, and a generic Security Officer, known in the fandom as a “redshirt”. Much like their roles in the series, said redshirts are little more than cannon fodder to draw away danger from the more important characters. There are certain situations where, if you screw up, you’ll get your redshirt killed, but all of these are entirely preventable. A few episodes even have branching paths. At the end of each scenario, you’re graded on your performance, which is calculated by obvious things, like how well you’ve protected your fellow crew or whether you took the violent approach over the peaceful (and therefore strategic) option. You’re also awarded a higher score for thoroughly examining objects and choosing the dignified dialogue options. Although you can pass a scenario regardless of your final score, your final tally determines the ending sequence.

While the point-and-click adventure segments occupy the bulk of the game, there are also some space combat sequences. They look and feel quite similar to Origin’s Wing Commander, depicting ships as 2D bitmaps in 3D space. Compared to that game’s light fighters, the USS Enterprise is obviously much bulkier, as are most of the enemies you’ll face, so the action isn’t quite as fast. You can issue commands to your various crew members to raise shields and so forth. Although long time adventure game fans tend to grumble at the presence of action sequences, the ones in Star Trek 25th Anniversary are surprisingly well executed. They aren’t overwhelmingly difficult either, save for the final encounter, because the Enterprise can take quite a bit of damage.

The developers absolutely nailed the look and feel of the original series. While the character sprites are indistinct, the color palette is bright and optimistic. The CD-ROM release is essential, as it not only adds in sound effects taken from the show, but also features voice work by all of the original cast members. They all do a fantastic job, and round out an authentic experience.

But while it looks nice, sounds nice, and is even fairly well written, some interface issues plague its design. None of the icons are labeled, making it confusing to issue commands on the bridge unless you’ve got the manual on your lap. On the away missions, you technically control Kirk, but you’re also joined by Spock and McCoy. Sometimes you can simply “use” something and the appropriate crewmember will take action. At other times you need to specifically select one of them by clicking on him, creating some frustrating inconsistencies. The animation is glitchy and your characters are occasionally unresponsive to mouse clicks. Even the inventory and dialogue implementation is cumbersome.

The CD-ROM version also features an extended version of Vengeance, the final scenario. In the disk version, it consists of a very brief adventure sequence, followed by an extremely difficult space combat sequence where the Enterprise faces off against three ships at once. The CD release fixes this by expanding the adventure scene, as well as reducing the difficulty level of the arcade sequence.