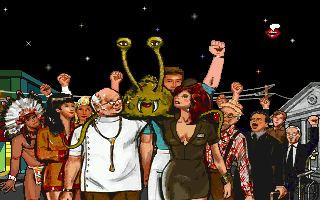 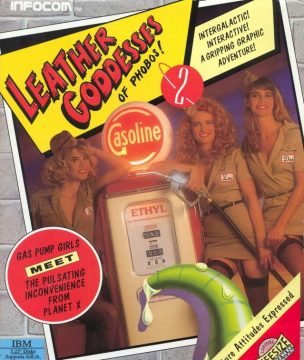 After the purchase of Infocom by Activision, text adventure development slowed to a crawl before dying completely. Legend Entertainment picked up the slack for a while, but a number of graphic adventures were still released by Activision, using the Infocom label. Most of these were Zork related, but they also managed to release a sequel to Leather Goddesses of Phobos. Relegated to obscurity, this second game, subtitled Gas Pump Girls Meet the Pulsating Inconvenience from Planet X! (complete with exclamation point) is a first person icon-based game with scanned, hand-drawn graphics, similar to Dynamix’s Rise of the Dragon. Like its text-based predecessor, it relies heavily on homages to ’50s movies, which are more fully realized here due to the sound and visuals, but it ends up faltering in a number of other unfortunate ways.

The year is 1958, and scientists have discovered a new planet on the edge of our solar system – the mysterious Planet X. Unfortunately, it’s also been subject to invasion by the ravenous Leather Goddesses, having suffered a bit of humiliation after their defeat in the last game. One of its inhabitants, a little green monstrosity with eyestalks and tentacles named Barth, flees into space, but crash lands on Earth in the sleepy town of Atom City, Nevada. Earth is next on the Leather Goddesses’ subjection list, so two earthlings must team up with the ugly little creature and save the planet once again. 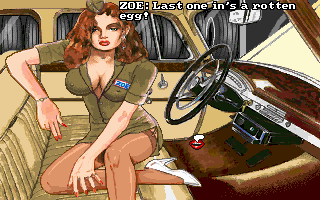 The game offers the choice of three characters: Zeke and Lydia, the two earthlings, and Barth, the alien. Zeke and Lydia function as the male/female roles like in the first game – their quests are more or less identical, with some minor differences in dialogue. Their main goal is to sneak into the local military base and find some way to steal a radioactive isotope. Then, you team up with Barth for some brief jaunts to Planet X and Phobos, whose segments are so short and easy that they feel like cutscenes. Then the game’s over. As Barth, you need to explore the town to find eight different objects – weird stuff like billiard balls and such – to fix your ship; afterward, the later portion plays out the same way as with the humans.

The whole experience gleefully rolls around in references to cheesy ’50s sci-fi, far more so than its predecessor – you can visibly see the strings on the planetary models – and the characters run the gamut of stock tropes and homages. Lydia’s little brother is an excitable nerd with freckles, taped glasses, and copious amounts of conveniently useful scientific knowledge. Her father is a renowned wheelchair-bound scientist with a number of bizarre gadgets in his basement. The town sheriff is basically Barney Fife. There are tons of more explicit references too, many involving Dr. Strangelove – the sign outside of the General’s house says “No Preverts” and one of the computer terminals speaks of “purity of essence.” But while there’s a lot of genuine enthusiasm for the subject material, it’s no replacement for quality writing, which is in curiously short supply. Simply put, the game just isn’t very funny. Sure, the name of the movie in the theater is It Came on the Desert, and the road through the town is the not-so-hilarious Route 69 – and that’s about as witty as the game gets.

Of course, it doesn’t help that the quest is bafflingly short. The town of Atom City is fairly expansive, with a number of locations – a bar, a diner, a whorehouse, a movie theater, and so forth – but there’s nothing to do in most of them except maybe grab an essential item and trade some inconsequential dialogue with the inhabitants. Most of them barely have half a dozen lines, leaving them largely as caricatures rather than characters. It’s oddly disappointing that the eponymous Gas Pump Girls have no actual bearing on the plot and only stand around to look pretty. The multiple player characters were supposed to improve replayability, but it’s still not enough, as you can play through all three paths in maybe two or three hours, tops.

Like the first game, one of the big draws is the purported “naughtiness.” As Zeke or Lydia, you can hook up with certain members of the opposite gender by talking to them once, which will then reveal a “Screw” icon. This will play a brief video of suggestive black and white stock footage – trains going into tunnels, missiles being launched, etc. – and then things continue as normal. You can do it as many times as you want, but it has no real effect in the relationship between Zeke and Lydia, who, strangely enough, cannot hook up with each other at any point. Other than some scant clothing, ample cleavages and noticeably perky nipples, there’s no real nudity either, leaving the whole feature as little more than near-meaningless sight gags that make Leisure Suit Larry seem intelligent by comparison. There are no differing maturity levels here either, although purportedly what was released was toned down a bit from its original drafts.

Beyond this silliness, LGOP2 is notable for featuring fully-voiced dialogue. This was done in the past on a few occasions through speech synthesizers, but the voices here are all digitized actors and actresses. This was before the proliferation of CD-ROM, so the game comes on seventeen disks and takes up 14 MB of hard disk space, roughly twice the amount of similar games of the time. It’s painful to listen to, given that it’s incredibly compressed, and the acting is predictably amateur. And most of the exposition is revealed through Barth, who has the most aggravating voice of all. It seems like a waste that all of these resources went into the voice acting, seemingly at the expense of the rest of the game. 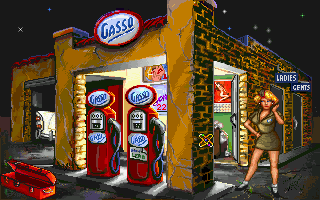 The manual makes note of evil agents that steal games and release them before they’re finished, a self effacing admission that, yeah, clearly this game is incomplete. If the game was substantially longer, or the locations and characters were more fleshed out, perhaps on the scale of the original, then this might’ve been a pretty good game, but instead it stands as evidence of a text adventure that couldn’t properly make the transition to a new age.