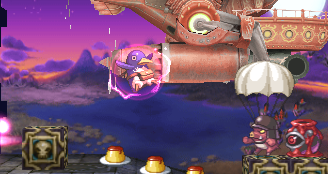 Prinny expected a lot of players, and for better or worse, they supported it. It was a resounding success both in Japan and in the US, and it didn’t take long at all for a sequel to get announced. In true NIS tradition, it didn’t just continue the first game’s legacy; it expanded on it and jacked the crazy up to 11. As with the original, there’s not much to the story. This time Etna’s had her unmentionables stolen by a rogue Moab called the Phantom Thief, and she sends the Squad to go retrieve them. If they fail in retrieving her underwear, she’ll have them all skinned for fabric to replace it.

After the dozens of hours of replay value offered by the first game, there were some lofty expectations for Prinny 2. NIS didn’t make many changes to the core formula, though. The largest complaint levied against the first game, the fixed direction of jumps, hasn’t been changed, nor has the infamously high difficulty level. In fact, Prinny 2 is actually harder than the original, in many ways. Although the bosses aren’t quite as nasty, the new stages have various new obstacles and environmental hazards to make a Prinny’s life even more difficult. Additionally, the three lives of the first game’s normal mode have been cut down by one for the sequel. Three hits and it’s over. The one-chance-only Hell’s Finest mode makes a return, and there’s also a new beginner difficulty called “Baby Mode”, which replaces scarves with diapers. Similar to Mega Man 10‘s easy mode, this also adds bridges and other elements into stages to make clearing them easier. 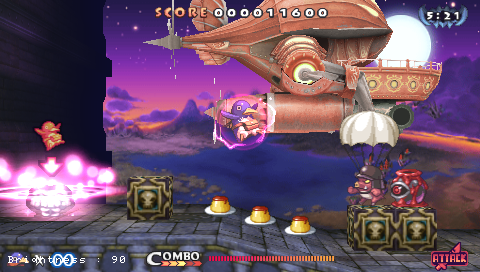 The major update to the gameplay, which can make boss fights and stages much easier, is the new Break mechanic. After inflicting enough hits on enemies and certain obstacles, Prinny goes into a berserk mode that makes all his attacks stronger. He also gains special abilities to inflict extra damage, such as an air-to-ground dash that wipes out all enemies in his path, a slashing spin-dash, and much faster projectiles during mid-air attacks. This does little to balance out having one less life than in the first game, as many lost lives will happen as a result of the sadistic level design, not from enemies and bosses. Although the final boss isn’t as strict on strategy as Prinny 1’s, it’s still a daunting task that requires quick reactions and memorization of its attack patterns.

The new underwater stage gives Prinny higher jumping speed, in a level full of electrical currents and instant death floor panels, and there’s a windy stage with misdirecting breezes similar to the second level of the classic Ninja Gaiden II. Certain stages even have massive background obstacles which arrive to launch projectiles at the stage, such as fully rendered airships which fire missiles, and Disgaea 2‘s Dark Sun, which rains down pillars of fire.

The general flow of the game is also pretty much just like the first game. There’s ten hours to complete all the stages, and the first six each have six variations of each level. There’s still a wealth of replay value as well. The hidden Lucky Dolls return in force, along with new achievement-awards that have even more sadistic requirements than Prinny 1’s. (Now presented by a hilariously ‘cosmopolitan’ Lilith reporter.) There’s also several added monster and boss varieties, most coming from the newer Disgaea titles.

Where Prinny 2 is an immense disappointment compared to the predecessor is the localization. All the NPCs and bosses are again fully voice acted, but the quality has taken a nose dive. The original voice of the Hero Prinny, a mainstay since the earliest titles, has been replaced by a far less suitable voice actor, whose dialogue sounds awkward at best.

The Hero isn’t the only one guilty of this, though. While the first game was full of enthusiastic voice acting and well-suited dialogue, nearly all the voices in Prinny 2 feel phoned in. Etna’s voice sounds so bored that it seems like a completely different actress, although NIS America have insisted it isn’t. Even Flonne’s voice, clearly provided by the original VA trying her best, sounds disinterested in the dialogue, thanks in no small part to how bland it is.

As if the subpar voice acting wasn’t bad enough, there’s almost none of Prinny 1’s clever writing to be found here. The database is clinical and straightforward, with few if any comedic references that the first game was full of. The lack of effort taken with the game’s localization detracts from a decent, if frustrating, experience. Fortunately, NIS America didn’t totally botch the job.

Asagi Mode also makes a return for Prinny 2, with wildly different results. Instead of using Hero Prinny in different stages, the newly dubbed Asagi Wars levels star Asagi herself; reduced to a Prinny form after dying at Hero Prinny’s hands in the first game. The stages are entirely the same as the main game’s, with the same variable time zones. Asagi Wars is just as large in scope as the main story.

The story to Asagi Wars is hilarious, and easily the highlight of Prinny 2. Even the localization is much better here than in the main story. Asagi’s voice actress makes a return, and Flonne replaces Etna in the base hub as her main companion. The writing of the multiple Asagi clone-bosses is well-written and acted, to the point that makes one wonder if a different localization team was responsible for Asagi Wars.

Instead of using knifes and aerial attacks, Asagi gets a huge arsenal of firearms. Asagi Mode is more like Contra than Ghouls ‘n Ghosts. However, all her ammunition is limited. The rapid-fire shotgun offers the most shots, while the high-powered rocket launcher and flame thrower get depleted rapidly, and are best saved for boss fights.

Rather than having lives, Asagi Wars relies on ratings. Killing enemies and gathering items builds up the rating percent, while getting hit and falling depletes it rapidly. Once the ratings hit 0%, it’s over. Fortunately, it’s possible to prevent death by killing enemies before the meter hits rock bottom, but bosses can do lots of damage to a full meter very fast. Asagi also has a Break Mode of her own that allows her to deal out extra damage, which also causes her incredibly catchy theme song to take the place of the stage music.

Unlocking Asagi Wars requires finding the hidden letters throughout the main game, though it’s also accessible through a code. Anyone frustrated with the sequel’s main game, which can be very taxing for even Prinny veterans, should definitely give Asagi Mode a try before giving up on it. It’s easily the highlight of an otherwise disappointing sequel.