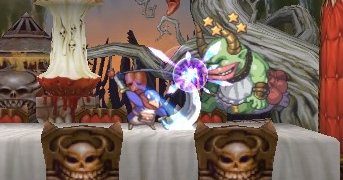 Nippon Ichi aren’t a company to do things in half-measures. Their Strategy RPGs are well known for the absurd amount of content crammed into them. So when NIS set out to do a platformer starring the Disgaea series’ ever-present Prinny mascots, the end result being among the hardest of its kind should come as little surprise.

The story premise of the Prinny titles are simple. You play one of the hundreds of Prinnies doomed to the service of Demon Lord Etna; a task that only ends when a Prinny has served long enough to earn the right to reincarnate. Considering Etna pays her staff very poorly, if at all, it’s widely known that this could take years, if not decades.

The titular hero is a chosen Prinny given the ex-Overlord Laharl’s scarf, which will protect him from exploding on impact after being thrown; as Prinnies are known to do. If he dies, Etna will just give the scarf to the next Prinny in line, until they’re all dead. On Standard difficulty, each Prinny gets three lives; denoted by scarf icons. On the optionally sadistic Hell’s Finest mode, Prinny dies in one hit.

For being essentially a simple platformer, Prinny has a lot of depth to it. The jumping mechanics, to many a reviewer’s chagrin, take their cues from the Ghosts ‘n Goblins series. Once Prinny jumps in a direction, there’s no mid-air adjustment. While the core attack consists of simply running up to an enemy and slashing it to pieces, there’s also mid-air ranged attacks (which can deal out massive damage at close range), and a hip-pound jump which is used both for stunning enemies and getting around unsafe obstacles.

The monsters and bosses all come from the Disgaea series’ immense roster of demons, each with unique attacks designed to fit into Prinny’s platformer style. The sprite animation is as charming as ever, and long-term series composer Tenpei Sato contributed some classic tunes, as well as many catchy new ones.

There’s a handful of tricks and treats available in different stages, such as vehicles (many from Makai Kingdom), items, and collectible snacks for bonus points. Each stage (of every variety) also has three hidden Lucky Dolls, which can be collected for nifty bonus features, and even bonus stages and boss fights in the highest amounts. While most of the in-game database can be filled in just by defeating enemies, to get the ‘secret’ files on the Prinny baddies, this requires either collecting the Lucky Dolls (for immune enemies, vehicles, and obstacles), or finding rare letters dropped by monsters after defeating them many, many times.

Collecting high amounts of Lucky Dolls unlock the ultimate challenges: the ridiculously difficult Martial Tower, which leads to fights with Prinny, Laharl and Baal (on a second visit), and a battle with Demon Lord Etna herself; who calls out all the stops for the toughest fight in the game.

Prinny is jam-packed with content. The main character is given ten hours to recover the ingredients for Etna’s stolen Ultra Dessert. Each stage takes up an hour of time. In addition, the first six stages can be taken on at a different time: between the first (easiest) and sixth (hardest) hour. This means there are a whopping thirty-six variations of the first six stages alone, each with a totally unique layout and boss encounter at the end. The last four stages are all unchangeable, leading up to the final boss fight. This is a strictly timed 3:00 battle, requires near perfect memorization (and a lot of button mashing) to defeat; a task that’s caused many a gamer to either break their PSPs in frustration, or give up on the game entirely.

The other infamous detail Prinny was advertised with, possibly as a warning: the player starts with 1,000 lives. While this sounds absurdly generous, it’s not. The difficulty of the later stages and bosses, along with the necessary trial and error to complete them, can deplete the stockpile of Prinnies extremely fast. There’s no recovering lost Prinnies, either. It’s 1,000 or bust. (You can always reload from a save point, if it comes to a desperate situation.)

Prinny doesn’t just reward button mashing, it practically demands it: the square button is extremely responsive to repeated use, and each and every press of it, no matter how fast, can register a massive amount of hits in a few seconds. Using close-range aerial attacks in rapid succession is a player’s best bet for eliminating bosses that would otherwise be impossible. This isn’t just helpful for defeating the likes of the final and optional bosses; it’s pretty much necessary.

If the main game proves too difficult, finding hidden letters between stages at Etna’s Castle can also unlock the secret Asagi Mode (also accessible through a code for the impatient), which provides new stages and special boss fights against the ever-present NIS heroine who’s still fighting for a starring role in her own game. 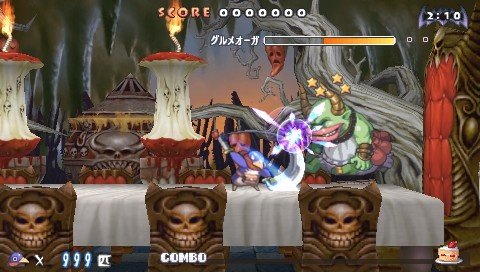 In addition to all this, the game also has a few dozen achievement-esque ‘awards’ given out for completing key tasks ranging from the mundane to the truly impressive; such as clearing the game, defeating the optional bosses, or simply performing a few hundred hip-pounds. (These are given out via news broadcast between stages by an amusingly oblivious Succubus reporter.)

For the truly devoted, Prinny even has three DLC levels which can be purchased on the PSN, each with a unique (and voice-acted!) boss fight. The Marona and Flonne levels are modestly challenging, while the ‘Lil Asagi Comes Home’ stage is only for the most masochistic of players. Fortunately, they all offer unlimited lives, and they will be necessary.

With a game this packed with content and replay value, it would have made Prinny a fantastic game in its own right. What really makes the game shine is NIS America’s finest localization work to date. Every story segment and NPC is fully voiced with some of the most hilarious voice work and writing the company has produced yet. Even the file database, providing background on the many enemies and items in Prinny, is chock full of in-jokes and amusing references.

Among the highlights of the localization is a late-game boss, a giant armor-clad boar called Darth Moab; voiced by a hilarious James Earl Jones impersonator that talks in nothing but parodies of Darth Vader lines:

“If he could be churned, he would make a powerful stir-fry.”

Each and every character from the lowly Prinnies that populate Etna’s castle to the charismatic bosses all have charmingly appropriate voice actors. Many of them are also returning vets from previous NIS titles. The English voice talent for Flonne, Etna, Laharl, and even Marona from Phantom Brave all return to reprise their characters’ voices. (The Etna VA from the first Disgaea was replaced for Disgaea 2, and she’s remained the voice actress for Etna ever since.) Asagi’s voice work is especially enjoyable, due to the many accents she puts on for her brief appearances in Asagi Mode, which is worth playing just for the comedic story sequences. NIS America went above and beyond for Prinny‘s localization, making one of the craziest platformers ever a truly special gem.