Every now and again, a video game will come along when you’re not quite sure what to make of it and how it should be classified. Is it good, bad, average, worth playing or not, and for how long if at all? There are many games for which the jury is still out on the Nintendo Entertainment System, and not often does a game completely land in the “super-awesome” category (like Mega Man II and Kirby’s Adventure) or the “complete abomination” sector (Bible Adventures and Deadly Towers). Then there are those over which opinions are incredibly divisive, which makes up an approximate 90% of the console’s library (and basically 90% of any console’s library on that note). And then aside from all of this, there’s Amagon (called Totsuzen! Machoman in Japan), a quirky little action game developed by Aicom and published by two different companies: Vic Tokai in Japan and Sammy in America. These are all relatively unknown companies who haven’t made much of an impact on the genre but not to the point of complete obscurity. However, this little… erm, “gem” of theirs isn’t really one of the more sterling titles of the NES. Amagon is about a guy who gets washed up on a tropical island and has to survive the indigenous horrors until he reaches his ship. The proper story from the manual is thus:

Amagon, the most decorated Marine, was assigned a mission by his commander to investigate a strange monster-infested South Pacific island, from which no man had ever returned alive. With a machine gun as his only weapon, he took off by plane and crash-landed on the island’s beachhead. Amagon, with his unique ability to transform into the huge Megagon, there begins his mission to become the first to conquer the island. See and experience the amazing adventures of our hero, Amagon!! His rescue ship is waiting at the other side of the island. Good luck! 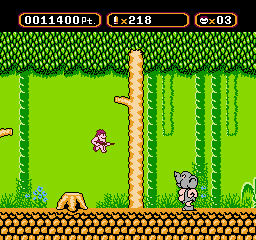 Man, good luck indeed. This story sounds like it could be the setting for some hardcore 30’s pulp novel, and you would think the graphics would be rugged and realistic. Instead, what you get is a rather cartoony game where your main protagonist, a high-ranking Marine soldier, looks like a barefoot street urchin holding a toy popgun. There are some decent enemy designs ranging from all sorts of bugs and crabs to intimidating lionmen and bipedal alligators, though other enemies look goofy (the elephants for one) yet compliment a sort of cartoony overall feel. The backgrounds are fairly straightforward, nothing too offensive on the eyes but nothing impressive either amongst all the beaches and forests you see. The graphics are overall decent, but they’re not the most visually fantastic 8-bit exhibition. The music is okay at best such as the riverside theme, and obnoxiously tinny at worst as with the midboss track. For a game first released in 1988, Amagon‘s technical prowess was only on par whereas other games were making full use of the system’s capabilities.

Of course, how a game looks and sounds is not always the greatest indicator of its actual enjoyment value. Amagon itself plays like a straightforward run-and-gun wherein you have a rifle and absolutely nothing else to help you at first. Your bullets have a good range even if they don’t fly out full-screen, and you fire as fast as you can press, but you only have three hundred bullets to start. This seems like a generous quantity, but it is feasible to run out, forcing you to use your gun as a makeshift club. Aside from the obvious “000” quantity to denote your bankruptcy of ammo, Amagon himself assumed the goofiest stance ever as he pitifully keeps his gunstock raised above his head. This attack’s range is too short and you should never have to use it, particularly due to there being an overall more effective method of attack. The main reason bullets are likely to run out is that several enemies take more than one hit before dying, with the bigger ones absorbing more than a dozen bullets on average. While this may seem unfair, there is an item to help turn the tide in your favor. 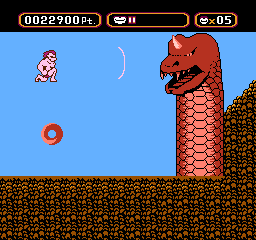 If you manage to pick up one of these weird muscleman icons known as Mega-keys, you are transformed into the awesome Megagon, Amagon‘s Cho Aniki-esque alter ego who runs about everywhere in red briefs, though the original Amagon‘s appearance isn’t much less ridiculous to be fair. Basically, you’ll want to be Megagon when you can, as he eschews the rifle for a powerful punch that does as much damage in one hit that it would normally take eight bullets to do. If you hold up and press the attack button, you fire out a long-range energy wave which does a crushing sixteen points of damage to whatever it sweeps past. The only caveat with this is that it takes up one of your precious life points, which leads to the other main reason why you must try to be Megagon as much as possible: You can actually take damage. This privilege lamentably slips past the grasp of normal Amagon, wherein one hit from any enemy force will provoke a goofy death animation and sap one of his lives. Get used to a loony-faced Amagon flying straight up into the air and plopping down again, for you will be seeing it way too much.

Amagon is hard, almost to the point where any enjoyment is overridden by the intense challenge. A good deal of it has to do with the default wimpiness of the protagonist, where Ammy can only take one hit from anything, can only shoot left and right, and has limited ammo unlike Bill and Lance from Contra. Added on top of this are insanely fast and hard-to-hit enemies who move in patterns that it’ll likely take you trial and error to anticipate. The first level alone has birds fly in with very little warning and bees which fire off projectiles while attempting to jump over fast-roving land crabs. Later stages liberally toss enemies at you that take about twelve to sixteen hits on average, forced moving platform segments as pests drop down from above, and even tough enemies in the final level that can shoot and teleport. While such evil games normally require you to keep continuing so you can learn your mistakes, Amagon gives you four lives on default and absolutely no continues. Yup, lose and it’s back to the beginning, as if this game needed to lump any more lemon salt on your wounds. It is a commendable effort to even beat the very first stage, and most are likely to give up with this initially brutal onslaught. It’s a shame this isn’t an instance where only the beginning levels are evil and the rest of the game just mellows out in difficulty. Nope, it’s like that all the damn time. This game almost makes Battletoads seem fair and civil in comparison! 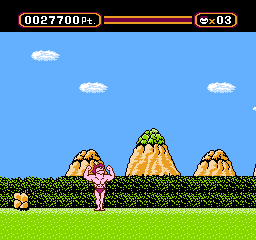 It doesn’t help that you can’t transform into Megagon without significant penalties unless you’re confident in not taking a lot of punishment. When Amagon transforms into him, he uses up 5000 points to supplement a single notch for his health. You need 70,000 points to have Megagon’s full lifebar when you transform into him, but you likely will keep transforming into him and never building up enough points to get to the maximum, only having about half health each time. Why you can’t just get full health every time you transform is unknown, but it definitely would have helped considering all the rest of the crap the game throws at you. When it comes to the bosses, ranging from a two-faced lion head, an evil tree, a towering long-necked dinosaur and so forth (all of which look pretty impressive), they’re quite easy if you’re Megagon; just bum-rush and spam-punch them until they give up, or if you have the life to spare, use the energy wave to make it even less of an effort. If you’re just Amagon when you face a boss… well, in most cases, it might just be preferable to start over. From the beginning. Because you have no continues.

So is there anything redeeming for Amagon to mention? If absolutely nothing else, the game at least runs really smoothly without any hint of slowdown, though this fast pace often works against you. This may be a rare case where slower speed incurred by sprite overload would be preferable. Still, enemies do at least drop a fair amount of items, including points which enable stronger Megagon transformations, bullets which prevent you from resorting to the terrible gun club, and an actually somewhat liberal amount of bonus lives to counteract the likelihood that you will be losing many of said lives. Still, that the game has to “fix” its difficulty by offering you a bunch of lives that you are not always guaranteed to get sheds light on just how truly skewed this game is on any semblance of balance. Some of the bosses look cool and a bit of the music is alright, but this is far from the best action game on the NES. Why play it when you can play a myriad of other games like it but better? 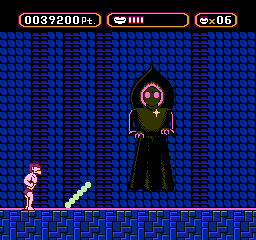 If Amagon were released a couple of years ago and its difficulty turned way down, it actually could have been a respectable title in its own right. As it stands, it’s merely one of the most incredulously baffling NES titles of all time. Nearly everything about it is middling to bad, and why it even exists on the system is anyone’s guess. Yet there’s just some quality about it, some intangible unorthodox factor that makes it worth at least a play if nothing else. It’s debatable as to whether or not it qualifies as a “kusoge,” but it’s not as flagrantly terrible as the likes of, Super Monkey Daibouken, Master Chu and the Drunkard Hu, or other legendary crap games for the NES and/or Famicom. It at least has some semblance of production values even if minor, and it at least plays fast enough so as to not be boring or tedious. Lamentably, its adrenaline levels are perhaps tilted a bit too far into the other direction, and only the most savagely determined gamers will be able to complete it. Challenge and enjoyment in games do not always interfere with each other, but in the case of Amagon, the former eclipses the latter and only a minor niche of gamers will be able to appreciate it for what it is.

On a vaguely relevant side note, Aicom and Sammy would go on in a couple of years to develop and publish Vice: Project Doom, one of the NES’s more obscure and awesome action-platformers. Some of the members of this development team also went on to create the TG16 side-scroller Legendary Axe, and the arcade game Lord of King (AKA Astyanax), both of which are pretty decent.