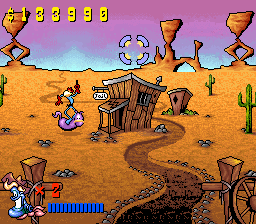 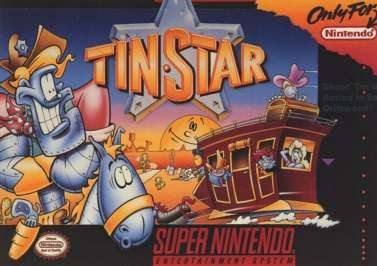 The Wild West is a woefully under-utilized setting in videogames. From Nintendo’s Sheriff to Red Dead Redemption, not a whole lot of games have explored the themes and locales of the American West. Even fewer games have innovated on the genre’s tropes. Instead, they crib from classic westerns and hodgepodge them into a potentially cohesive plot. Tin Star represents one of the few games about the Wild West that charts its own course.

Tin Star was the result of a relationship between Nintendo and John and Ste Pickford. These two developed numerous U.K. computer games in the 1980s as Binary Design and, later, Zippo Games. The Pickfords switched over to consoles when they developed Wizards and Warriors II for Rare. Once there, they produced, designed, and directed a variety of games under the name Software Creations. One of these games was Ken Griffey Jr. Presents Major League Baseball for the Super Nintendo. Despite the game’s gangbuster sales, Nintendo of America decided to give the contract for the follow-up to Rare. Nintendo of America “compensated” the Pickfords by contracting them to make a light-gun game. The Pickfords and their team at Software Creations responded by making Tin Star.

He talks like John Wayne and acts like Dudley Do-Right. The hero ah this here moving picture game is the newly-minted sheriff of East Driftwood. His hovercraft horse Aluminum is his only companion other than his trusty sidekickÂ.

Unlike Tin Star, Mo traverses the robot wasteland on his rocket rollerskates. He plays straight man and informant to the oblivious Tin Star.

The mayor of East Driftwood invites Tin Star to be sheriff of his little town. Apparently, he did so without meeting the big lug first. His honor spends much of his time telling Tin Star to do his job. Tin Star tends not to pay much attention to the mayor as he is too busy ogling…

The mayor’s daughter is the apple of Tin Star’s eye. She occasionally cheers him on, but she is hiding a rather odd secret.

This rotund roughneck is the leader of the Bad Oil Gang. He schemes to disrupt East Driftwood and get rid of Tin Star.

This eye-patched thug is Schemp’s older brother (by five minutes). Besides ragging on his brother for being mom’s favorite, he acts as a mouthpiece for the various gangs in East Driftwood.

Tin Star’s first act upon arriving in East Driftwood is to kill a geranium. This particular plant is the prize possession of Tiny Johnson. He challenges you to your first showdown.

After you dispatch Tiny, his brethren take it upon themselves to try and exact revenge. The first such brother duel with is Bugsy. This buck-toothed bamboozler will pull his gun on you before the signal to shoot appears. Fortunately, you can still shoot him all the same.

The second member of Tiny Johnson’s brood to bother Tin Star. As his name suggests, direct hits will occasionally just shoot a hole through his hat. Enough direct hits and his luck will run its course.

Tin Star’s final member of the Johnson family to face off with is barely knee high. Will the big guy plug the pint-sized punk and put his feud with the Johnsons to rest?

This green gangster is a hitman for the Bad Oil Gang. After you send him to jail. You have to keep his cronies from freeing him.

These bionic bovines have a bad habit of stampeding. Like Aluminum, they don’t have legs. Weird.

This rubber-band man tallies up your pay (i.e.- your points) at the end of a level. Those points will come in handy for saving your game and getting a particular ending.

The game chronicles the first week of Tin Star’s tenure as sheriff of East Driftwood. Each day within the game, from Monday to Sunday, is split into several sections. For each section, you control a reticle that can moved around the screen and used for shooting. Software Creations used this set-up so that the Nintendo controller, mouse, or Super Scope could be used to play. The general consensus seems to be that the mouse works best, but the controller and Super Scope are both competent choices.

The first segment of each day involves juggling a bottle in the air with your shots until it changes colors and is eventually destroyed. Additional bottles are added over the course of the game, which ups the difficulty. However, the real secret to the bottle juggling is a target high above the initial platform. Reaching this target will cause the bottle(s) to be destroyed quicker, but also earns substantially more points. Those points end up playing a big role in the overall game.

From this display of Wild West showmanship, Tin Star is tasked with taking down the two-bit toughs around town. The stages for these fights range from a stagecoach to the middle of a stampede to the center of the town. In each of these stages, you direct Tin Star’s shots while the robotic rustler stands his ground. He’ll move to the next part of the stage once you clear out an area, but he generally stands still until then. These stages are punctuated by boss fights.

Things go back to the first-person perspective for protection missions. These stages take place in bars and outside jails and banks. Tinstar has to save the bars patrons from a bunch of bullies bent on beating them to scrap. Failure to save a patron results in a loss of health. The jail and bank protection missions have more stringent penalties. A single bomb will level the property and force you to restart the level. Meanwhile, you have to be aware of the other outlaws taking aim at you. These stages tend to get very hectic very quickly.

Throughout the third-person and protection stages, metal canteens will fly across the screen. If you manage to hit all of the canteens, you will enter into a bonus stage at the end of the level. The stage is set up with a buxom bot bound to a spinning table. You are charged with shooting the stars around the table without hitting this hydraulic hostage. Any stars shot in this part will add points to the final stage tally.

Last, but not least, each day is capped with a good old-fashioned Wild West showdown. You are once again put in the first-person perspective and are set right in front of your rival. At some point, an icon that looks like the chamber of a pistol will appear in one of the four corners of the screen. You must shoot the icon and then shoot your rival before they can strike. It takes multiple hits before these rogue rustbuckets will fall for good.

Perhaps as important as the varied action in Tin Star is the look and feel of the game. Saturday morning cartoon visuals and effects emphasize the game’s unique setting. Beady-eyed portraits of the characters jaw at you during the story breaks. Defeated enemies perform wacky animations before exploding into a shower of nuts and bolts. Gunshots crack when they connect and make your hits sound meaty. Smiling suns and oddly-shaped monuments clash with the more ordinary Wild West paraphernalia in a way that feels right. Even Tin Star himself toes the line between the serious and silly in his walking and posturing. Cartoon logic and silly dialogue further supplement the vibe. The game’s story is never too serious, but it is able to make the characters endearing.

In terms of the gameplay, destructibility adds to the cartoonish fun. Parts of the scenery in nearly every stage can be destroyed or manipulated. Shoot parts of a wooden train car and the underlying frame will be exposed. Shoot the guy by the bar and he will take a drink. The various effects encourage exploration of the environment just to see what will react when you take aim at it.

Unfortunately, several factors hamper that sense of immersion. Although the game zips you from one gameplay style to another, the enemies and settings tend to repeat fairly often. This is even joked about in the game. This leaves the impression that the game was strung along to fit with the “stages as days of the week” motif. Given this repetition, it is best to play this game a “day” or two at a time. This tactic runs afoul of the game’s other issue. Points are awarded for shooting enemies along with the bonus stages and the tallies at the end of most stages. However, the game has a peculiar save system that expends points for every save. It generally does not inhibit saving. However, if you wish to get one of the three endings other than the worst one, you have to take care to save and die as little as possible. It makes the game more replayable, but the emphasis on running through the game and not saving makes the repetition more apparent.

Tin Star is a charming, oddball game. Set in a cartoony Wild West populated by robots, it goes off the beaten path in terms of setting and style. The variety of gameplay styles coupled with the overall silly tone make for entertaining play. Repetition and an awkward save system restrict some of that enjoyment though. Tin Star is a game that, like any good Wild West protagonist, plays by its own rules. If you can cope with those rules, the game will suit you just fine.

Links:
Flying Omelette This site has a number of game reviews and archived music. The latter includes two great tunes from the Tin Star soundtrack. Definitely worth a download!
Suzaku000’s YouTube Playthrough This guy did a solid run-through of Tin Star and posted it stage-by-stage onto YouTube. If you want to see more of how the game plays, you should look here.
VGMuseum’s Game Endings If you don’t want to go through the trouble of playing the game to perfection, you can scope out the various endings to the game at this site.
Zee-3 The Pickford Brothers’ current website includes their softography and all sorts of game-related information you can get a nice Tin Star font here as well.