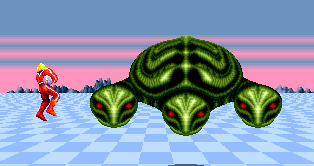 Space Harrier II was one of the first titles for both the Mega Drive and Sega Genesis when released in their respective territories. The game was planned by Kotaro Hayashida (creator of Alex Kidd) rather than Yu Suzuki.

Not much has changed from its predecessor, other than offering 13 new stages, along with a handful of new enemies. The coolest of these are a three-headed turtle, a winged tiger, and the penultimate foe, the Dark Harrier. Boss fights are heralded with a darkened playing field and some lightning cracks in the distance – one of the few new special effects. You can choose your starting level at the outset, although you still need to conquer all of the stages to beat it.

The dragon bonus stages are gone, and are instead replaced with levels where you ride on top of a jet. It’s pretty much like a regular level (except you’re invincible), which is underwhelming. The new main theme, composed by Tokuhiko Uwabo, is actually pretty catchy, even though it doesn’t quite hold a candle to the original. Some of the sound effects are also a bit odd, as if the programmers hadn’t quite mastered the Genesis’ sound chip.

Although the 16-bit hardware was able to replicate other arcade titles like Altered Beast, the lack of any scaling meant that it still wasn’t quite capable of delivering an arcade-like experience. The scrolling is definitely smoother than the 8-bit ports of the first game, and the horizon view actually changes as you move up and down, but it’s still choppy and ultimately somewhat clumsy. When it was released, this was acceptable, but with the numerous quality ports of its predecessor now available, Space Harrier II is really not up to par.

Although Space Harrier II was originally released on the Mega Drive, it was ported to numerous computer platforms in Europe. The quality of these ports is about the same as the ones developed for the original game. The Amstrad version has filled-in sprites but the speed is slower. The Atari ST and Amiga ports are very close to the Mega Drive version. The music conversions by Matt Furniss are quite excellent. 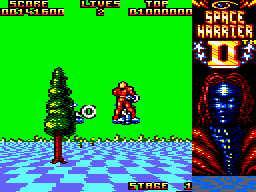