The early releases of the SNES were aimed at proving the system’s technical capabilities, particularly the liberal use of Mode 7 scaling and rotation effects. Mode 7 was seen as a technical marvel for the time it was released, particularly for games like F-Zero and Pilotwings which were specifically built around its function of background manipulation. Not too many other games used Mode 7 as liberally as those two, but one of the few less known is an obscure little futuristic shooter made by none other than HAL Laboratory, the long-standing second-party Nintendo developer best known for the legendary Kirby series and the Eggerland / Lolo puzzle series before that. This relatively unknown entry in their catalogue is HyperZone, a game which was the absolute definition of Mode 7 despite not being the program’s most heavily advertised example. 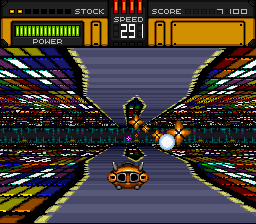 The basest possible description of HyperZone is “Space Harrier meets F-Zero.” It is a three-dimensional shoot-em-up styled very much like Space Harrier, where the camera is positioned just behind your ship as it constantly moves forward on a Z-axis while you can fly around in eight directions on the X and Y-axes. However, the overall feel of the game seems to borrow liberally from F-Zero, Nintendo’s beloved futuristic racing game which proved to be one of its most famous SNES launch titles. The 3D effects of the floor (and ceiling, which mirrors the floor) are quite similar to how F-Zero‘s terrain is modeled, and there are two gameplay elements to be discussed later that also draw inspiration from the racer. As with any game, HyperZone is based within a plot to explain why you’re doing what you’re doing, even if it’s an incredibly loose and light plot as is the standard with any shoot-em-up. In the distant future where Earth has become uninhabitable, world leaders mobilize to colonize uncharted terrain starting with the rest of the Solar System at Mars and beyond. Unfortunately, a malicious race of half-mechanical organisms coming from the asteroid belt wage war on human civilization before further progress can be made, and it’s up to you to clear out the hostiles for the greater good. Nothing inspiring, nothing original, but it is what it is for the appropriate genre. 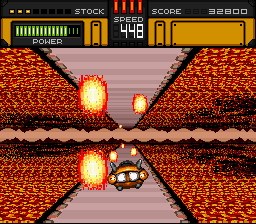 Now the most notable aspect of HyperZone is how it looks. The graphics are, by all technical definition, astounding for what the SNES could do then. Every stage is comprised of a flat terrain mirrored to serve as the floor and the ceiling as your fighter ship constantly flies toward the horizon. Enemies and obstacles grow larger as you come close to them and the vertical boundaries keep roving backward as your ship effectively stays still, moving the landscape around it. Considering this game’s release in 1991, its technical prowess was quite amazing for then. Unfortunately, the Mode 7 overload causes nearly all of the graphics outside of your player ship to appear as very blocky and/or pixelated. Some may appreciate the graphical style as a beacon of example for what the SNES could do, while others will write the game off as a tech demo for a mode which has not stood the test of time. As opposed to how it looks, how the game sounds is quite eclectic. The soundtrack is one of the game’s best assets, but this is to be expected from Jun Ishikawa, HAL’s music man and the composer of nearly all of Kirby‘s games. Every track is incredibly uptempo, fitting the fast speed of each stage and making good use of the SNES’s many sound channels. Blast Furnace and Old Capital have particularly groovy tunes made to blast by. 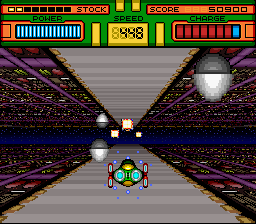 HyperZone has fascinating (if not always impressive) graphics and a cool soundtrack, but how does it fare as a game? At its absolute base, the gameplay can be summed up in the simple single sentence of “keep moving and shoot stuff.” Similar to its predecessor Space Harrier (and its successor Star Fox), HyperZone merely requires you to fly through and reach the end of a course, where a boss awaits to destroy you before you can do the same to it. Technically, you can go through entire levels without shooting anything, but considering how they serve as obstructive hazards and some fire directly at you, returning fire is ideal. As mentioned before, a couple of mechanics seem to have drawn inspiration from F-Zero; namely, the concepts of “rails” and “pit zones” now translate to boundaries and recharge zones for which you must always watch out. Each level has rails and power recharge zones to drain and maintain your ship’s energy respectively. You must do your best to stay within the boundaries of each level track, as flying over these edges drains your energy at a moderate rate. You also have to mind the rails while dealing with enemy fire, but there is a brake button to curb your speed for better control, yet braking too long will also sap your energy. Thankfully, your lifebar can be restored by flying over power zones denoted by light-blue colored strips of land, akin to the pit zones strewn about F-Zero‘s tracks. 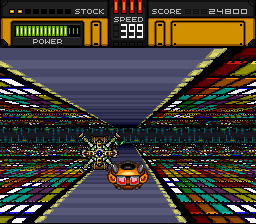 The main priority in any level is to survive to the end and obliterate the boss. Your secondary goal is to score as high as you possibly can with a twofold motivation. A: You get bonus lives for higher points, and B: Score high enough and you get to pilot a more powerful (and increasingly cooler-looking) ship for each new stage. Your starting ship is the BM-4, a weird-looking orange machine whose shots are weak but sufficient. If you get enough points to upgrade, you move on to the H-Wing (no relation to Star Wars known), and you get the ability to use charge shots. These powerful projectiles blow through any enemy they touch and can earn you mass points if you line up a good shot to hit several targets at once. Your charge shots become more powerful and charge up faster for the subsequent ships you earn, such as the P-7, the RW-91, and the X-003. Somewhat ironically, the ultimate machine is the BM-4 Reform, your old and weak BM-4 starter ship, now having been severely retooled into a silver super-death machine with the absolute quickest charge time of any other ship. It usually works out that you have to play the first two levels with the BM-4 but gain enough points to get a ship for each new level, though another duo of stages may force you to remain with the same ship. You will likely have the BM-4 Reform by the final stage, perhaps even at the seventh level if you’re good enough. 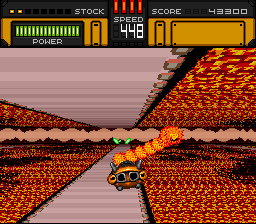 Each level has a different defining color scheme to it and specific enemies and hazards which give them all their own feel, albeit while still adhering to the game’s basic formula of moving forward and shooting. It starts out on the easy Material Factory which offers basic enemies for target practice before moving into the Blast Furnace, an area evocative of the many fire levels Konami puts into their Gradius games with fireballs and pillars of flame bursting out of the terrain. You then move on to the gloomy Old Capital, the lush Green Land, the arctic Ripple Field, the lighted Neo Megalopolis, the nightmarish Bio Plant, and the finale at the eponymous Hyper Zone. For the most part, the difficulty ratchets up for each subsequent level with more enemies, tighter pathways, and dead ends which force you to take a bit of damage in order to pass the track and move over safe air. The challenge increase is somewhat mitigated by your succession of new ships from level to level, but you have no continues and must ensure you lose as few lives as possible to reach the end. The game is short enough that having to restart isn’t too painful, and it certainly can be beaten with enough practice thanks to the semi-common distribution of bonus lives at every 30,000 points. 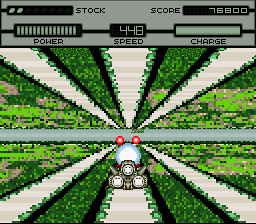 The stages themselves turn out to be greater hazards than the end-of-level guardians meant specifically to terminate you. The bosses are probably the most disappointing aspect of each stage, as most of them can be equated to the same “fly around and don’t stop for anything while shooting them” formula. They’re nothing too original outside of what has been seen in other rail shooters, such as the expected multi-segmented snake/dragon boss (of which there are two here) and large machines which are simply bigger and shoot more guns than the smaller machines you wasted on the path to the end. The most amusing boss looks an incredible amount like the four-button pad on the right side of Super Famicom controllers (which had buttons in red, blue, yellow, and green instead of the American SNES purple ones), with the four buttons flying out of their holes to shield the central pad and fire colored rings at you. While this boss is amusing, the rest are relatively unremarkable, and the final stage is a considerable anticlimax with a no-frills boss rush that rehashes all of the previous big bads, now easily destructible with the BM-4 Reform, and a not-too-bad final boss which is only marginally tougher than the others. 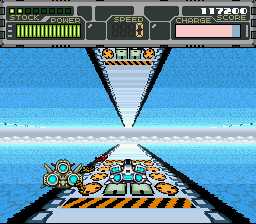 Even if the game peters out around the end and is as old-school arcade as you can get for a console title, HyperZoneis still an interesting experience that was admittedly more impressive then as opposed to now. This perhaps begs the question: Is HyperZone essentially a tech demo? It can most certainly be considered one. Does that mean it emphasizes style over substance? Arguably, yes. Does that not make it a good game? No. It may have some critics, but it is a fun and fast game at its core that, while shallow and repetitive, is very simple and easy to get into. It’s far from the best game on the SNES and might just be the sort of game that you’d be done with after a handful of lazy afternoons. Yet by that token, it is also so accessible that it lends itself to a high replay value. 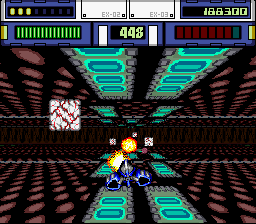 You could definitely do far worse than to play a game by HAL, especially one that has been obscured by the glaze of time and even seems to have been forgotten by its own creators. The only possible latter reference that exists of it is naming the final boss area in Kirby’s Dream Land 3 the “Hyper Zone,” a dark void filled with trippy visuals somewhat like the game to which it owes its name. It’s strange to think that this no-nonsense shooter is from the creators of the (mostly) sugary Kirby series, but it’s not unheard of companies experimenting with multiple genres and titles before finding their central moneymaker.