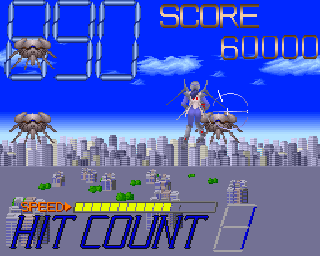 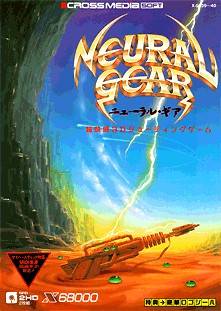 Developed by Fill in Cafe and published by Cross Media Soft, Neural Gear is a rail shooter that closely resembles Space Harrier, released exclusively for the Sharp X68000 home computer. You play as Emi T. Fonon, a futuristic soldier from the years after World War IV, who wears a super suit that can fly back in time and destroy time travelling robots. Each level goes back to an earlier date and has more numerous and powerful enemies. 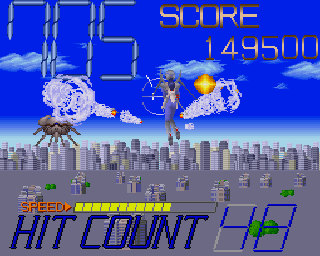 The game also has a very unique health system. There’s a timer at the top of the screen, counting down very fast. Every time you get hit, you get points deducted from your timer, so it also acts as a health bar. It adds a lot of urgency to even the easy levels. Luckily, there is a way to refill this timer. Enemies come in large groups, sometimes in formations, and shooting twenty enemies will refill your timer 200 points. There is even a useful hit counter at the bottom of the screen to help keep track of how many enemies have been destroyed. Getting to the end of a level adds a certain amount to your timer depending on the level, with the maximum being 999. This adds another layer of challenge. If you do well on one level, the next one will be easier, but if you do badly, the next one will be harder.

Neural Gear generally plays very well. The frame rate is smooth and there is no slowdown or lag. Granted, it doesn’t push nearly as many sprites as Sega’s Super Scaler arcade games, so it’s not as impressive as, say, After Burner or Galaxy Force, but it still looks decent. However, the gigantic numerical gauges are not only distracting, but act as borders to the game field, making Emi’s vertical range extremely limited. She is completely controlled with the mouse, making the control more natural than most rail shooters. Clicking fires the main weapon, small yellow balls of energy that are surprisingly powerful and able to destroy most enemies in one shot. You can hold the click button to fire a continuous stream of energy balls. Right clicking fires a sub weapon, which is chosen at the start of any level. The menu for selecting sub weapons is in Japanese, and Neural Gear has yet to be translated, but it’s not hard to figure out what they are.

Sub Weapon 1: SPC. The SPC is the only rapid-fire weapon. It shoots powerful blue energy balls. While it does not fire as fast as your regular weapon, both can be fired at the same time, making it a good idea to hold down both mouse buttons at once when using this weapon.

Sub Weapon 2: Rockets. Fires fast and powerful rockets. The rockets do more damage than the normal shots, but are only really useful for taking out bosses. They also take time to reload, so you are unable to fire them continuously.

Sub Weapon 3: Homing Missiles. Homing missiles move slow, reload slow, and do weak damage. The only good thing good about them is that they will always hit.

Sub Weapon 4: ???. The last option for sub weapons simply called “???” is actually a bomb. The bomb is easily the most powerful sub weapon in the game. It will instantly kill all enemies on screen, including bosses. While this may sound like an overpowered weapon, it also take out around 500-600 health and will likely kill you too if you are not careful.

Even though Neural Gear is quite enjoyable, it tends to drag on a bit. There are ten levels, most of them being rather lengthy. Additionally, if you die after level six, you get warped back to level six. Boss fights can be intense, but near the end they start firing attacks that hit up to five times if even one projectile hits. These are hardly fair and add a bit of frustration to the difficulty, but it’s not bad enough to ruin the game. 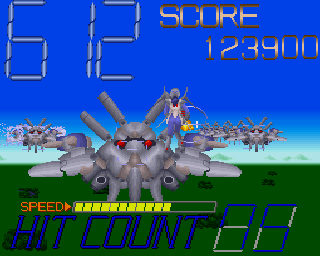 On the upside, it has a few cool special features. Besides the standard easy, medium, and hard difficulties, there is also a special one called Panic. It also has two soundtracks, one being FM Synth and the other MIDI. The FM Synth songs are louder and more chaotic, perfectly suited for the pulse pounding action. The MIDI songs are quieter and more subdued, but have a much more urgent feel to them. Both soundtracks are very good and were composed by Yonao Keishi, who also composed a lot of the music for Mad Stalker and the Asuka 120% series, also developed by Fill In Cafe. An original soundtrack was produced as well, but it was not released until 2008, 18(!) years after the game came out.

Links:
Syusabu 21st Plenty of pictures and a review in Japanese.