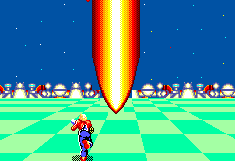 Space Harrier 3D is not merely a remake of Space Harrier with 3D effects, rather it’s a new title created to take advantage of the Master System’s 3D shutter glasses. The effect is pretty remarkable – although nothing flies out of the screen, it gives the playing field a sense of depth that is incredibly cool. The unfortunate tradeoff is that the scrolling and movement is even choppier than it was in the Master System version of the first game. Since it’s harder to judge enemy and projectile motion, it’s also far more difficult than the original, and not in a good way. 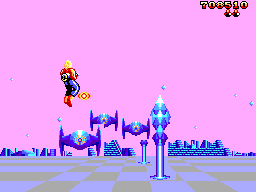 Still, it is an interesting experience, even if the fundamental gameplay hasn’t changed all that much. There’s a whole new array of monsters, including gigantic mechs and ferocious flying samurai. There are a few more obstacles to avoid, like indestructible bouncing balls and rods that seem small at a distance but grow to full length as you approach them. Some of the color schemes used in the later levels (especially the dark red and pitch black) are a far cry from the pastels of the original, leading to an atmosphere that feels more oppressive than fantastical. 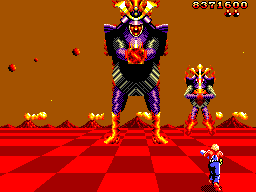 The plot is that Uriah, the good dragon from the first game, has been kidnapped, and it’s up to you to save him. This accounts for why the bonus stages are gone. The Space Harrier main theme is back, along with a handful of new songs. The Japanese version also supports FM synth. 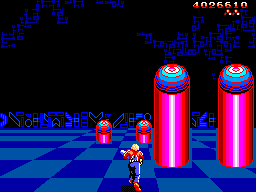 There is an option to turn off the 3D functionality, although it requires that you play the game to get a high score, then enter a code to enable the selection. Both the PlayStation 2 port and certain emulators allow you to turn off the 3D effect from the beginning, in addition to viewing the game with the traditional red-blue glasses used in other media for years. 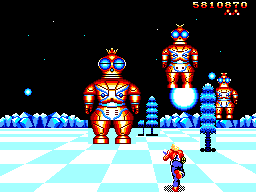 A port of Space Harrier 3D is also included in the retail version of the Sega 3D Fukkoku Archives for the 3DS. Due to the hardware, the effects from the SMS version are replicated accurately.