Maze games essentially died after the eighties, but while they were going strong, every company made at least one to replicate Pac-Man‘s success (and almost nobody succeeded). Sega would also get in on this action with the bizarre I’m Sorry and a spinoff of Fantasy Zone named Opa-Opa (or simply Fantasy Zone: The Maze), and an even earlier entry in the genre entitled Sindbad Mystery. 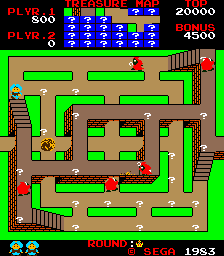 As one can easily surmise, Sindbad is an alternate spelling of Sinbad, a legendary sailor of Arabic fiction whose stories tell of his embarking upon seven fantastic voyages and has had MANY films based off of his adventures. Despite being a sailor, you don’t ever control Sinbad out on a boat. The game instead focuses on Sindbad’s acquisition of wealth by having him explore ancient ruins which bear treasure. While it looks like Pac-Man at first glance, there are a few design elements which Sindbad Mystery adds its own.

Instead of gobbling up pellets or rubies or what have you, Sindbad needs to run around the maze collecting question marks. Each mark is a piece of a treasure map which is revealed piece-by-piece at the top of the screen. When all marks are collected, the treasure chest appears in the corresponding segment of the map shown at the top. You may also notice that each maze isn’t just a flat map, and they incorporate a second level in the action with the use of stairways to create a sort of double plane effect. You can pass under elevated segments but cannot jump off of them, giving an added depth to the maze that most other games do not share, except for Alpha Denshi’s Make Trax / Crush Roller and Atari’s trimetric Crystal Castles. There are three different maps in all, where the second map allows you to pass under a completely obstructed underpass and instantly warp to the other end, and the third stage even includes a third elevation layer in the topmost right corner. 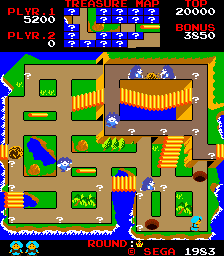 A maze game cannot be without any danger, and each level pits you against five murderous entities who attempt to stop you from claiming your booty. The first level has hooded wraiths who resemble the Raincoat Killer from Deadly Premonition (even though that game came about twenty-five years later), the second stage features blue wolfmen, and the third contains snake-frog hybrids. The artificial programming in this game is vicious and relentless, and it is quite easy to die, though there are a couple of ways you can stave off their advancement. In a move perhaps inspired by the classic pre-Pac-Man maze game Heiankyo Alien, you can actually dig holes into the ground in order to hold up pursuing enemies. However, they cannot fall into these holes nor be permanently extinguished by them; they merely exist as a barrier to get them to quit chasing you. Unfortunately, you cannot always rely on this tactic, as enemies will sometimes refill these holes themselves and continue on their merry way.

There are also a couple of large boulders strewn about each level that can squish enemies if you roll it over them, but they can also destroy these rocks if they are idle. Even if you do squish one, a new foe will spawn in their place a few seconds later. What’s worse is that once you reveal the map, a sixth enemy in the form of a creepy big skull joins in and makes it even harder to escape the bads throughout the many narrow passageways. Should you lose (and you will many times), the segment which the map would have revealed is highlighted and the treasure location appears to taunt you. If you can somehow beat all three levels, Sinbad flies off on a magical horse as you are congratulated and told to try out the next loop. You start at the first level again, but with a noticeably darker stage palette and increased aggression in the enemies. 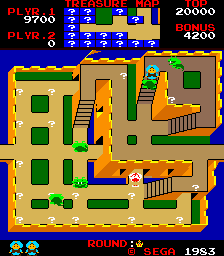 Sindbad Mystery is a very tough game, and its difficulty may keep some from fully enjoying it. Its music can also get a bit annoying after playing for a prolonged amount of time, particularly the first level theme which loops over about every five seconds. That being said, it is still a rather charming game with bright graphics and an interesting atmosphere compared to most other maze games, which were usually minimalist and cast in a black background. It’s no Pac-Man, but Sindbad Mystery is a fine maze runner for anyone looking to be challenged. Being that SM was released in 1983, it was fortunate enough to be released for the SG-1000. It’s a solid conversion that retains the gameplay while making it considerably easier, as there are only three enemies instead of five, and they are quite slow. You also only need to collect eighteen map pieces instead of twenty-four. The level structure is the same as the arcade, and the colors are even brighter and more pastel-like. The only fault is the incredibly bizarre change given to Sindbad’s sprite, where he now inexplicably has coal-black skin. Aside from that, it’s worth checking out if the arcade’s enemies frustrate you. 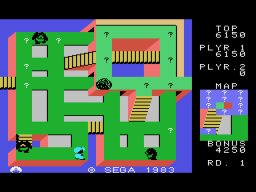 Sega didn’t completely forget Sindbad Mystery, as it was added in the Sega Ages Memorial Selction Vol. 2 collection for the Sega Saturn. It’s a largely faithful port, with only some slight recoloring of the graphics, and the status info shifted to the right side of the screen rather than the top. 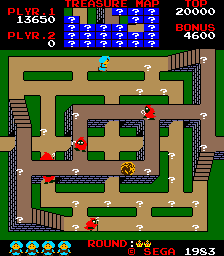 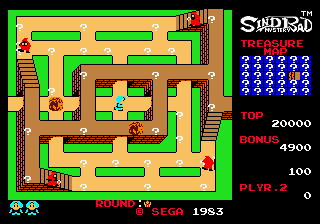 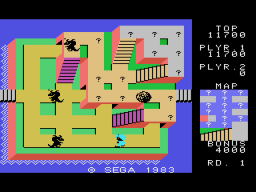