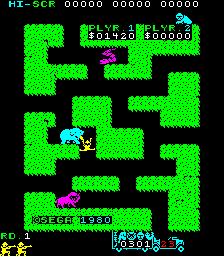 Sega’s Tranquilizer Gun (in Japan consistently misspelled with an extra “l”), developed for the Sega VIC Dual hardware, has a bit in common with Midway’s Wizard of Wor, as it focuses on shooting monsters as much as well as dodging within a maze. As a zoo officer, the goal of Tranquilizer Gun is to take up your tranquilizer gun (hey, that’s the name of the game!) and utilize it to subdue rogue animals on the loose, where you must take them back to your captive truck. You have infinite ammunition to take down the four types of wild animals: Snakes, gorillas, lions, and elephants. Snakes only take two shots to knock out and award you the least points for captivity. Gorillas and lions take even more punishment (three and four shots respectively) but reward greater scores for snagging. The trickiest creature to capture is the elephant, which takes about five shots and somehow moves fast for its size. All animals have the ability to move in and out of the shrubbery which makes up the maze; you have to really watch yourself at all times in case any hostile animal just suddenly shunks out of a nearby wall and gets the jump on you.

When you tranquilize an animal, their prone body lies still for thirty seconds, with an overhead timer indicating their remaining unconsciousness. Simply walk over them while they’re out and drag them back to the truck that you rode in on. You move and fire slower when you have one of them in tow, so it’s best to plan a quick route back to the truck. A counter appears on the truck with each corresponding animal to indicate how many you have picked up, starting at thirty seconds. If you let an unconscious animal go for too long, they’ll wake up enraged, but thirty seconds is generous enough. What you really have to watch out for is if any creature walks outside of the maze and lurchers towards your truck. They may attack the truck and rob you of all your hard-earned captives. To potentially avoid this catastrophe, you can actually move the animal truck around the edge and park at one of the maze’s other outside openings. Keep avoiding and capturing the animals until you have enough to move on to the next round, and make sure you do so in the red fuel time limit indicated on the truck. Otherwise, the animals go crazy and make it nearly impossible for you to survive.

Tranquilizer Gun is alike most of the other maze titles from its time, albeit with a unique premise and mechanic that gives it a different feel. Whereas most games at the beginning of the eighties were about violence and blasting stuff, it takes a pacifistic approach to its gameplay and offered up something alternatively entertaining.

The game was ported to the SG-1000 courtesy of Compile, where it was renamed Safari Hunting. Unfortunately, it’s a terrible port. The playing field is smaller, and the controls are worse than the arcade game, with some tiny areas that can trip up your character, making it difficult to move. Getting your hunter to pick up a fallen animal is also strangely touchy. Additionally, the enemies spend far too much time hiding in the bushes, leaving lots of times where there’s nothing to do but sit around. It’s really just not fun at all.

Tranquilizer Gun was included as an unlockable secret on the Dreamcast release of Dynamite Cop, the sequel to the beat-em-up Dynamite Deka (better known outside of Japan as Die Hard Arcade). It seemed to be continuing a trend, since the home version of Die Hard Arcade included a port of another ancient Sega game, Deep Scan. If you complete all of Dynamite Cop‘s special missions, you get to play Tranquilizer Gun for as many times as you wish. Plus, its animations are a bit smoother than the original.

Tranquilizer Gun was also featured on the Sega Memorial Collection, Vol. 23 of the Sega Ages 2500 collection for the PlayStation 2, released in 2005. Included are both the original arcade version and a completely new remake. The original version is faithful to nearly a tee, outside of the slightly blurry graphics. The remake expands on the gameplay, repaints everything in bright high resolution 2D graphics and adds some music and sound effects. There are now individual levels with slightly different layouts. The stages themselves are larger and are a few screens in size, but a helpful color coded radar indicates where all of the animals are located. The goal is to collect a certain number of specific animals within the time limit, then drive to the exit. There are a few types of tranq guns, each with different strengths, firing and reloading speeds. Driving takes a slightly larger part of the gameplay, since roads where the jeep can be driven occasionally enter the main playing field, instead of just running around the perimeter like the original game. You can also hit animals with your vehicle, which sends them comically flying off the screen, whereas in the arcade game this would get you killed. The fuel meter is now counted separately from the time limit, and is only drained when driving around, so you can only circle the level a few times before getting stranded and losing. In addition to the same four animals as the arcade game, there are also extra animals like bees and bats. These are harmless, but can be shot for extra points.

Conceptually, it’s a pretty great remake, because it expands on the original while still keeping the core gameplay relatively faithful. But there is one major annoyance – you can’t just shoot your gun, you need to take out by hitting the Circle button, then keeping hitting Circle to shoot. Before you can move again, you need to hit the X button to lower your weapon. It often means that you end up not shooting something before it hits you, and running away from enemies is made much more difficult. It doesn’t render the game unplayable, but it is really annoying. 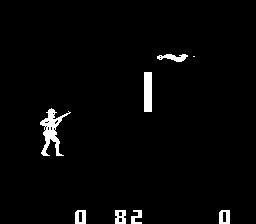 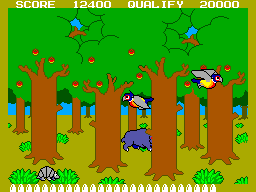 The game’s concept was probably inspired by the 1977 arcade game Safari. This is a simplistic shooter with black and white graphics, where you control a hunter and must shoot down as many animals as possible within a time limit. Additionally, many Sega Master System games often took their themes from earlier arcade games. It’s possible that Safari Hunt, the light gun game, was inspired by these titles. 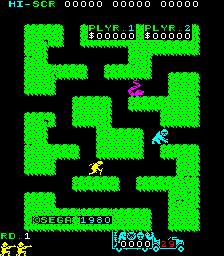 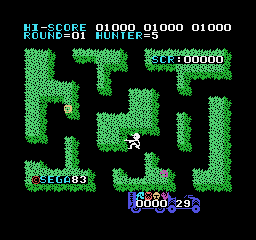 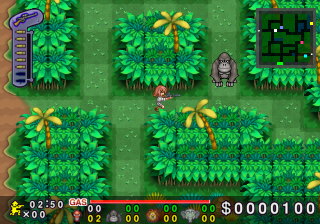