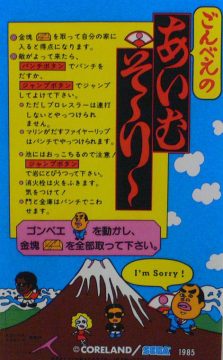 Video games don’t often tackle satirical matters, but back in the mid-eighties when games were in a bizarre state of transition after the Great Crash of ’83, two companies teamed up and dared to crank the satire dial up past 15 and produce one of the most wonderfully wacky games of all time. By Banpresto (then known as Coreland) and Sega’s powers combined, I’m Sorry somehow came into existence. I’m Sorry (a pun on the Japanese word for Prime Minister, “Sori”) is a flagrant riff against former Japanese Prime Minster Kakuei Tanaka, one of the country’s most controversial political figures from the twentieth century. After stepping down as PM, he reigned as the chief member of the in-power Liberal Democratic Party, but by this game’s release date in 1985, Tanaka’s power had been deprived by a pile of scandals including bribe acceptance, favoritism via a romantic affair, and continued alcoholism. His political influence was all but dead by 1985, and Sega saw it fit to publish a satirical game in the wake of his downfall. But instead of just making up a straightforward political spoof, they decided to absolutely inundate the game with complete ridiculousness to the nth degree. 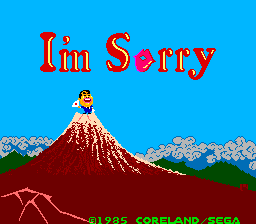 At its base, I’m Sorry is a Pac-Man style action maze game where you run around collecting items without getting stopped by any of the enemies. Not content to lampoon Tanaka, most of the enemies are caricatures of other celebrities prominent at the time, including Japanese comedian Tamori (the FBI-looking guy in shades), wrestler Giant Baba, Michael Jackson in his Thriller outfit, Olympic athlete Carl Lewis, and pop queen Madonna of all things. The most dangerous obstacle is this mind-of-its-own barrel which follows you around everywhere and can’t be destroyed, only jumped over. Why a barrel? While hearsay, its presence may be a riff on how Tanaka often rewarded members of his Etsuzankai political group with pork barrel projects in exchange for spreading petitions to gain support from rural areas of Niigata’s countryside. 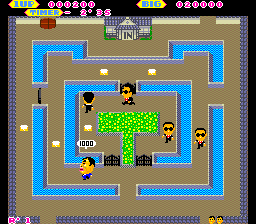 But enough with the geopolitics lesson, let’s get down to what happens when you lose a life. If you get caught by Tamori, you are inexplicably stripped down to a diaper as Tamori dons a leather S&M bikini and whips you. A-yup. Being stopped by other characters produces less amusing but nonetheless screwy results; Michael Jackson turns into a vampire and leeches your life, Giant Baba repeatedly performs backbreakers, Carl Lewis kicks you in the face, and Madonna sits on you while blowing a kiss. That dang barrel merely knocks you over and causes your face to turn beet red, and you get crisped to blackness by fire. Yep, fire from fire hydrants. While compared to later fubar games like Trio the Punch and LSD, this craziness might seem like relatively small potatoes, but it was likely considered weirder than weird back in the day. 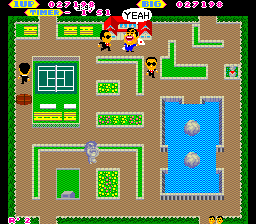 In spite of all the goofiness, I’m Sorry is actually a competent Pac-Man clone, albeit a pretty tough one. It features four different maps which loop over with increasingly difficult enemies and hazards with which to deal. Your main goal in each level is to scoop up all of the gold bars which are symbolic of Tanaka’s greed (likely in response to illegally obtaining $1.8 million in the Lockheed bribery scandals). There are eight to grab in any given level, and the more you scoop up, the higher the point total (as indicated by a bubble above Tanaka’s head) you’ll earn when you check into the building at the top. You can drop the pieces off individually or in smaller groups for less points, but since the gold bars reset if you lose a life, it’s just better to lump them up in one run and get the full 9999 points. While you’ll mostly be running around the screen, you can also jump over obstacles and enemies, and unlike most other maze game characters where evasion is the standard option, Tanaka can actually assault enemies with punches. Perhaps diplomatic immunity allows him to do whatever he wants, but the Prime Minster has a meaty fist which knocks most enemies off the screen in one hit and can bust through iron. Enemies will eventually respawn after a few seconds, so you must still do whatever you need to quickly. 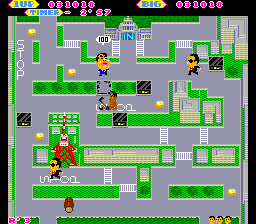 The first stage contains many gates that you must bust down with your mighty fist in order to snag all the gold. With nothing to destroy second level, you switch to using a fan instead to ward off enemies, but you have to deal with the additional hazards of aforementioned fire hydrants which literally shoot fire and pools of water over which you must jump in order to collect some of the gold. You’ll even run afoul of evil Tanaka statues which come to life if you pass in front of them. The third level resumes breaking stuff down by punching, and you must now destroy safes containing gold while watching for oncoming enemies in the process of “safecracking.” The fourth and last stage is much like the second stage but arranged in a less than favorable fashion, making it too easy to be mobbed by enemies on the bottom of the screen. Later rounds repeat these four stages but introduce tougher enemies and more complex features, like conveyor belts and rocks that shrink in the water. Early levels start off with the basic enemy of Tamori, but when Giant Baba appears, he takes multiple hits to blow off of the screen. Michael Jackson isn’t much different from Tamori, but Carl Lewis jumps around everywhere and is tough to hit, and Madonna can blow a flaming kiss across the screen to toast you. Unfortunately, that stupid barrel follows you from the very first level, and late stages even give you two to try and avoid. The enemies pursue you relentlessly and are decent at tracking you across the map, so use of the vertical passages at the corners of each stage is almost necessary for survival. 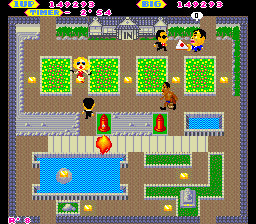 I’m Sorry can be a difficult game, and its satirical qualities are likely lost on non-Japanese audiences. How it got an overseas release is an incredible mystery, but even if you’re not familiar with the exploits of Kakuei Tanaka, the super-deformed characters are silly enough without having any idea what the heck’s happening. The graphics are bright and vibrant, typical of Sega’s many pastel-colored mid-eighties arcade games, and considering the game’s overall silly nature, the visuals still appear fitting today even if not particularly advanced. The music plays different tunes for odd and even-numbered stages with fairly catchy Japanesque tunes, even if the high decibels the music reaches can be grating after a while. If not for its madcap design, I’m Sorry at least deserves a play on the basis of being one of Sega’s most obscure games. It also is the sort of game that you’d likely never see today, what with international tensions at an all-time high and controversies likely to break out if any political figure is railed as badly as Tanaka was. Just bear in mind that back before Sonic and even Alex Kidd, Sega was about greedy Prime Ministers snatching gold and punching people. 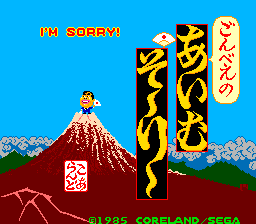