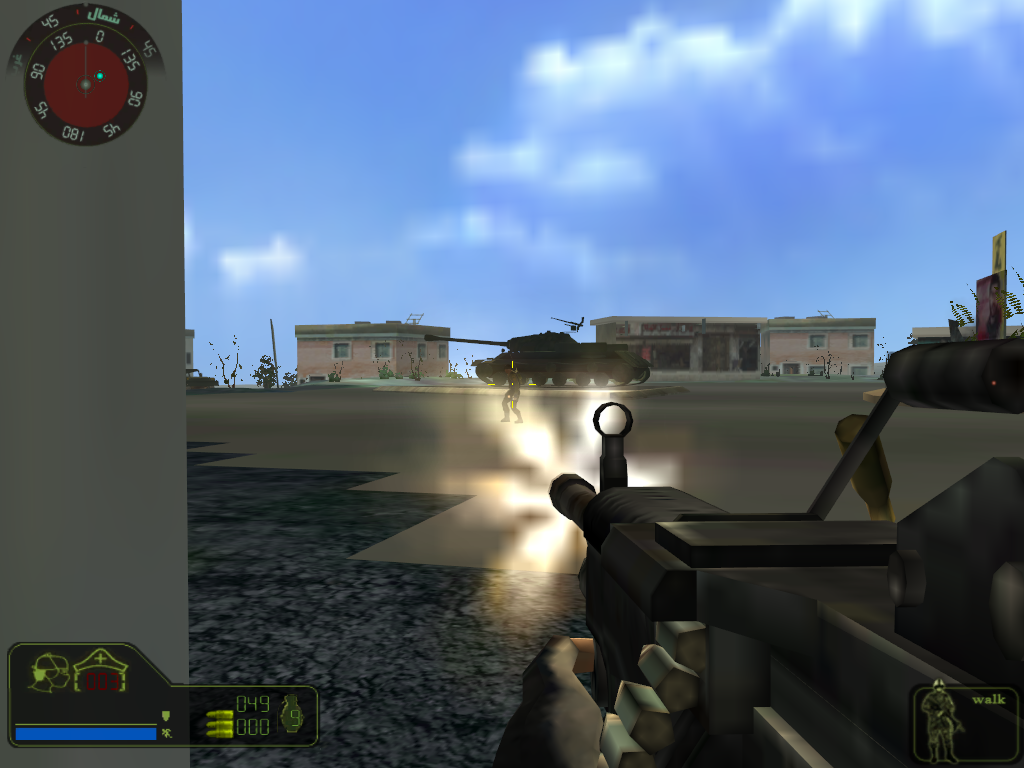 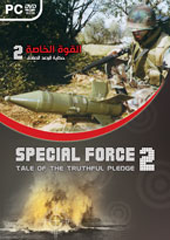 We rarely hear about games that were developed outside of the major games-producing regions of Japan, North America and Europe. South Korea and Russia sometimes makes their way into discussions as well, even though it remains uncommon. But we really don’t know anything about the rest of the world. Most of the countries that get skimmed over are because the political context that characterizes them doesn’t really allow for a local video game market to develop, and local studios have a hard time finding a decent budget. Special Force 2: Tale of the Truthful Pledge, however, which was released for the PC in 2007 and (unofficially) translated into English a bit later, did achieve limited fame in Lebanon, its own country. But in Lebanon decided he would take the opportunity to develop a video game? Even more astonishingly, two video games, seeing it’s actually a sequel? Well… the Hezbollah.

The Hezbollah (“Party of God”) is a Shi’a Islamist political party created in 1982 in Lebanon in response to the Israeli invasion that launched in the country while it was already plunged in civil war. Its main objective is the destruction of the “Zionist entity”, that is the state of Israel. Apart from their anti-Zionism, the movement’s leaders find inspiration in the theocratic teachings of Ayatollah Khomeini (“guide” of the Iranian Islamic Revolution) and still consider Sharia (“Islamic Law”) as the legislation best fit for the Muslim population. While the party’s executives maintain a somewhat moderate discourse in public, stressing their respect for democracy and gender issues, some of their claims pertains to religious fanaticism (jihad as “sacred duty”) or thinly-veiled antisemitism (NGO Human Rights Watch as “riddled with Jews”). 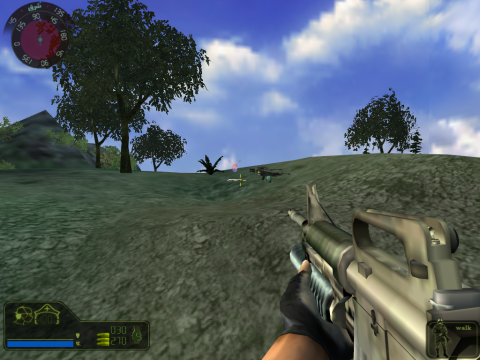 The party, who entered parliament in 2011, is very powerful. It’s financially and politically supported by Iran and Syria, as well as by private donors. This allows them to broadcast their very own TV channel (al-Manar), to manage large infrastructures to the point of being the country’s first employer, and to gain popular support by participating in the building of schools and hospitals. But, above all, to maintain a paramilitary wing, the al-Muqawama al-Islamiyya (“Islamic Resistance”). This private army has so many adherents, it’s on par with, if not larger than, the country’s national army. It’s not a very “clean” one though. They performed suicide bombings and used human shields in past operations, not mentioning the fact that some of their militants themselves acknowledge they often fire blindly at Israelis without much distinction between military and civilian targets. The Hezbollah leaders’ condemnation of groups that openly use wide-scale terrorism such as al-Qaeda nonetheless makes their position on the subject rather ambiguous, and whether or not the Lebanese party-militia is to be considered a “terrorist” group isn’t unanimous amongst the international community.

Let’s get back to the game in itself. Unsurprisingly, Special Force 2 is a rather generic first/third-person shooter. It uses CryENGINE (without license of course) for its graphics, but they look terribly outdated. The game opens on a series of video clips set to music celebrating the Hezbollah’s military exploits. The menus have the merit to be clear and complete as you can map commands, change resolution or set the difficulty mode. At least the absolute minimum functionality is there. An on-line multiplayer mode is even available but it’s pretty obvious no players are to be found. What will attract our full attention is thus the solo campaign. 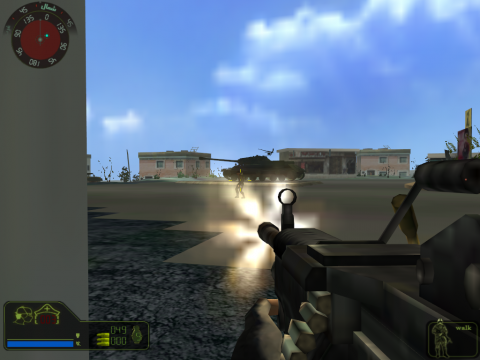 The game isn’t long at all. There are only 4 missions, and there’s no need to make actual progression as they are all unlocked from the start. These missions, which are all based on events of the 2006 War of July (that saw the Tsahal and different Lebanese factions including the Hezbollah clash again), open and close with small cutscenes that quickly introduce the region in which the action takes place and feature speeches given by Hassan Nassrallah, current Hezbollah leader. They are divided into a linear set of related objectives you have to complete – cleaning the place of “Zionist” soldiers, getting your hands on Israeli confidential documents, destroying the enemy’s radio transceiver system, and the like. So what’s required of you is at least comprehensible but rather humdrum, and it’s pretty hard to get lost in the maps as they aren’t very big nor all that freely explorable either.

You wield a rather generic (yet sufficient) arsenal comprising of a knife, a handgun, an assault rifle, a bazooka, a sniper rifle and a bunch of different grenades. You also get the opportunity to ride a jeep, which comes in handy seeing how slow your sprint is and how quick your stamina bar decreases. Watch out for your life, though – don’t expect the game to let you get your breath back when you’re shot like in modern FPS, where you only get an old-fashioned 100HP health meter that goes down the drain in the blink of an eye. Enemy soldiers are often hard to visually locate on top of that, in part due to very annoying clipping issues that make most gunshots look like they come from nowhere. It’s not like the AI is smart, however – if the opposing soldiers start emptying their rifle magazines once they catch a glimpse of your presence, they just can’t do anything but stand still if you snipe them form afar. You’re definitely going to get killed often though, even in Easy mode, but thankfully the game does feature checkpoints.

There isn’t much more to say about Special Force 2. This game is special because of its container and not of its content, as it’s a random FPS just like the ones you can find in bargain media shops all over the place. What has to be conceded, however, is the fact that the production values are more decent than one could expect when considering this game comes from guys more used to Scud missiles than to level design. The game remains unconvincing in substance, but it’s actually playable. There are very few serious glitches and no freezes, so they did care about the game’s overall quality as a product. For short, in regards to game design, Special Force 2 is just like one of those mass produced below-average games, nothing more. 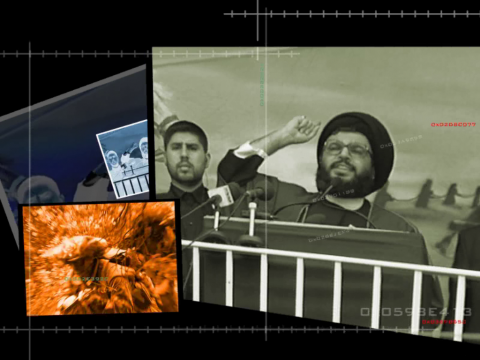 What’s obviously interesting about a game like this is its presentation and its underlying political agenda. Indeed, laying one’s hands on a Lebanese game is significantly less common than playing Medal of Honor. So, what makes this “anti-Zionist” FPS different from its Western multi-billion-dollars blockbusters counterparts? Well, that may be strange to say, but…nothing much really. Of course, the political-military point of view is switched. However, in both case, the game portrays the protagonist and its army as “liberators” in a heroic and theatric mise-en-scène in the aim to create a purely emotional and glorying narrative, devoid of any nuance and counter-criticism. Western FPS are often criticized for their lack of critical views on war and their Hollywoodian apology of military violence, yet, in Special Force 2, an objective during the last mission requires you to fire missiles at Israel, and prayer music plays in the background while you launch the ballistic weapons. How is that really that much different from firing missiles somewhere else with an equally unsatisfying orchestral piece as an accompaniment?

What makes the Hezbollah’s game and some Call of Duty-styled stuff different from each other is the motivation behind the imagery. While the former obviously wishes to use political propaganda in order to gather support or even enlistment for their party-militia, the latter is content with recycling a consensual vision of war in order to produce a mass-marketable game. This distinction doesn’t exist with a game like the infamous recruitment tool America’s Army however, which is of the same propaganda-minded nature as Special Force 2. That’s what makes this kind of games more hurtful – they actively seek to rally the public to their own cause, rather than “just” exploit a profitable facet of public opinion. What’s terrible about all of this is the fact that, whatever “side” is considered, the player is considered as a subject to appropriate (whether ideologically or commercially) influence rather than an individual to with the means to make his own opinion about the topic, even if the game itself has critical inclinations towards certain aspects.

Producing such an FPS wouldn’t be an easy task though, seeing the political implications of such a project, especially if it was related to current-day issues like the Israelo-Palestinian conflict. One can already hear the cry of the political finger-pointers; actually, it’s exactly what happened with BioShock Infinite, with radical rightists calling the game “pro-Immigrants” and “anti-White” for touching upon the history of xenophobia and racism in the United States. And coping with the controversies that may be stirred can sometimes be a tiring task. It can also be a very interesting and revealing situation though, like “a bit of a Rorschach” to quote Ken Levine. Yet, the existence of such games is not impossible, just like the BioShock series itself proven. There are no reason for similar games not to appear in the future!

Let’s end this review with an amusingly thought-provoking analysis of the game’s ending. Similar to the intro but way longer (more than five minutes!), it proudly compiles videos and photographs of human and material damage inflicted upon Israel by the Hezbollah. Still set to music, of course. And the Hezbollah’s songs only makes it even more mind-boggling, as it sounds like a mix between a cheesy track from an old karaoke tape, a MIDI rendition of Soviet military march and a stock boss battle BGM from RPG Maker 2003 overlaid with male Arabic chants. So, you basically enjoy a slideshow of raging urban fires, bombed apartment buildings and harmed civilians laying in stretchers, celebrated by weapon-firing and flag-waving. And if you actually play the game, your reaction will probably be something along the lines of, “Holy shit, as a player, did I just do that?” because, yeah, you did do that during the game. Basically, the fact that the missiles you launched ended up killing innocent peoples gets shoved into your face, and it sort of addresses your responsibility as an actor in the attack. Maybe the Hezbollah actually paved the way for the kind of games mentioned above, just not on purpose and certainly not for their profit.

That’s it for the Special Force 2 review, or “Islamist first-person shooters and meta-gaming” article if you want to give it a fancy name. Fun fact: Not transferring at least $10 to the local Mosque or the Hezbollah after having downloaded the game is considered haram (“illicit”) according to the Sharia-observing uploader of the English-patched version we reviewed. You’ve been warned, you filthy imperialist!

By the way, we’re sorry we couldn’t review the fist episode. It is virtually impossible to find on the Internet and can only be purchased in the Arab world by phone call; not to mention the fact we wouldn’t have been very keen on financing the Hezbollah even if it was internationally available, anyway.