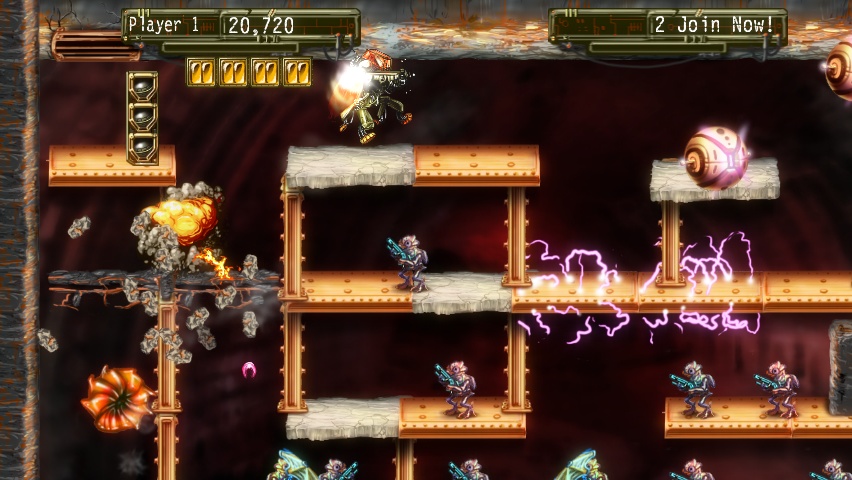 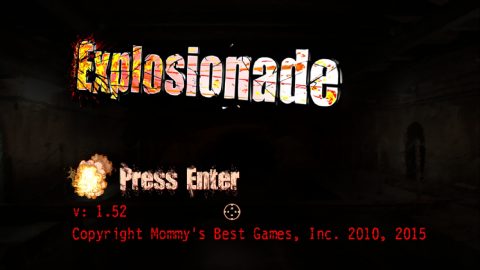 Explosionade controls vaguely similarly to Mommy’s Best Games’ earlier Weapon of Choice, in that you control your character and their aiming separately. Instead of playing as a group of commandoes though, you control a mech exploring underground caverns. You’re equipped with both a machine gun and sticky grenades, as well as a shield that lets you bounce around, providing you activate it at the right time and take advantage of the game’s physics engine. Owing to the heavier player character, the game controls a little bit differently than Weapon of Choice, with a feel closer to Cybernator.

As the title implies there are a reasonable amount of explosions, but compared to Weapon of Choice it doesn’t feel nearly as fleshed out. (It was developed in just over a month, which accounts for it.) They are many stages and they’re all a single screen in size, with the main goal to collect gold, destroy stuff and get to the exit. Since you have a fairly large life meter and can continue at the beginning of the stage, it never feels like you’re in much peril, so it also loses that same old school sense of danger (unless you want to try to play through the whole game without dying – it’s not a particularly long game). It’s still a whole lot of fun though, especially when you jack the speed up to 200%, bounce around using the shield, and just wreck things up. Plus the silly interactions between doofus hero Atticus and his commanding officer are amusing. The PC version adds several more enemies too, which gives it more variety than the XBLIG release.