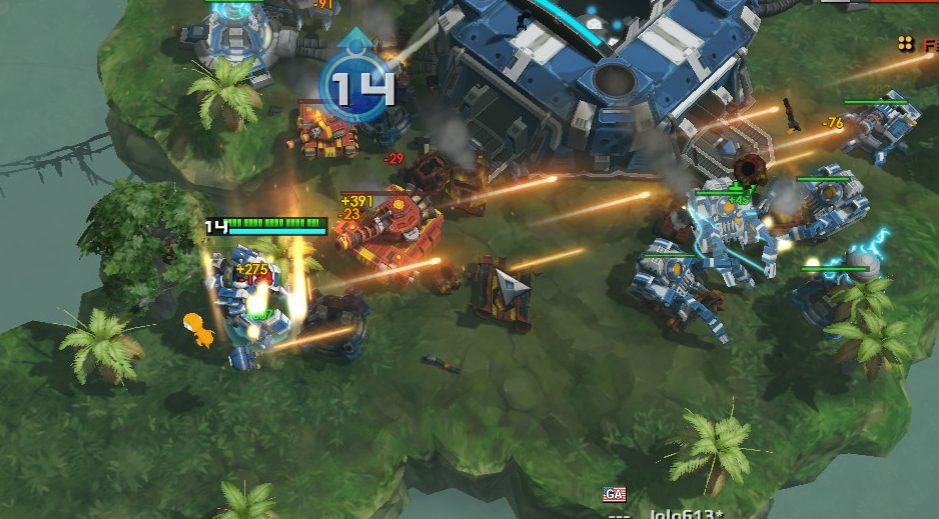 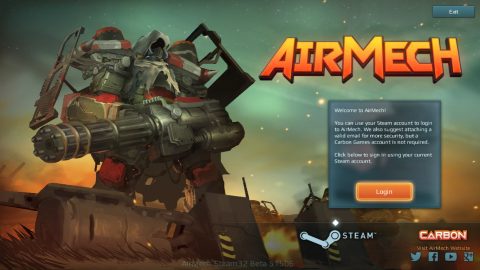 Developed by the Bellevue, Washington State-based team at Carbon Games, AirMech Is essentially a full-blown modern reimagining of Technosoft’s pioneering RTS Herzog Zwei, a game which its lead developers James Green and Ken Klopp are unashamedly huge fans of. Having previously worked together on games such as Fat Princess, Tom Clancy’s Splinter Cell and the Unreal Tournament franchise, Green and Klopp wanted to use their combined experience in developing both frantic, fast-paced games and slower, brainier simulations in a re-imagining of Action-RTS gameplay, taking direct inspiration from the likes of Starcraft, Command & Conquer, Defense of the Ancients and League of Legends in order to give their project both a fresh and deliciously nostalgic feel. The result is AirMech, a game which grabs the best aspects of free-to-play games, Herzog Zwei, other old-school RTSes and MOBAs and puts them all in a blender with blades made of pure awesome. 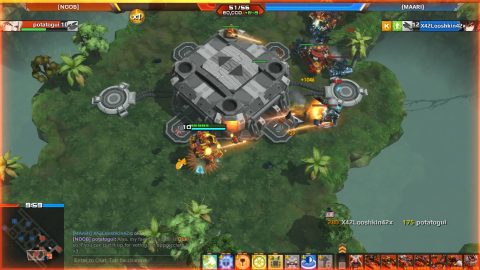 While a standard match’s objective is the same as it was in Herzog Zwei – destroy the opposing player/team’s motherbase by capturing Energy Stations spread across the map and producing all sorts of units to help you deal with enemy troops and mechs – AirMech differentiates itself from its predecessor in several ways, the most remarkable being the incredible degree of mech and unit customization the game offers to its players. To start off, players are given a whopping nine different AirMech classes to choose from, with each one of them being designed specifically with a certain playstyle in mind: Strikers are the standard jack-of-all trades, Neos are stealthy fragile speedsters good for raiding undefended enemy bases, Warthogs are slow-but-strong brutes which can attack both air and ground units in either one of its forms, Angels are long-range snipers, and so on. Each class also has multiple visual variants and special equipment which can be bought or earned separately, further increasing the number of builds available to players the more they play and/or spend money in the game. 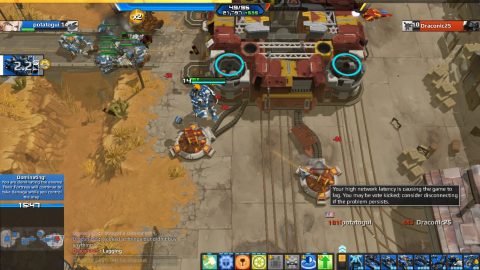 Army customization is another big aspect of the game, with players being able to bring up to eight different unit types to the battlefield. Since basic foot soldiers (called “creeps” in-game, as a reference to DotA) now spawn automatically from your motherbase in waves of four, players are free to customize their loadouts to their heart’s content with all sorts of units, from defenseless area-scanning drones to heavy artillery like the Gemini and Goliath tanks. Combine this with fact that each unit type has several classes and variants, each with their own strengths and weaknesses, and you have a game that never plays the same (especially on multiplayer), something which couldn’t be said of Herzog Zwei. 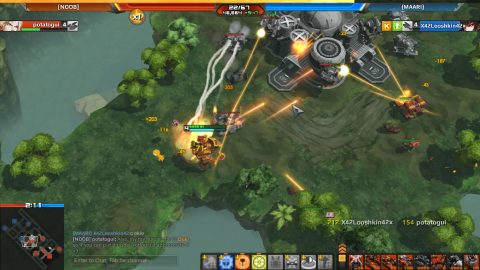 Herzog Zwei’s multiplayer mode may have been innovative back in the early Genesis era, but nowadays it feels extremely tame and slow-paced, especially when compared to later, crazier sci-fi RTSes. Carbon Games knew that, and jacked up the Herzog formula’s fun potential tremendously by allowing up to six players to either compete or play cooperatively in a variety of ludicrously fast-paced maps and game modes, including Deathmatch and Capture The Flag, with the ability to create custom lobbies allowing players to tweak and mess with almost every single aspect of a match, from unit movement speed to build priorities. People who prefer to play games alone are also accounted for in AirMech, with two short tutorial campaigns being included in a recent update (as of this writing) and all game modes having single-player options available. 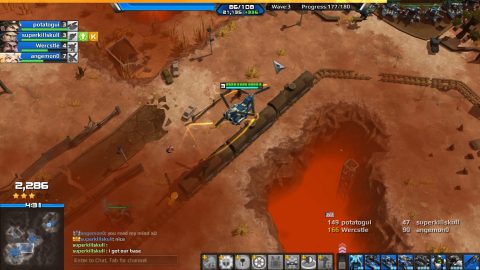 AirMech’s most unique and most consistently popular game mode, however, is Warzone, in which groups of up to four players team up to fight against the AI-controlled hordes of the evil Iron Hand in exclusive maps, each with their own set of unorthodox objectives. All this ties into the game’s plot, which tells the tale of the war between the Earth Command, scavengers and the hordes of the Iron Hand in a nuclear war-torn Earth – the former being a group of human AirMech pilots from a variety of backgrounds under lead of the elderly yet badass General Samson, who dreams of restoring the planet to its former glory, while the latter two oppose the organization for profit and the total annihilation of humankind, respectively. This plot is reasonably deep without feeling intrusive, being developed through brief dialogues between Samson and other characters during single-player or co-op missions, item descriptions, unlockable text logs and your co-pilots’ biographies (all co-pilots giving your AirMech of choice buffs, debuffs and other special skills when equipped, further increasing the amount of customization options available in the game). 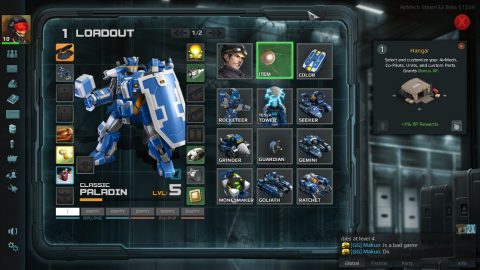 As you can see, variety is the name of the game in AirMech, and this applies to both paid and free players. Yes, AirMech is free-to-play in all its three incarnations, with players having the option to buy items and assorted in-game goodies with real cash to unlock most of the game’s main multiplayer content early and help fund Carbon Game’s ongoing development efforts. The full AirMech Prime package (which includes all nine standard mechs, an exclusive skin/variant of the Helix mech, tons of in-game currency plus several other goodies) costs US $19.99 as of its writing, but Carbon also offers several item bundles of varying sizes and prices as an alternative to it, with individual purchases of Diamonds (the game’s premium currency) also being possible. Players who spend any amount of money in the game are granted Silver VIP status – which gives access to faster XP and currency gain plus an otherwise-locked stash of extra Diamonds accumulated through playtime – with Gold, Diamond and Black Diamond VIP status and the perks they include being reserved for those whose spending habits revolve around AirMech. Gold VIP status is only temporary and doesn’t differ much from Silver VIP (which players revert to when their Gold subscription expires, unless they claimed it via a promotional code), but Diamond and Black Diamond VIP statuses are completely different beasts, both offering exclusive cosmetic items, quests and shop sections, plus the ability to share some of their riches with other players via public, luck-based Diamond Rolls for those who possess them. All of this only works to help impatient players unlock stuff faster, however, since none of AirMech’s vital collectibles – mechs, items, units, currency, etc. – requires real money to be accessed; this means that any player – and I mean [i]any[/i] player, since the game rewards even the losing team after every match in all game modes – can purchase that rare, limited-edition mech/unit/pet/cosmetic if they try hard enough, without worrying about hitting a paywall on their way there. This, along with the daily quests and rewards, seasonal events and weekly tournaments the game constantly offers, serve as a great incentive for players to log into AirMech every day, if only just to interact with the incredible community that has been built around the game and to grab that sweet, sweet Daily Log-In reward. 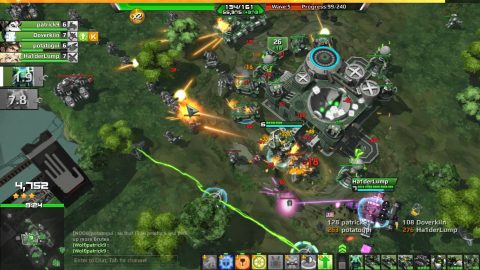 Speaking of community, it’s amazing how friendly and tightly-knit AirMech’s is. The folks at Carbon Games frequently interact with the game’s playerbase through its chatrooms and official forums, always taking their time to listen to player feedback, thank VIP users and guide new players through the game’s hoops when they aren’t working on the game or participating on its weekly tournaments, which they tend to organize with the help of the best and most popular players in the community. AirMech’s complexity, fast pace and generally unique feel has gotten the attention of several long-time fans of the RTS and MOBA genres, which more often than not contribute to the game’s popularity by posting videos and livestreams of it on services like Twitch and YouTube. In exchange, Carbon Games acknowledges these videos and the people who make them by linking to them in the game’s “Field Guide” menu and occasionally making ultra-rare Co-Pilots and other assorted collectibles out of them, which may feel a bit tacky to some, but is nonetheless one of AirMech’s more unique traits. 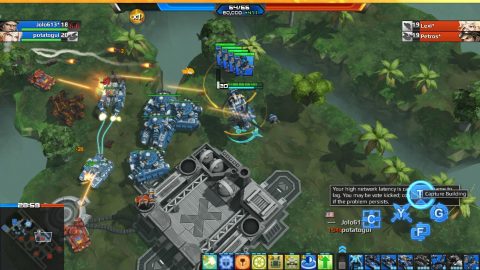 If there is one aspect in which AirMech falters, it’s the presentation. Sure, each map, mech, unit may look visually distinct like they did back in Herzog Zwei, but the visuals all lack the charm and unique style its competitors are known for, although that’s a complaint which also can be made against its predecessor. The music, composed by independent band Front Line Assembly, is middling industrial fare that doesn’t compare to Technosoft’s masterful compositions; it fits the game, but isn’t very memorable (if you like it, though, you can purchase it separately and get a few neat in-game bonuses to boot). Ignore these shortcomings, however, and you have one of the best, most unique free-to-play Action-RTSes/MOBAs out there, one which is always willing to welcome new players in despite its relative popularity and complexity.