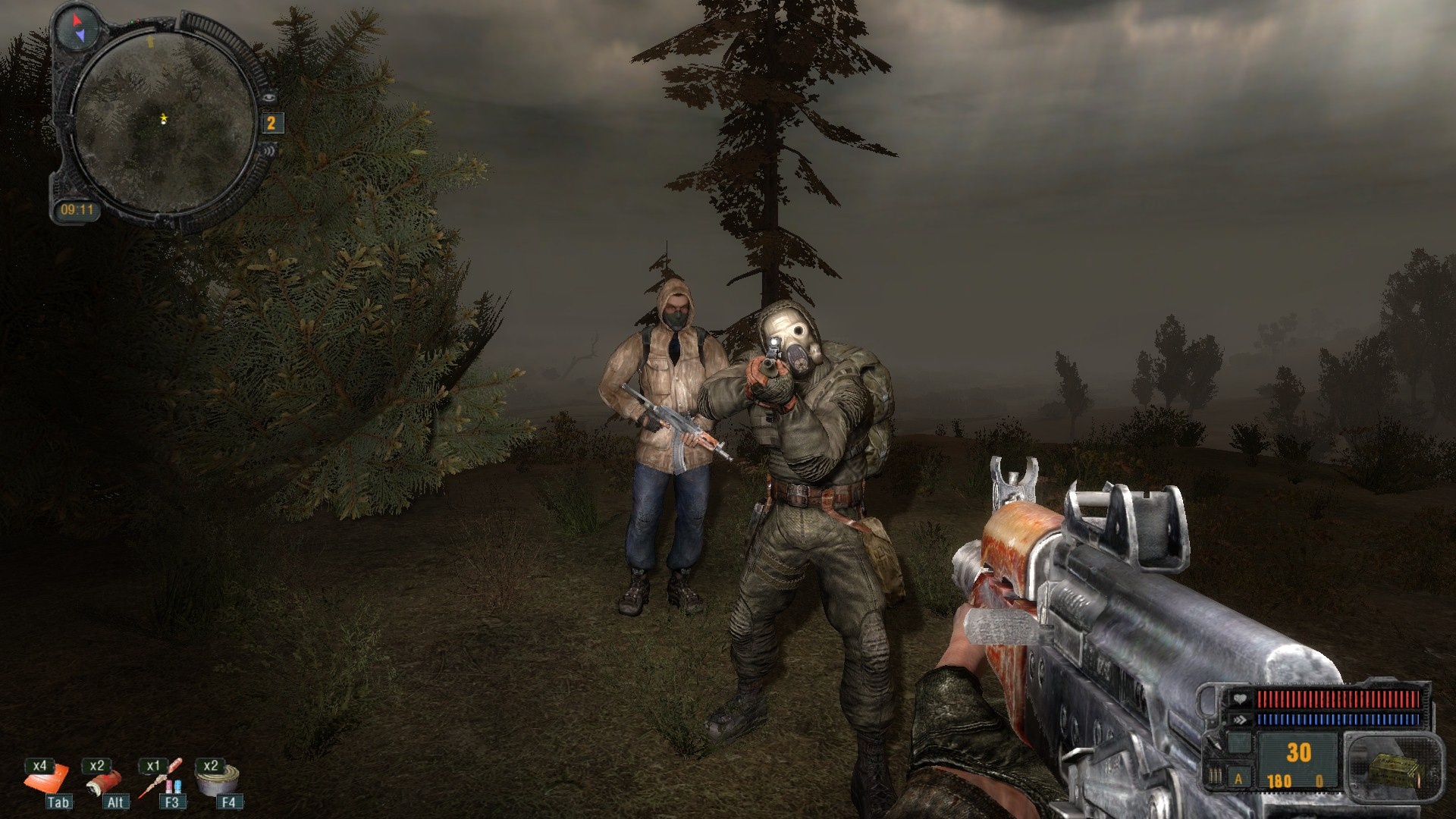 Stalker: Call Of Pripyat (COP) was to be the last S.T.A.L.K.E.R. game after GSC ceased development of S.T.A.L.K.E.R. 2 in 2012. COP took the X-Ray engine to its very limits and looked very long in the tooth when compared to PC FPSs Crysis and Farcry 2, which had both been released around the same time as Clear Sky and featured similar open environments. GSC decided to yet again try something new with COP, making the environments much bigger than before. On release critics poured on the praise for the game for being neither buggy nor “clunky’. With COP GSC took much of what made SOC and Clear Sky frustrating away, but also took some of the exciting and the unexpected elements away along with it.

While Clear Sky is set prior to the events of SOC, COP is set after. COP‘s plot goal differs from the other S.T.A.L.K.E.R. games in that your character does not want to reach the center of the Zone, but is tasked with investigating what happened to a lost fleet of helicopters that mysteriously crashed there. The player’s primary goal is to reach these crash sights, which are dotted around the first two areas. Once they have done so the end game is triggered and the path to the last area is opened. Later it becomes clear how the events of SOC relate to the crashes. 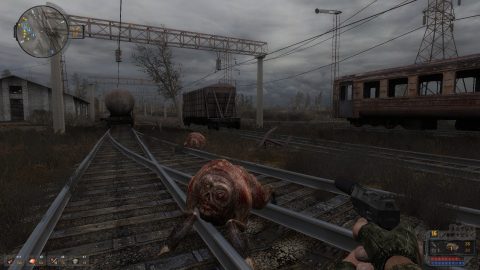 COP comprises of three large “sandbox” maps, perhaps taking cues from Clear Sky‘s newer maps. The first map is a swamp with two grounded, rusting container ships in the middle providing the only protection from radiation blowouts. The second area is set around an industrial train station on the edge of Pripyat and the third is deep within a residential district of Pripyat. The areas usually have a hub area, then various satellite landmarks where various side missions play out. There is a large amount of wilderness, particularly in the first area, where the player will find various roaming mutants. Unlike SOC there are only a few substantial underground areas that require a separate load screen. Most underground areas are brief “caves” away from the surface. COP has no carry-over areas from SOC or Clear Sky and there is an abundance of new assets art-wise. The three new areas are a mixed blessing, both seemingly fulfilling S.T.A.L.K.E.R.‘s original goal of sandbox apocalyptic simulation and making the gameplay much more empty and static in the process.

Missions are, on the whole, much more scripted and instanced than ever before. An early example of this being the discovery of a bloodsucker lair where the player follows an NPC around and has scripted encounters along the “tour’. Although this allows for a novel scripted sequence at the end of the quest where the player has to sneak past sleeping bloodsuckers, given S.T.A.L.K.E.R.‘s pedigree it could be argued leaving the player to explore the area by themselves would have been even more effective thrills-wise. There are some missions, such as an early attack on a heavily-armed mercenary base set inside a waste processing plant, where this is the case, and for my money, these are the most successful.

Outside of missions there a lot happening in COP. Roving bands of different factions and creatures pop up here and there in the environment. Because the map is often very barren of obstructions and the groups walk in a tight, straight line formation, these fights rarely amount to anything particularly tactical. Different groups do attack each other and it’s exciting to be thrust into the middle of a fight between Duty and a pack of dogs while looking for hidden supplies. After such a battle there are always ample resources for the player to collect. A consequence of this is the economy is extremely broken in favor of the player, even more ridiculously so than SOC. There is a new trade feature where weapons that have a certain level of degradation are unsellable but this does not help balance the economy anywhere near enough. Although GSC brought back a form of the A-Life system to COP they seem to not have known how to give it much depth beyond wandering conflict. 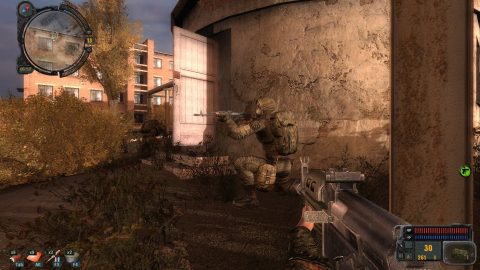 One improvement COP makes over the other games is how hidden stashes are handled. In the previous games stashes would only materialize once you had found information about one from a dead body. You would frequently find a stash only to open it and see there was nothing inside. This disincentived exploration, particularly in SOC as there was nothing to gain by it. COP improves this by having all the stashes already hidden in the game, making exploring buildings, sewers and caves worth the player’s time. COP keeps Clear Sky‘s artifact detector system, as well as its item upgrade functions, and both work well in this game. The unique anomaly idea is also expanded to include some interesting world-bending puzzles.

COP is unique in the S.T.A.L.K.E.R. series of having no moment in the game where you are completely outgunned and unprepared for what you have to face. Often called the “hobo phase” by S.T.A.L.K.E.R. fans to describe the lack of resources available to the player in the early game, it is arguably the most thrilling part of a S.T.A.L.K.E.R. game. In the Clear Sky‘s entire first swamp section, for example, the player only has antiquated break-action shotguns and weak pistols to take on bandit strongholds. In COP the broken economy and the weapons you pick up from dead NPCs, not to mention the fact that the player starts with an assault rifle, means this phase is over extremely quickly. While the other Stalker games do a fairly good job of keeping the player constantly on edge, there are very few instances in COP where you don’t feel in complete control of the situation at hand and this above all often leads to ennui.

Multiplayer in S.T.A.L.K.E.R. is only mentioned in this article for completeness” sake. All three games have Deathmatch, Team Deathmatch, and Capture the Artifact (a CTF variant) modes. Anomalies play a part in the action with them moving around the multiplayer maps as combatants fight. The games have ranking systems, unlocking more advanced weapons as players win rounds. Weapons and upgrades are bought Counterstrike-style through a menu. Unless you have friends that want to play on a LAN connection, S.T.A.L.K.E.R. multiplayer is largely dead, with only some Eastern European groups still playing. It is not worth your time at this point in all honesty.