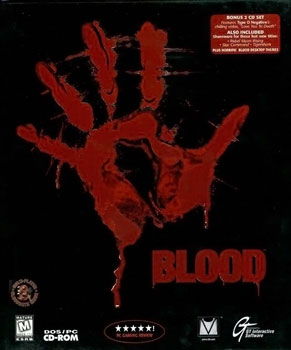 In the mid-nineties, FPS giants like Doom, Duke Nukem 3D, and Quake ruled the roost, causing gamers to sacrifice their social lives and embrace the Dawn of the Deathmatch. Video games had never been so fast, so intense, and so brutal. Lurking in the shadows of these computer entertainment titans was a shooter that only managed to garner a small cult following – the freakish goth cousin of Duke Nukem 3D that, for some inexplicable reason, seldom caught anyone’s attention.

The game was simply called Blood. It was the first game developed by Monolith Productions, who went on to create the successful F.E.A.R. franchise. And it’s the most underrated shooter of all time. 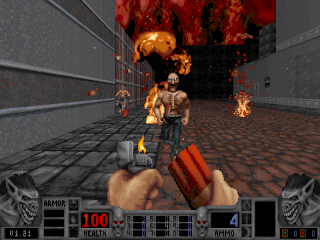 With an unmistakable visual and atmospheric style that marries H. P. Lovecraft with Unforgiven and Evil Dead, Blooddrops the player into the Roaring Twenties of a dilapidated America where violence is so over-the-top it’s borderline parody. You are Caleb, a cold-hearted gunslinger-turned-immortal cult leader, who is inexplicably forsaken and killed by his beloved god, Tchernobog (remember your phonograms when trying to pronounce that one). Furious over his pointless death, and that of his true love Ophelia, Caleb embarks on a bloody quest for revenge against the Cabal cult. The story is told in brief cutscenes rendered in some of the ugliest CG models the mid-nineties had to offer, but don’t worry, the rest of the game looks morbidly fabulous.

Your goal as Caleb is simple: kill everything with reckless abandon. That’s nothing new, since it has been the point of every old school FPS since Wolfenstein 3D. The big difference, besides the emphasis on horror, is the fact that the protagonist is not a hero in any sense of the word. Duke Nukem was a macho prick, but he knew bad guys when he saw them, and he always fought to save humanity because he was the only one badass enough to manage it. B. J. Blazkowicz was a gun-toting Captain America, always fighting the Third Reich wherever it reared its ugly head. Basically in every other shooter of the nineties, you were a hero or antihero fighting the forces of evil for the good of the human race. 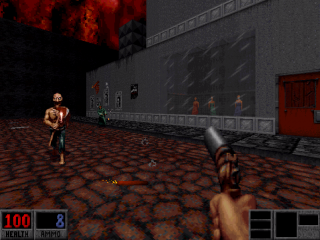 Caleb stands out from this flock like a wolf in a hen house: he is a force of evil, a mean, maniacal, murderous bastard who laughs and sings Frank Sinatra tunes while blasting people to bloody giblets, out to avenge himself and maybe his equally crazy live-in girlfriend. Saving the world from the Cabal’s malignant presence is merely a byproduct of his killing spree. In Blood, you’re probably the evilest dude in the game: nobody else is setting people on fire with hairspray flamethrowers, tossing dynamite on unsuspecting people like confetti, or torturing hapless victims with a voodoo doll. And it’s totally refreshing, especially since you know your victims deserve it. It’s impossible not to fall in love with Caleb, mostly thanks to the snide and gravelly voice provided by Stephan Weyte as he sings, cackles, and quips his way from one level to the next, in a more maniacal and mean-spirited manner than his Build Engine peers.

Ahh, the Build Engine – the most prevalent game engine of the nineties, created by Ken Silverman. Blood was the last commercially released shooter to use this engine, which also gave birth to Powerslave, Duke Nukem 3D, Shadow Warrior, TekWar, Witchaven, and a score of other shooters – obscure, unreleased, or otherwise. Each game further refined the engine and its atmospheric effects, with Shadow Warrior allowing the player to pilot forklifts and tanks built out of sector objects. Blood features no drivable vehicles (there are a few instances of riding in a dinghy or a mine cart), but it perfected the art of Build Engine atmosphere, with zombies burrowing through walls to get at the player, fighter planes carpet-bombing city streets, doors and other devices with a host of complex moving parts, and sprawling, highly detailed maps that better convey real-world locations than any of its predecessors. The player shoots it out in every conceivable location: a moving train, an opera house, a supermarket, a haunted hotel, a haunted mansion, a hospital, a hedge maze, a demonic cathedral, a pirate ship, icy caverns, and the innards of a colossal, living creature just to name a few… all of which are an absolute delight to remodel with bombs and bullets. And there are secrets (and booby traps) absolutely everywhere, just waiting to be discovered. 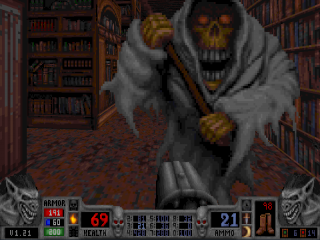 It’s not without the Build Engine’s quirks, however, such as “sector clipping” issues where a bomb blast occasionally affects any monsters standing on a table, but not around the table; or a harmless-looking door crushing Caleb to a pulp when it closes on him. The full status bar often suffers from display glitches such as general flickering, spazzing numbers, and unchanging ammo and health values – for some reason the smaller bar doesn’t do this.

Blood is not a gory walk in the park: it is infamously hard. Everything in Blood can kill you with little effort, ammo tends to be on the scarce side at times, and monsters get tougher and more numerous with each difficulty setting – attempt the Extra Crispy setting at your own peril. Even on normal difficulty a mundane battle can leave you with 20% health and only a handful of shotgun shells to spare for the next one. Poke your head around the wrong corner and a cultist will gleefully shoot it off. Impossible-to-hit bats and rats dog your steps and pick away at your health like tiny, squeaking jackhammers. Disembodied hands grab your throat and blind you as they choke you to death, and no sooner do you finally shake one off, another is waiting to take its place. A spider’s bite leaves you too drunk and dazed to hit what you’re aiming at, much less keep from bumbling into the same goddamned spider and getting bitten again. And a boss monster that doesn’t kill you in one hit is a rare thing indeed. But ragequits are even rarer, because Blood‘s inherent challenge level always leaves you with an orgasmic sense of satisfaction when you finally clear a map (or come out of any skirmish alive). 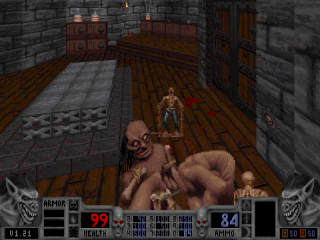 Blood is often celebrated for its unusual arsenal of weapons, which takes a refreshing break from the standard fare of other shooters from the same era. Foregoing the stale lineup of fist-pistol-shotgun-chaingun-rockets, Caleb’s arsenal instead showcases what a resourceful badass he is: set monsters on fire with a flare pistol or aerosol can and watch them flail and scream in the street; blast them in half with a sawed-off shotgun or a Tommy gun; give them inexplicable eye pain with a voodoo doll; even jab ’em fulla holes with a pitchfork! Best of all are the plentiful dynamite bundles, which can be used in so many fun and creative ways that you nearly weep when you run out of them: light the wick and toss them around a corner or onto an enemy’s head, place them with a proximity switch wherever you expect an ambush, or set them off whenever you want with a remote detonator. Nearly every weapon has a normal and alternate fire mode to maximize your destructive pleasure.

The controls do take some getting used to for modern gamers: you can configure Blood to use the WASD/Mouselook setup with a bit of effort, and although steering Caleb is initially a bit wonky, you get used to it pretty quickly. You don’t get used to the finicky auto-aim, which is difficult to disable and sometimes isn’t on speaking terms with the mouselook mechanics: often you can’t seem to hit monsters directly in front of you if they’re half a sprite below you. One of the downsides to playing with old software. 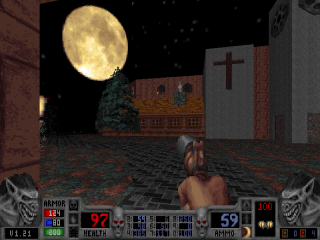 Back in the day, Monolith knew how to create levels with a palpable sense of dread and horror ambiance thick enough to spread on toast, but they also knew not to take themselves too seriously. There are times when the violence is so over-the-top you can’t help but laugh, and Caleb’s snarky remarks don’t help, especially when he’s forgetting the lyrics to “The Good Ship Lollipop”, taking a refreshing sip from a hospital blood bag, or looking at a mirror and freaking out at his own reflection. There are jokes and references all over the game, whether it’s a pub morbidly named after the Cask of Amontillado, a funeral viewing with “Rest In Pieces” lovingly embroidered on a laurel wreath, or the obligatory corpse of a rival FPS protagonist (see if you can find him!). It all helps to remind you that, no matter how brutal or scary things get, it’s still just a game. If anything it’s a monument dedicated to humanity’s love of base entertainment.

But it is definitely not for the squeamish. Blood is easily among the top ten most violent games ever made, even by today’s standards: in the past, many games have met with controversy over violent content, but they still don’t hold a candle to this one. Enemies gout fountains of blood and explode into clouds of entrails on a regular basis, burning enemies flail and shriek in pitiful agony, and every death scream is deafening and bloodcurdling. Most players know by the end of the first map if the violence is too much for them, and can always switch to Outlaws if they want to play a less gory but equally badass gunslinger. 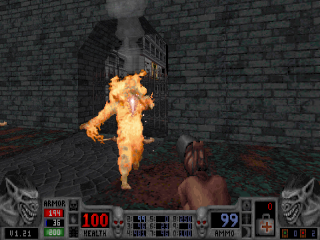 Despite its cult status, Blood‘s 1997 release was successful enough to warrant two expansion packs. The Plasma Pak, released the same year, adds the fifth Post Mortem episode and a host of extra enemies, including new varieties of cultists and a new boss monster. There’s even a rare enemy referencing Army of Darkness: break a mirror and you’re mobbed by tiny Calebs! The maps themselves are as tough as it gets, sometimes to an annoying degree, and the new monsters quickly prove to be under-utilized – if it were two new episodes, maybe they could have been used to their full potential, providing unique tactical obstacles instead of just being lumped in with the regular monsters for the sake of it. There’s maybe one spot in the penultimate map where Fire Pods are a unique threat, and the Little Calebs are restricted to popping out of broken mirrors, rendering them little more than a rare joke enemy. The Beast nonetheless makes a sufficiently tough final battle and a worthy addition to the bestiary.

The second expansion is Cryptic Passage, released in 1998 by Sunstorm Interactive (developers of the far less celebrated Duke It Out in DC expansion for Duke Nukem 3D) , which adds the sixth and longest official episode at ten maps. There are no new monsters presented here, but the maps are as nicely designed as the best maps in the original. The secret map is especially unnerving and features a truly creepy gondola ride. 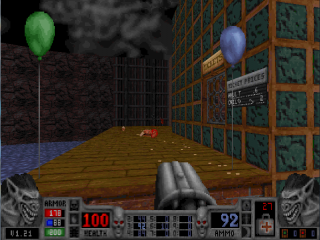 Both expansions are included with “One Unit Whole Blood”, which can be purchased on Steam and GOG.com, and both are highly enjoyable additions to the original game’s content. There are also plenty of fan-made maps and episodes on the internet, such as Rage Against the Machine and Death Wish. Check the Blood wiki for a fat list of completed projects, many of which are Russian. Good luck getting any mods to work this day and age, though – it’s an odyssey and a half for some, but probably worth the effort if it means more Blood to splatter. 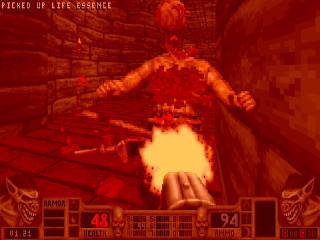 For those of you with guts of steel, what the hell are you waiting for? Get the “One Unit Whole Blood” package and boot it up for a bloody good time. It’s good to the last drop.