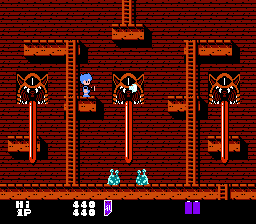 The article is featured in HG101 Digest Vol. 3: The Guide to Retro Horror. Please check it out!

Youkai Yashiki (translated as “Demon Mansion” or “Ghost House”) is an MSX game released by Casio for the MSX in 1986, and followed up by an FDS remake from Irem the following-year. It puts you in the role of a boy named Kouji, who is exploring a haunted house to look for his missing sister.

Through each of the five stages, the goal is to hunt for talismans, then look for and kill the level boss. Your only weapon is your flashlight, which shoots out little beams. Its batteries actually determine both its strength and your health. In other words, getting hit will both damage you and decrease your attack power. And at anything but full energy, the flashlight projectiles are extremely short range. Thankfully, there are riceballs strewn throughout, which you can pick up and collect. If you bring one of these to one of the jizo statues found in the levels and offer it to them, then they’ll replenish your energy as well. 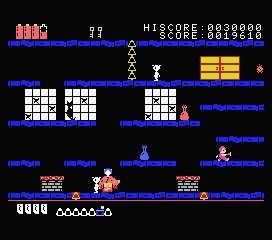 The game utilizes flip screen scrolling, as a result of system constraints on the MSX, though also helpful for drawing maps. In addition to finding talismans, you also need to find certain items lost by your sister (at least in the MSX version). Each stage has a number of warp wells (undoubtedly inspired by Super Mario Bros), one of which will transport you to a secret room within that level that holds one of these essential items. A rather cool aspect of these wells is that they can not only teleport you around a given stage, but across all of the other levels as well, giving the game a sense of interconnectivity. Not only does this let you visit previously completed levels – important if you missed one of your sister’s items – but you can even jump to areas later in the game, even without having beaten the bosses. When searching for talismans, the game also doesn’t care which level you found them in, which means you can grab four in one level, hop to some other level to grab one, then teleport back to face the boss.

The bosses can be a pain because they all require tricks that might not be immediately obvious. For example, the first boss is a decapitated head, whose long hair act as tendrils and attack towards the ground. What you have to do is run past them, absorbing any damage you might take, and then quickly jump up and fire a fire flashlight shots into its mouth. But you need to get the positioning right, or else you’ll either be knocked back or just flat out killed. For the second boss, a horned beast head, you just need to shoot enough of the lightning bolts it fires, as directly attacking it won’t do anything. Once you know the strategy, these guys aren’t difficult, but it might be frustrating as you die constantly until you figure it out. 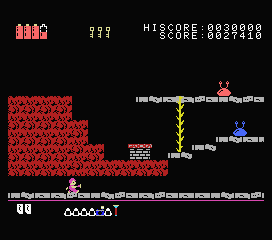 The visuals of the MSX game are a little simple, with a style very close to Konami’s The Goonies for the system, though not quite as detailed. As the title implies, though, there are a bunch of interesting yokai (Japanese demons) you encounter, including monsters that hide behind windows and attack by dropping their extremely long tongues; stationary rokurokubi, who look like women in kimonos but have gigantic, stretching necks that attempt to harm you as you jump over them; kasa-obake, which look like leaping umbrellas with arms, a leg, and a singular eye; and gigantic stomping feet that fall from the sky, which resembles something out of the Monty Python’s Flying Circus introduction. Their placement can be pretty annoying though, as occasionally they’re placed right at the edges of the screen, so they can be nearly impossible to avoid when switching screens.

The FDS port by Irem takes the same concept and mechanics, and even keeps the flip screen scrolling, but otherwise completely changes everything else about the game, from its visuals to its level layouts. The biggest change is that you only need to collect the talismans, and all of the hidden extra items have been removed. With that, you can no longer travel in-between levels, removing one of the coolest aspects of the original version. The levels in the MSX game weren’t all that big (particularly the first two), but here they’re quite a bit longer and more involved. 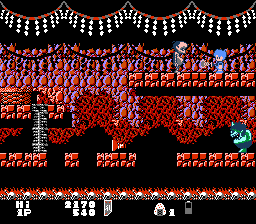 However, navigating them is a gigantic pain. The levels are often several screens tall and loop vertically, though there’s no indication as to where the “top” and “bottom” actually are. There’s a greater emphasis on warp levels for teleporting within each stage, which makes navigation even more confusing. Due to the more complex levels, you really need to draw a map, lest you wander around aimlessly for ages. Most stages are also (roughly) in the shape of various kanji, which is kinda cool to see if you see everything mapped out – the fourth area is based on the character for “death”, for example. Since the secret rooms are gone, they’ve been replaced with brief “hell” zones, where you’re transported to if you fall into certain pits. These are fairly short, and you just need to complete them before returning to the main stage.

While the first boss is the same as the MSX game, the rest are all new, including a shishimai (lion dance) demon, a haunted suit of armor, and a yokai based on a Buddha statue. They’re a little more visually interesting than the originals, though the actual fights are even more stressful. The bosses here take more damage, and rely heavily on you having a fully charged flashlight, so if you take a hit and are short on power, then they become extremely difficult, if not impossible. 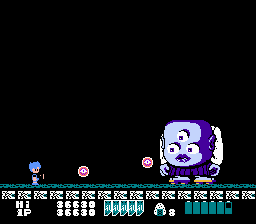 The visual makeover for the FDS is a pretty good one – the MSX game only included a few types of environments (cave and house), so giving each area a distinct look works to make each level more distinct. The soundtrack has also been completely redone – both offer catchy tunes, though the FDS version adds a few more to give it some more variety.

There’s nothing about the game that uniquely takes advantage of the Famicom Disk System (i.e. no save function or added music channels), which suggests it was just developed as a budget product. It’s unfortunate too – it definitely looks better, and while expanding the levels and redesigning the bosses isn’t a bad idea, they were both done so carelessly that it ends up being the lesser product. Meanwhile, the MSX game might seem a little simple compared to other exploratory action games, but it’s still interesting enough to be regarded as a minor classic for the system. 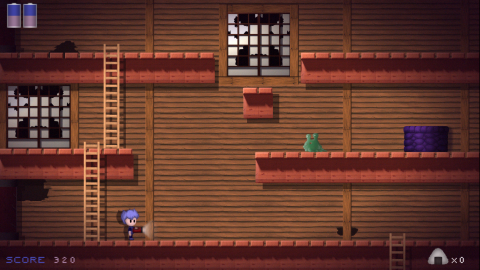 In 2018, Double V Games released a fan freeware remake for Windows. It includes redone HD visuals, and is based on the FDS game, but it only has one level. 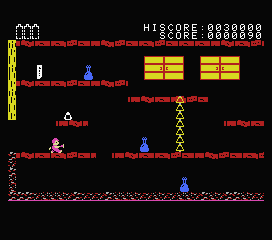 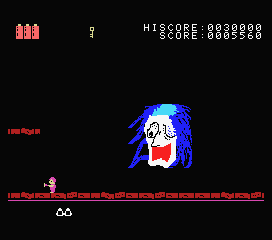 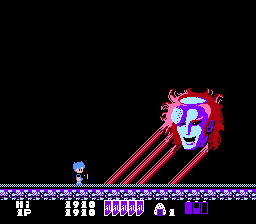