Though the hopes of a rumored direct sequel to Last Armageddon died with the demise of Brain Grey, Iijima later revisited the concept while he was the head of Pandora Box. After Armageddon Gaiden was released very late in the Mega CD lifecycle, only weeks before the Sega Saturn’s release. While Working Designs was planning to localize it for the West as A Side Story of Armageddon in 1995, they cancelled it as the Sega CD lost support stateside.

This game takes place in a parallel world called Eclipse, based on some sort of story or manga called “Majuu Toushouden Eclipse,” serialized in the magazine Marukatsu Mega Drive. After a hundred years of war, Eclipse has been conquered by the dragon king Volzark and his army of monsters. Humans are alive in Eclipse, but they’re reduced to livestock, fenced in and raised for consumption. The story follows five of his monster mercenaries as they investigate the ruins of human civilization.

You only control a single party of five monsters this time: Radune the Dragon, Jokos the Ifrit, Dhalzam the Golem, Freya the Succubus, and Loperus the Slime. Each has a particular elemental affinity and excels at a particular attribute, except Loperus who is bad at everything and embodies the “nothingness” element, which will later be a point of contention in the plot.

Upon reaching Mu, the monsters hear the voice of its ancient ruler, Ra Mu, who orders them to carry out his will and cleanse the Earth of inferior creatures. The party refuses, and as a result, Ra Mu triggers a celestial catastrophe and wipes out most life on Earth, as he’s apparently done many times before. The party adventures through the ruined world and meets King Sol of Atlantis, who tells them to find the ten spirits of his people, to restore their memories and gain the strength to defeat Ra Mu… 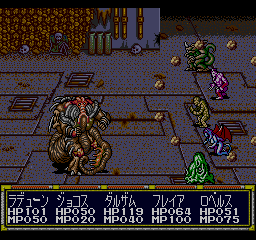 Combat is streamlined and much more attractive than its predecessor. It’s more or less the 16-bit Final Fantasy ATB system this time, so each party member can perform an action once their time gauge fills up. The pace of battles is much faster too, which is a welcome improvement. Monsters and enemies jump around the screen when they attack, and their spells have pretty decent animations as well. It’s nothing too special, but it is a vast improvement over the “sliding around the screen, exchanging equations” presentation of the first game.

One interesting feature lets you adjust the combat frequency from the menu whenever you’d like. There are three settings: Battles every few steps, normal frequency, and almost never. Because the bosses are so difficult, the game requires a lot of grinding, but it’s nice to be able to switch into “grinding mode,” or switch into the quiet setting when trying to navigate the dungeons.

A few signature elements of Last Armageddon return unchanged. Leveling up is largely the same as before – monsters gain EXP and level up individual stats by performing various actions in battle. Shops are still accessible from the menu, but you unlock more items and equipment to buy as your party levels up.

But evolution works rather differently this time around. About a third of the way through the game, you gain access to the Evolution Device, which allows each monster to evolve once per level by eating a human.

“Please give us permanent peace! Come on, eat us, evolve!”

The story tries to soften the blow of using human sacrifice as a central plot mechanic by having the humans ask you to do it, but it is pretty disturbing nonetheless.

Rather than evolving in stages, eating a human allows the monster to evolve into one of 48 different monsters, which you simply select from a gallery. Because there’s no need to combine monsters to distribute crucial abilities as before, evolution is less meaningful this time around. But the different monsters still differ in stats, elemental affinity, and special moves, so it’s worth experimenting with evolution whenever you can. Evolving is the only way to increase the caps on your monsters’ stats, as well.

But it wouldn’t be a sequel to Last Armageddon without a horrendous balance issue, of course. Most bosses are impossibly difficult unless you have a particular special attack “Gatling,” which halves an enemy’s HP. In order to progress without an absurd amount of grinding, it seems necessary to have each monster evolve into a form that knows Gatling, then remain in that form for most of the game.

Each human, of the 200 available, has different characteristics they give when eaten. Each one increases a particular stat and resistance to one or more ailments. But more interesting is the four Emotions they add to the monster – Love/Hate, Courage/Cowardice, Hope/Despair, and Patience/Desire, the latter ones being negative versions of the former. If a monster eats lots of humans with Love values and reaches a Love of 99, they will unlock an Ultimate Evolution near the end of the game, one for each emotion. The negative emotions offer the same Ultimate Evolution as the positive ones, so just be consistent one way or the other.

There are many outstanding designs in this game’s wide bestiary, but many are simply unclear or uninspired. They’re monstrous and terrifying, but some just look like scary piles of tentacles and flesh. It’s not helped by the abundance of greys and browns, which doesn’t help them distinguish themselves. The best designs have motifs drawn from things like sea creatures, insects, and intestines, added to the previous game’s motifs drawn from H.R. Giger, skulls, and pools of slime.

After Armageddon Gaiden’s story is similar to Last Armageddon’s, hitting many of the same story beats – the armageddon, the revelation that monsters are transformed humans, the adventure to regain memories… The plot differs often enough from its predecessor to be a new game, but in ways that are more like a traditional fantasy RPG. You go through a series of dungeons based on ten objects of the solar system, encounter five Elemental Wills, and defeat giant dragons based on the four archangels. The story follows a clearer formula than Last Armageddon, so its pacing is a lot clearer, but it feels much less surprising and original as a result.

The quest to regain the characters’ memories is much like the “regain the seeds of humanity” at the end of Last Armageddon, but less interesting. Those memories of humanity were triggered by artifacts of human civilization, like a comic book or a clay idol, revealing something about human culture; here the memories are triggered by the particular Elemental Will the monster once used to transform. The recovered memories are far less detailed here, too – rather than something like the Slime learning about the pollution that came with human progress, here the Slime simply remembers he was once a doctor on a human battlefield, and remembers how he didn’t give up in the face of hopelessness. It is a meaningful series of quests, but they’re given far less attention than the analogous quests in the previous game.

Much of the world’s rather convoluted backstory is told in various ruins, bit by bit, as the party meets the spirits of Atlantis and regains their memories. Ra Mu was once a human scientist in Mu who achieved immortality using an evolution device, allowing humans to transform into monsters, hoping to conquer the world. He succeeded, and the monsters continued hunting down humans in order to evolve further. Atlantis sent five warriors (the party), who absorbed the powers of five elements to become monsters, to defeat Mu. But they weren’t strong enough, and Ra Mu sealed their memories. Atlantis, in desperation, sacrificed its civilization to erase Mu off the map, and Ra Mu went into a deep underground slumber. Although human civilization recovered for a time, Ra Mu was able to possess President J. Davis and cause a nuclear holocaust.

So, for those who are counting, there are 5 apocalypses featured in this game: 1) Dinosaur exctinction; 2) Ancient monsters killed by asteroid; 3) Atlantis and Mu destroy each other; 4) Human nuclear holocaust; 5) Ra Mu wipes out the Earth’s surface. This long history of destruction is said to come from the sentient Sun cleansing its solar system of contaminants. Amusingly, this theory is first explored toward the beginning of the game, when the party reads an ancient human medical textbook that talks about metabolism:

“New things exist by eliminating old and unnecessary things. This is how they make up their bodies.”

“If the metabolic function of stars is to eliminate waste… is [the apocalypse] the will of the stars?”

As it turns out much later, the party is right. After acquiring the power of Atlantis, achieving the Ultimate Evolution, and descending into Mu to defeat Ra Mu, the party finds a monstrous being in the heart of Mu, the Will of the Star, which speeds up evolution and grants immense power to Eclipse’s lifeforms to hasten their destruction.

After defeating the Will of the Star in the final battle, the world’s balance is restored and life can begin again. The party departs to live normal lives in the new Eclipse, but Jokos tells them he’d like to try living on his own. They let him go, he reveals a plan to take over the new world, gives an evil laugh, then the game ends. No credits or anything, just a return to the Mega CD boot menu. It’s pretty safe to say that this particular cliffhanger will never be resolved.

After Armageddon Gaiden is almost certainly a better game than Last Armageddon, with every change making the game less tedious to play. But while it builds on the barren, lonely world and interesting mechanics of its predecessor, the story is much more fantastical and traditional in tone, abandoning the original game’s most successful subversion. So what you’re left with is an average and grindy JRPG with some very cool monster designs, but really nothing too experimental that would help it stand out from the many better JRPGs of the time.

Sega-16 – English translation of a plot summary included on the game’s CD.

Masaoki Satou’s Homepage (JP) – most of the game’s text with screenshots, with sparse gameplay commentary.