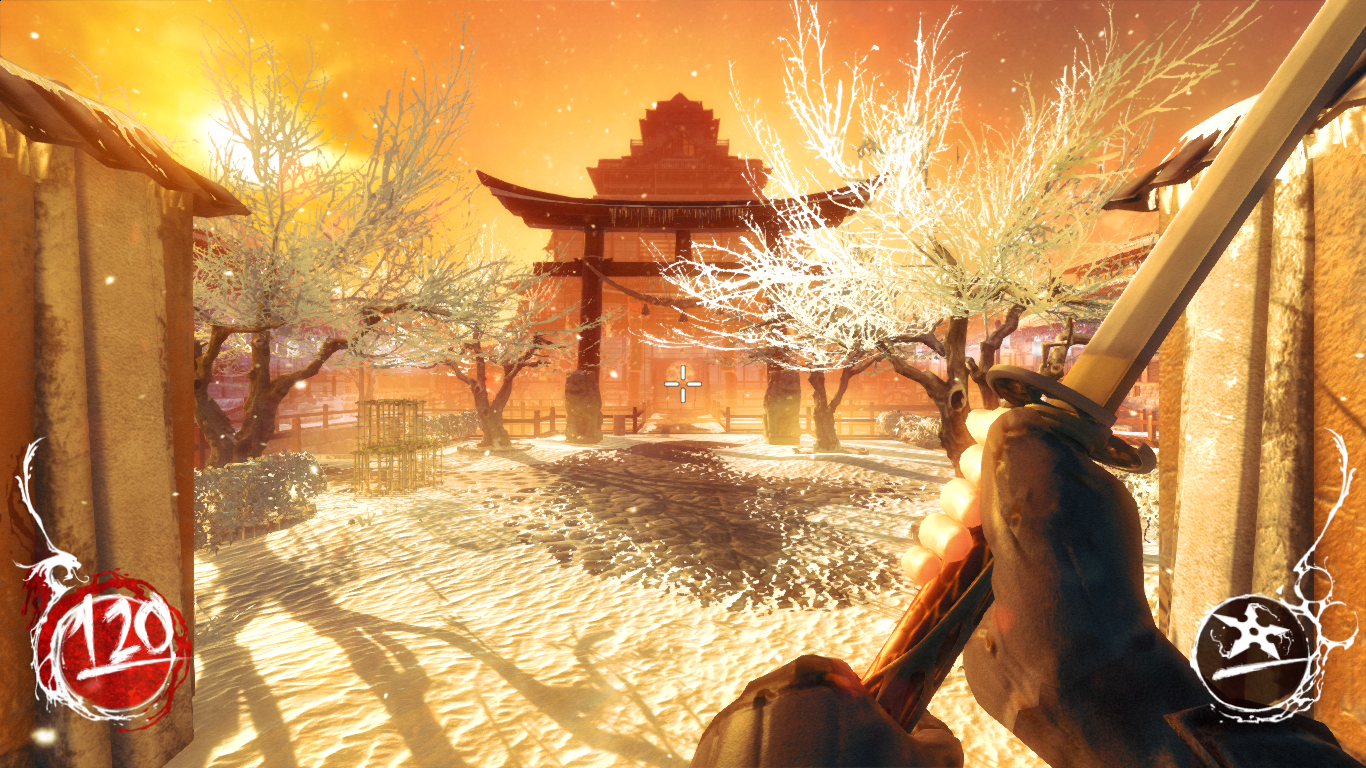 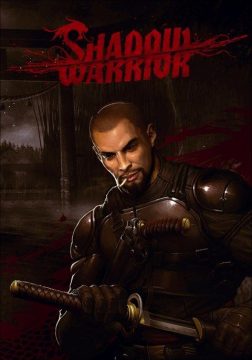 It’s hard to get a clear understanding of who actually owns Shadow Warrior these days, but Devolver Digital is handling the publishing duties, so it’s safe to say they have a claim on the franchise in some form now. They’ve always been interested in carving out a sort of personality that sets them apart from other gaming companies, which allows them to better support smaller titles, but they have tried moving into the big boy market as well. Croteam seemed to be the corner stone of that original plan, but after Serious Sam 3 came out in such a messy way, it became clear something else would have to be their try at making a big budget tent pole. 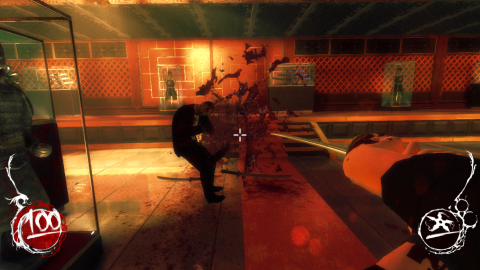 So, naturally, they found that by getting a small Polish studio who had only made an arcadey cyberpunk shooter in 2011 (Hard Reset) to make a reboot to a game where an offensive stereotype makes dick jokes while exploding demon monsters. Flying Wild Hog hadn’t really done anything else besides Hard Reset, and a lot of their staff hadn’t really done much before besides some background work for larger projects like The Witcher. Yet, they succeeded and brought Lo Wang into the modern age.

This new continuity takes the broad strokes of the original game, like Lo Wang initially working for Zilla and demon shenanigans via the shadow realm, and greatly fleshes it all out, adding new elements that finally give the series a sense of self it didn’t quite have before as Duke Nukem 3D but weeby. Lo Wang has been re-imagined as a comic and film nerd assassin, out to buy an ancient sword, called the Nobitsura Kage, for Zilla while psyching himself up by singing The Touch from Transformers: The Movie. Things go badly, and it’s not long before Wang finds himself with a partner from the shadow realm named Hoji on a chase for the missing sword being taken away by a golem. 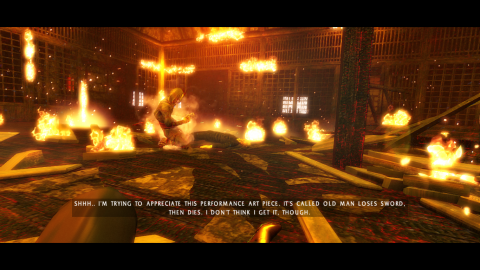 What’s really notable here is that this new continuity has a heavy focus on world building and character development. Lo Wang and Hoji’s relationship is the core focus of the game’s narrative, seeing the two come closer together as friends as things move. It also never quite lets you forget both are kind of terrible people, even highlighted with a short conversation about Travis Bickle in Taxi Driver. It’s a good balance of actual likable traits and self-aware joking.

The end result is a game that starts pretty funny, even if they push Wang being a nerd a bit too much, though him using his job to live out his violent fantasies is a solid idea. Then, it starts to shift into genuine pathos, even having an entire combat free chapter dedicated to letting the characters breathe and talk. Why Hoji is even in the human world is the core question that even eludes him due to missing memories, and discovering the truth behind that creates a strong tale about individuality and bonds that ends on an unexpected but appreciated sobering note. It is a genuinely emotional tale that would be impossible to imagine in the 3D Realms era. There is a questionably sexist element to it all, though compared to what came before, this is still a vast improvement. 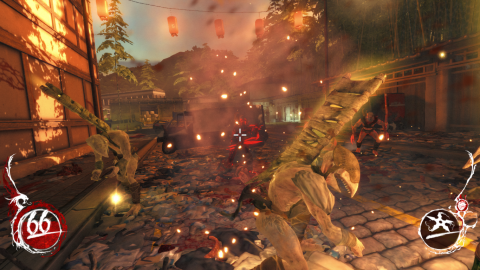 The new personality extends to the game’s art style and look, using beautiful comic illustrations for flash backs and settling for a modern urban and old Japanese architecture look spiced up with demonic carnage. Cherry blossoms and bamboo forests populate the world, creating a great contrast of the natural and gory supernatural intrusions upon it. The music does little to stand out but really makes each fight really have manic impact, and this is all helped by the great voice cast.

Jason Liebrecht (Abel from Street Fighter IV and V and Mordecai in Borderlands 2 and on) still isn’t an Asian actor, sadly, but his Lo Wang is a huge step up from the original. He gives him a fairly believable accent and gets some great lines that avoid stereotype gags. Instead, he’s more a clever jerkbag who uses his newfound “nerd” trait to toss out some surprisingly good lines that might actually go over your head at points. He plays off very well as the straight-man to Hoji, played as a sarcastic manipulator by Alex Dobrenko. Unlike Liebrecht, Dobrenko is a traditional live action actor, this being his only game role as of writing. Yet, it works, the cutscenes giving him just enough space to really have fun with the character, helped along by the fun, lively body language Hoji is given. 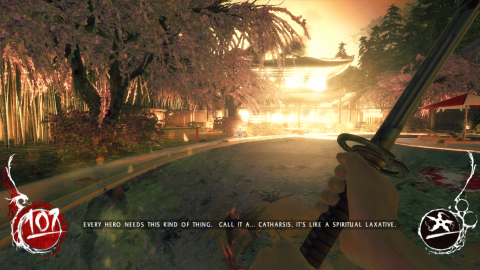 The series now has a strong personality all its own that doesn’t make one wince, and it can back it with gameplay. Shadow Warrior 2013, on suggestion of Scott Miller of the current 3D Realms, takes the katana weapon from the last game and upgrades it from a hold to slash wildly melee weapon to a fleshed out first person slice and dice toy with its own mechanics based around slash placement with your inputs, alongside three unlockable special moves. The divider of heavens does an extremely powerful thrust, circle of iron is a massive slash that hits everything around you, and wing of crane is a sword beam. With upgrades gotten from finding pieces of the Nobitsura Kage through the story, Wang’s sword nonsense becomes the corner stone of your fighting style. The shuriken even returns when the sword is equipped, though it’s even weaker and harder to aim, only good for breaking boxes.

Your weapon pool is smaller this time, but every weapon has a clear use that makes switching through them important. The Tosainu revolver does end up outclassed, but not as much as you’d think, especially with its fast alt-fire unlocked. It remains a solid crowd thinner the whole way, great for head shots. The SP-1 PDW makes a great replacement for the OG uzis, even letting you dual wield like the old days with its unlocked alt-fire. Not as much damage per bullet, but a lot of lead adds up. The crossbow has both a charge shot and sticky bombs you can remotely detonate for maximum nonsense, and the shotgun is a ridiculous thing that eats low level enemies for lunch, especially if you unlock two additional barrels for a total of four. 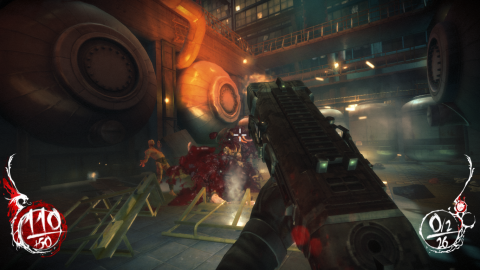 The flamethrower needs the unlocked damage boost to be of any real use, but it makes a great mid-range option and a way to deal damage to large enemies while you’re still thinning a mob. The rocket launcher lacks the expected punch in sound feedback, but it’s certainly effective, a go-to for big bads. It also has an unlockable laser sight and the ability to launch three rockets at once after some charging, though both these additions don’t flow great with the mobs you usually have to deal with. You can also pick up enemy hearts and heads like before, but now hearts act as an instant kill, and heads can fire a laser that does continuous damage as you hold the beam on the target.

This reboot also restructures battles into a Painkiller style mob design, with set parts in the levels where you have to deal with a bunch of demons before you can continue on. There’s a solid bit of diversity in the enemy roster, including the returning basic ninja enemies as the hoarding crawlers as the foundation. You get shielded enemies that lob fireballs from above, self-destructors, two types of flying baddies, teleporting swordwomen, summoners, hulking brutes, skeletons, and more. They’re all used well to spice up each encounter, and never let these moments feel dull. 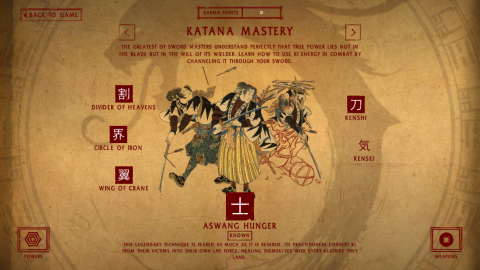 The only stinker of the bunch is the Berserker, comparable most to the pink demon in DOOM 2016. They’re both basically Serious Sam werebulls with armor, so you have to hit their back. Problem is the Berserker is a much larger enemy with an awkwardly placed weakspot and gives very little feedback when you damage it, so the best way to take them out is with multiple divider of heaven stabs. The game likes putting two of these around you at a time, and with large mobs in the late game, so this turns battles from fun chaos to slogs where the penalty for messing up is an often sudden death on higher difficulties because they can hit back hard. Bosses are also pretty unimpressive, huge behemoths with weakpoints to wear down with simple attack patterns. Only Zilla sticks out for his sword duels, which were amusingly not in the original release, instead added sometime after in a major update.

One fun thing here is the game rewards you for creative and effective battle technique by giving you a rating after a mob, which nets you bonus blood (aka battle experience). You can upgrade various skills and buffs with blood, while you can use money you’ve looted from chests or on the ground to buy weapon upgrades and even ammo if you absolutely must. Lo Wang also has some new ki powers that can be upgraded when you find rare ki crystals. They include a very useful healing spell, a protection spell with questionable use due to Wang’s versatile dashing, a shockwave that crumples enemies, and a “flux” move that traps the line in front of you in the air for a short time for free hits. While the shockwave and healing spell are appreciated, the other two are rarely useful as your weapon pool grows larger. The good news is that you can use them with any weapon, used with a double tap input method like Wang’s sword moves. 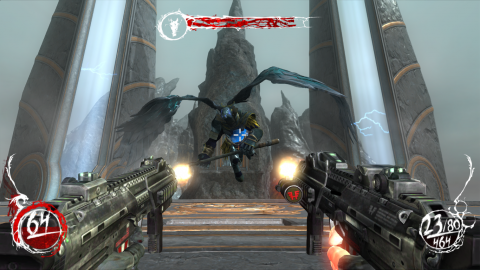 While the levels are mostly funnels, they have enough nooks and crannies to reward exploration, moving at a good pace for both story bits and bashes. That said, things start to drag once you reach the Zilla Labs set of levels, the complex suffering from a good bit of copy and pasting assist use. The rest of the game had been doing this to some extent, but landmarks well placed to keep you on track. This doesn’t really happen with the labs and results in some of the most tedious, confusing areas in the game. Thankfully, the last few levels more than make up for it, with some incredible looking sights to see alongside the memorable fights. 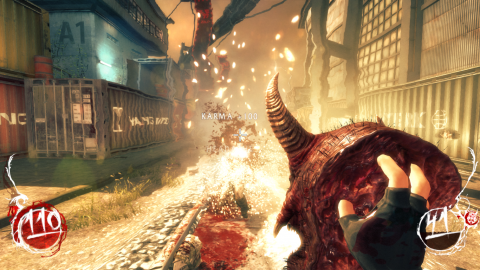 The Shadow Warrior reboot is an interesting, feisty game that punches above its weight class, but actually puts up a significant fight. Despite some clunky bits, poorly designed maps in the mid-late game, and some ideas that feel superfluous, the majority of the game is a big, enthralling high of gory anime sword-fighting intensity. The early mobs in this game rival end game battles in some other FPS games, giving you enough movement and strong enough weaponry to make it more than manageable. It’s a mixture of different, familiar FPS parts turned into something wholly fresh and original, a true franchise rebirth that the player base was more than happy with. There was even a free version of Viscera Cleanup Detail released for owners of the game all about cleaning up the mess after Wang left the first level, a cute bonus. Devolver had something special, and they wouldn’t waste it.

Shadow Warrior 2, though, would release in a form nobody expected – a looter shooter.