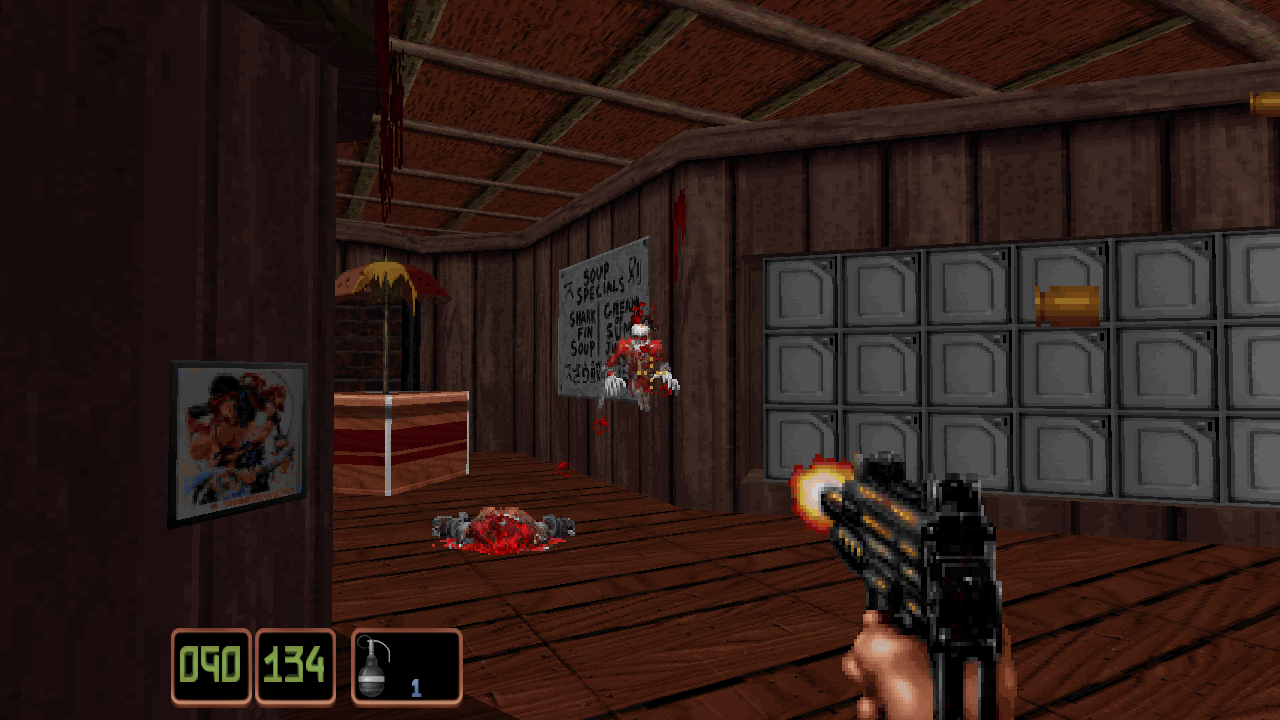 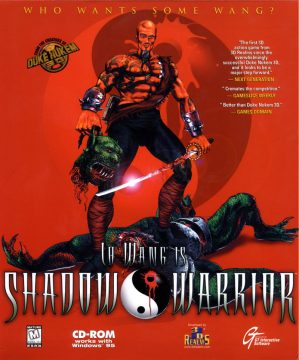 The legendary Apogee Software re-branded to 3D Realms in 1996 and released Duke Nukem 3D, a challenger to the massively influential Quake that met the first fully 3D FPS with high interactivity made possible in Ken Silverman’s Build Engine. They left a massive impact on the gaming world and created one of the most popular characters of the 90s, you all know this. What you may have forgotten is that they followed it up with an even more technically impressive game in 1997 that was the first to introduce vehicles in a first person shooter. You probably forgot by choice, but now that there’s an entire reboot franchise out there as Devolver Digital’s AAA wannabe big boy game, it’s time you all remember the original, the OG, the first Shadow Warrior. There is reason why you don’t see it talked about much anymore. 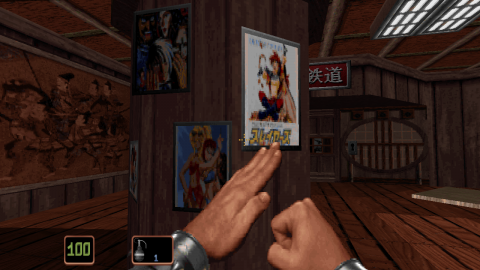 Still, it must be said that Shadow Warrior is an absolute blast to play. Things get going from the first second, a demon ninja jumping into your home and needing a good old katana to the face. Things do not let up from there, except when you get stuck trying to find a keycard or a switch hidden in a fireplace, but that was the norm for 90s shooters. Otherwise, your time is spent killing everything that moves and diving for the water while also launching a nuke at an army of mauling rippers, protected from the blast by the pixely liquid. Most noises are demon screams and explosions. It is action gaming distilled, focused on exploring a dense area and dealing with the legions hidden in there, often in hateful ways in this particular game. It’s not at Serious Sam: The First Encounter levels, but those shadow ninjas are used in some phenomenally nasty ways. Prepare for many an explosion.

This was basically a victory lap, 3D Realms spinning their wheels by doing some of their old tricks but better. The vehicles were surprisingly fun to mess around with, even though they mainly looked like abstract blocks in most cases, and the nasty monster spawn traps just added to the game’s manic action vibe. Like the best old school shooter, there was a focus on replaying maps and doing better than before, even challenging you to beat the devs’ time. 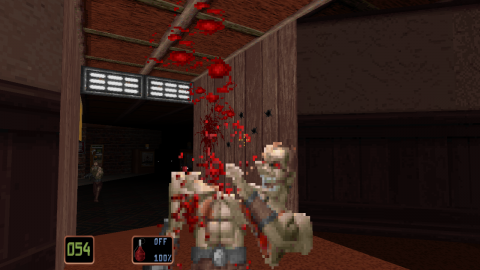 The map designers really hit it out of the park, majority done by Stephen Cole and Keith Schuler, making great use of the crunchy textures of the Build engine. While some of the more nature and old ruins focused areas are a bit plain, the few levels in urban areas have a real life to them, the secret level Auto Maul sticking out for the fun concept of exploring a car shop and display. The anime girls scattered around the game all look like terrible, potato faced homunculus, though in a charming “oh they tried” way.

The weapons aren’t as wacky as they were in Duke Nukem 3D, what with no shrink rays and the like, but there is fun to be had. The game’s shotgun equivalent, the riot gun, has an alt fire for a full clip fire, making it viable for larger enemies. The missile launcher allows you to also fire heat seekers and the very rare nukes, the latter so powerful that you can die just from witnessing the blast going off. The pistol is switched out for shuriken, which you can throw three at a time and can bounce off walls. You can use two uzis at once, there’s a rail gun because why not, and you can stick your fingers in a monster’s head and make it shoot fireballs. The ripper hearts are arguably better, summoning a mirror image for max carnage. There’s even sticky bombs, which are not recommended for this game because shooting a missile or bullets or a rail laser at a monster is usually more effective. They did it first, though. 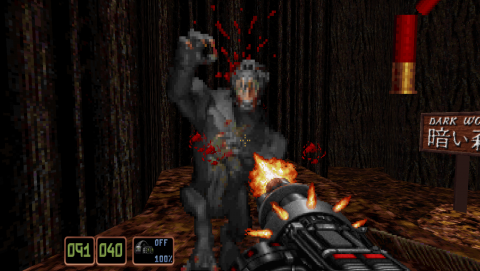 The extra tools you can make use of are a more mixed bag. There are a large array of gadgets and grenades that aren’t particularly useful outside the dark areas that may benefit from having the night vision goggles, which just highlights enemies for easier targeting, and a good old med-kit. The one exception is the smoke bomb, which is basically broken. Use it, and for the next twenty seconds or so, not a single enemy will be able to lock onto you and attack. This can be abused very easily, like in the final boss battle, where you can just use a smoke bomb and go up to the boss and punch it in the crotch repeatedly with no real threat to you until the effect wears off. Using your katana is also acceptable and can easily drain half of its health before the effect is over.

Shadow Warrior is a game of many firsts, and it did clearly influence the genre in small ways. Yet, it tends to be overshadowed by its many contemporaries. While this is partly because full 3D environment shooters were beginning to rule the genre, the larger problem that such a fun, well designed game (despite some frustrating traps) got lost in the sands of time becomes apparent the moment you hear the voice of the main character. Duke Nukem became an icon because he was a fun, cheesy send up to action and B-grade sci-fi film heroes given live by the talented Jon St. John. He brought personality to his game, made a cool shooter into a franchise with personality. 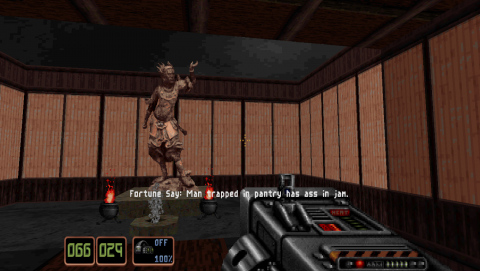 This game’s lead, Lo Wang (ha ha), is voiced by John Galt, who is fairly talented but also one of the most questionable resumes in game voice acting from that time. See, Galt voiced quite a few Asian characters, like Tracer Tong in Deus Ex and Kage in Daikatana, and was white. He also gave these characters a distinct accent. It’s not great optics in general, partly because that accent is exaggerated a tad, but it is at the absolute worse in Shadow Warrior not just because of his performance taken up to eleven, but also because Lo Wang’s lines are horrifically racist.

Lo Wang is a character heavily based on the characters in kung-fu flicks that the team loved watching, with a dash of anime in there. You can tell there was latter inspiration by all the Slayers and Black Jack posters, among others, scattered through the levels. Lo Wang speaks like a character from such a kung-fu flick – particularly one dubbed in English, which were often dubbed very poorly. Mix that in with a mess of racist jokes (hope you like cute references to nuclear warcrimes!) and someone thinking it was a good idea to have Lo Wang occasionally speak with broken syntax or pronouncing Ls as Rs, and you have someone who ranks up there with one of the worst video game protagonists ever created. 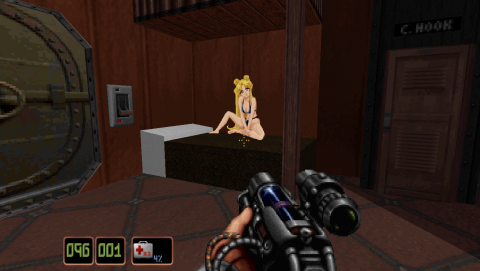 Original flavor Lo Wang shares space in the hallowed halls of yikes alongside the cast of many a Redneck game that was all the rage in the early 2000s for some reason. The moment you hear his “row your boat” line in the level Rising Son (the first set after the shareware level set), everything is cemented. There is no wiggle room here, Lo Wang might be the single biggest stain on the legacy of 3D Realms, or would be if not for the existence of Duke Nukem Forever. So, of course, he sings a rap song. It plays during the credits. Hard to say if it is better or worse than the Rogue Warrior rap.

The entire game also shares similar issues to Lo Wang, from an entire enemy set being named an obscure slur, to the game itself constantly mixing up Japan and China. It does take place in Japan as stated in the manual, following a vague story about bodyguard Lo Wang discovering his employer Orochi Zilla (because Japan) is going to use demons to take over the world and having to stop it. However, Lo Wang is based more on Chinese stereotypes and has a Chinese name, yet also uses throwing stars and a katana. There’s a level named Shanghai Shipwreck, Shanghai being a place in China and not Japan. There are fortune cookies everywhere as extra secret collectibles. They are also written occasionally in broken syntax, much like Lo Wang’s dialog, as if they want you to read them in a particular, poor taste way. 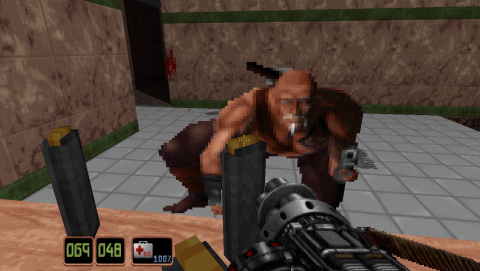 Shadow Warrior is frustrating. There is a very fun game here, with aesthetic level looks at points, but when you’re having a blast shooting down demon hordes, Lo Wang will open his mouth and then you remember the context. You fight a sumo wrestler who has poison farts and just deflate. This should be a classic, but it’s very, very hard to get past the ugliness of its vastly outdated racism. If you are interested or are just a bit of a gaming history buff, the original DOS game is on Steam for free, as is a Classic Redux version from Devolver Digital (where these screenshots come from) that has a mess of useful extra features, plus a fan made expansion called Twin Dragon, and Sunstorm Interactive’s formerly unreleased Wanton Destruction. Modern 3D Realms also sold a remade version through their 3D Realms Anniversary Bundle, though that’s now gone due to legal action from Gearbox over the rights of Duke Nukem. 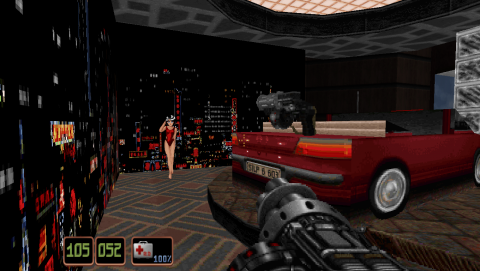 The strangest part of all this? Despite Shadow Warrior being easily the most embarrassing game in 3D Realms’ history, despite everything about it that should have made it a toxic property, it is one of their few properties still getting games made. Devolver Digital ended up mixed into all of this, high on snagging publishing rights for the Serious Sam franchise, and I guess they went after Shadow Warrior next since every other classic shooter franchise was claimed.

The games that resulted are rad as hell.