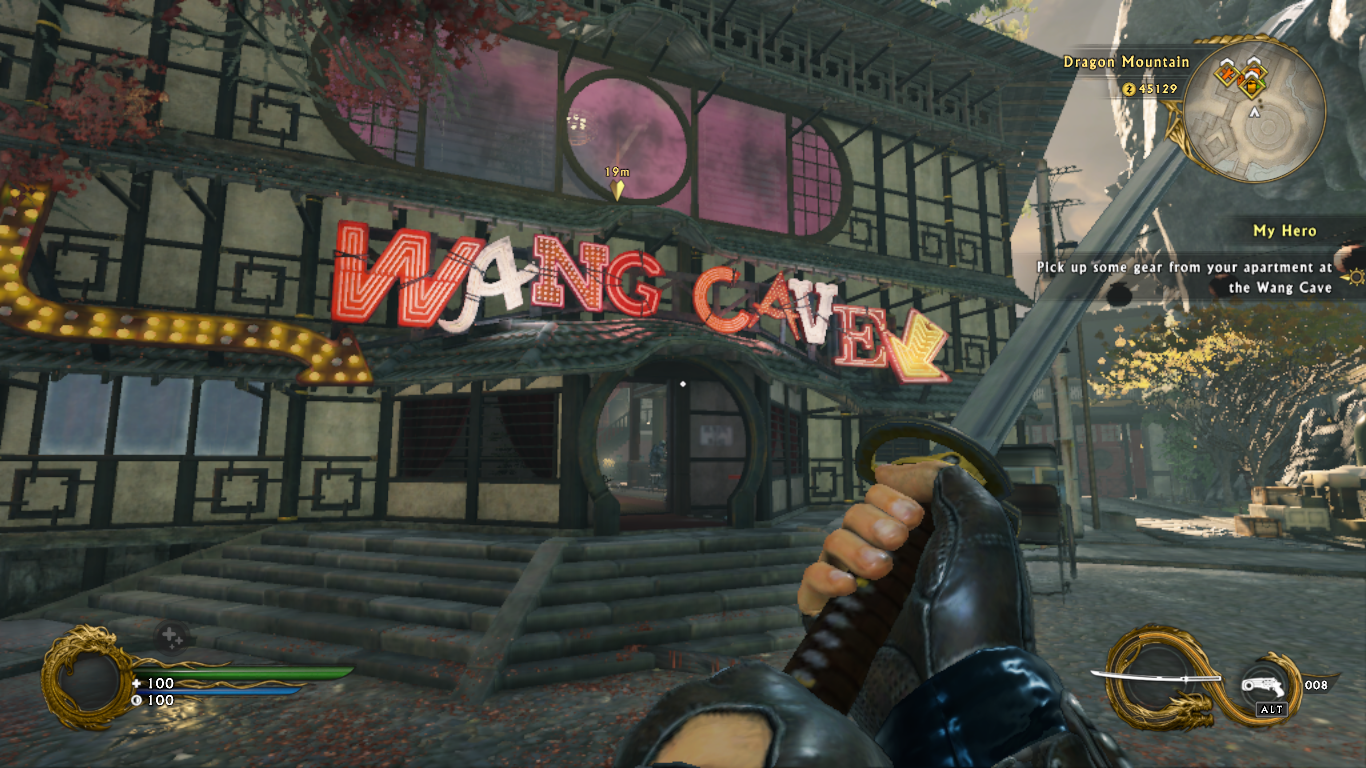 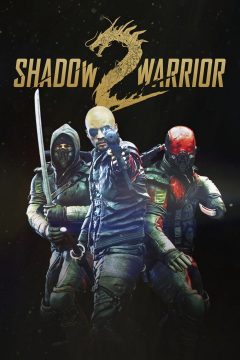 Note: Screenshots were taken on low settings, keep this in mind when judging the graphics displayed here.

Shadow Warrior 2 becoming a looter shooter seems odd at first, but it starts to make sense when you remember what Devolver Digital was trying to do with the reboot. They wanted to encroach on that AAA shooter space, and managed a worthy contender to do it. However, during that game’s development, this game released in 2012 that made all of the money ever called Borderlands 2. That started to change things. Shadow Warrior corrected direction quickly, and it ended up being a smart move. Shadow Warrior 2 outsold the reboot four times over, one of Devolver Digital’s most successful releases, and to its credit, it proved to be more than another pretender to the throne. There is genuinely nothing quite like Shadow Warrior 2 in its particular flavor of looting and shooting…though some of its narrative choices are worth questioning. 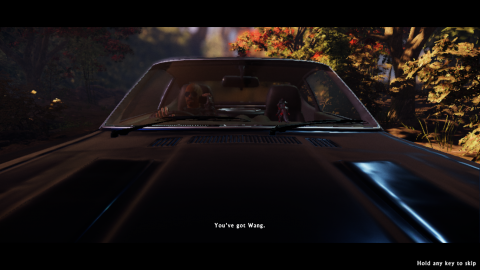 There’s been some fallout from the last game, as an apocalypse has gone on off-screen due to how Lo Wang dealt with things in his previous adventure. He’s now going solo again and working for a new yakuza boss, traversing a world where humans and demons co-exist, but many demons are still jerks who love murder and there’s a lot of mutated wildlife due to overlap from the shadow realm. Things are bad, but Wang cares little. He finally gets his chance to finish things with Zilla, who is how the most powerful man on Earth, but ends up in a more complicated situation as the soul of a possessed girl named Kamiko is sealed in his body while her’s is purified. Who Kamiko actually is ends up being the crux of the story, and Wang quickly finds himself in a mess even more complicated than the previous one. He copes with it by complaining and making one-liners, as usual. 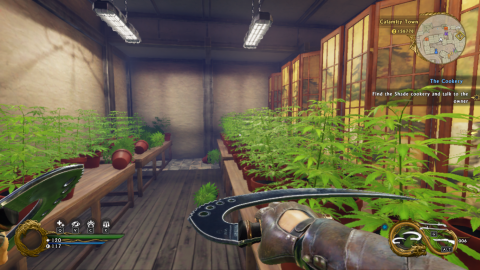 Hoji’s exit from the sequel is surprisingly well handled, with all of Wang’s development in the first game resulting in a truly self-assured badass who can quip with the best of them. The old running joke of flubbing his lines is done, though he could use a few more for as much game as there is here. Kamiko makes a great straight man foil this time, not taking Wang’s crap and nihilism, but the two are also similar enough to work well together towards a given goal and see eye to eye. It’s a good balance, and the rest of the cast is similarly strong, especially the reserved Smith Masamune, getting some great downplayed lines. The one thing that doesn’t work is that Wang is, uh, kind of racist now? 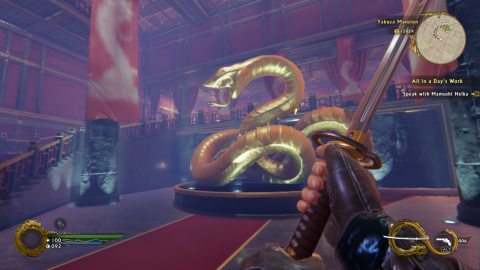 We have come full circle. Wang is now racist towards demons in a bizarre, jokingly saying he’s racist way, including with one he’s friends with that sells him guns. He also has weird conversations with Smith, who is black, wondering how he can be from a legendary Japanese swordsmith bloodline while he’s black. Spoilers: His dad was a, gasp, black man who had a child with a woman from the Masamune bloodline. These are attempts at humor that fall flat and just feel confused, an odd attempt to play up Devolver’s signature punk/outsider image in an off-putting way.

What is not confused is that the reboot’s undercurrent of misogynist story decisions are now just very bluntly misogynist text. Who the villain ends up being and why is really bad, plus relies way too much on the previous game’s shadow realm lore instead of expanding upon it, and Kamiko’s origins deserve about twenty different “yikes” one after the other. It’s a real shame, because there are a lot of fun ideas here, leaning the series towards black comedy with a heart of gold and jerk simultaneously. The balance just tips too much into gross plot beats towards the end. Points do go to Zilla’s characterization, though, and where they end up taking him and Wang works really well with their comically mean personalities. It’s another confident decision that pushes that this reboot continuity is something all its own. 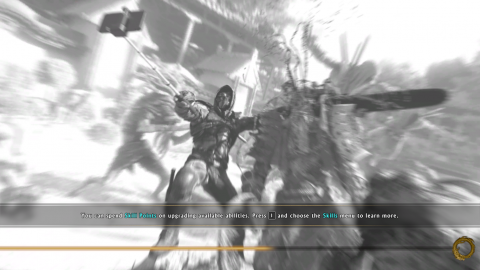 Oh, and hopefully you like lore, because you’re going to get a lot of it in the Wangopedia (deep sigh). You can find news reports and diary entries through exploration and progress through the main story, a way to explain what’s happened since the previous game and fill out details on the supporting cast. It’s not too distracting, thankfully, the main story telling you everything absolutely necessary, and the collected lore there to add a bit more to that story if you wanna look into things. It can also hint at later revelations if you remember a few small details only glossed over in the first game, a nice touch.

The gameplay proper remains thrilling and visceral, managing to stick out among the crowded looter shooter field. Wang still has a ton of his old tricks, including new ones like climbing and a double jump, but his various battle techniques are now put in a card system. As you play the game, you’ll find and earn cards that grant skills and buffs you can put skill points into. This allows the player to customize their own personal Wang, which works well with the up to four player online co-op. The majority of loot is also not weaponry, but weapon modifiers, granting different buffs with the occasional drawback. 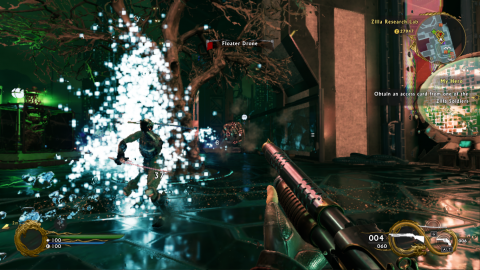 Guns, swords, and other melee tools are much more rare, but they’re also far more distinct from each other, not just slightly better versions of a previous gun, but weapons with their own qualities, animations, fire rate, projectiles, and more. Where Borderlands heavily randomized gun drops with a bunch of RNG decided possible bonuses or attributes, Shadow Warrior 2 just does this for weapon modifying gems, there to make your found and earned weapons more fitting to your play style. All these weapons are great fun too, though the chainsaws feel really underutilized, outmatched in just about every way to basic swords and blades in terms of damage per hit. The elemental damage system is also borrowed from Borderlands, and encourages more weapon switching via enemies with elemental resistances and weaknesses.

While story mission maps are set, any side missions you do are on randomly generated maps, which proves to be a double edged sword. It makes replaying missions and areas for grinding somewhat fresh, but also is made possible with a mess of copy and pasting that makes traversing these maps a chore. To make up for this, Wang’s absolutely ridiculous movement options let you cover a lot of ground, and these large, random maps fit extremely well for up to four Wangs jumping around like madmen and killing everything in sight. This also means encounters are usually random waves being generated, which keeps when you’re going to have to fight somewhat unpredictable. You can also find extra powerful enemies surrounded by weaker minions you can take down for a chance at rare loot, which is always worth the risk. 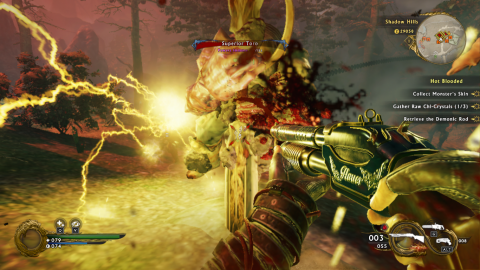 Borderlands with mechanical depth is a pretty cool idea that mostly works, but this does result in inheriting the damage sponge raid bosses from Borderlands, whom do not mesh with the fun and energetic combat. The bonus bounty missions will occasionally test your patience, impossible to complete without some grinding, and a lack of a clear skill tree makes it difficult to judge how hard a mission could potentially be. There’s also the weird inclusion of secrets, still carried over from the other games, but only in the story maps, and it feels superfluous. The game should have probably leaned more into looting here, maybe throw in more strong enemies to try and take down.

Style wise, this is a perfect evolution of everything the reboot tried, mashing together elements of cyberpunk, naturalism, old Japanese ruins, modern Japanese housing design, and weird demon stuff to create something that really pops among its contemporaries. Starting off with The Touch again even ends up fitting better with the game’s more wacky style, complete with an entirely new track by Stan Bush himself. The game leans hard into 80s bigness and goes about it in a fresh way that probably played a big part in the game’s huge success. 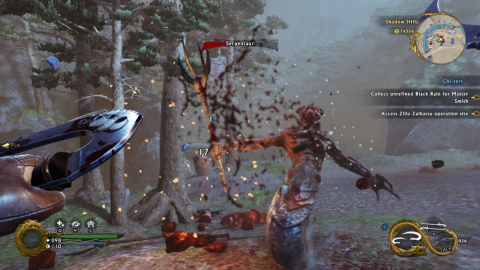 Despite some questionable decisions and a few design choices that don’t fit together well, Shadow Warrior 2 is a blast, with incredible movement and weapon variety to experiment with. It’s a step back in terms of storytelling and writing, but excels in most every other category, mixing looting and classic FPS combat design into a delicious smoothie of dismemberment and one liners. If other looter shooters have been too simplistic for you before, give this one a shot, it has some serious thrills. Just be warned the majority of the story will lose you quick if you haven’t played the Shadow Warrior reboot. It’s hard to say what Shadow Warrior 3 will end up being, hinting at some two player co-op thrills, but whatever it is, Flying Wild Hog has more than proven they’re the right team for the job.