Ranger X, also known as Ex-Ranza in Japan, was published by Sega for the Genesis/Mega Drive in 1993. It was barely marketed and was practically ignored by pretty much everyone. At first glance, it appears to be a platformer with heavy shooting elements – it’s easy to think of the Assault Suits games (Target Earth and Cybernator) – but upon further examination, there’s a whole lot more gameplay underneath. Not to mention some of the most incredible graphics on the Genesis. 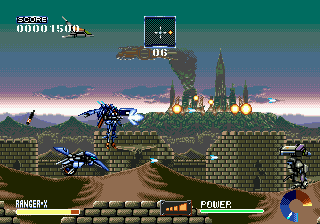 The plot is detailed in the instruction manual and nowhere else. The Homeworld has been invaded by a confederation of Edgezone terrorists – unleashing mechanical and biological plagues. You are Ranger X – a giant mech with unique fighting capabilities. You have the task of clearing out various machines and weapons in each area, then going after the colorful boss enemies. Each level is introduced with some cool vector graphics, showing the landscape and the targets. It’s pretty low-tech, but somewhat impressive considering the platform.

By himself, Ranger X is a formidable fighter. The A button fires left and the C button fires right, which takes a bit of getting used to, but allows for versatility. You can also fly by pressing Up on the directional pad, although you need to keep an eye out on the temperature meter so you don’t overheat and plummet. There are also several special weapons to find throughout the stages, which are activated by the B button – these include a flamethrower, a napalm bomb, a mechanical falcon that acts similar to a boomerang and the almighty proton cannon, which packs an aesthetically pleasing, screen clearing punch. This is already a bit more overwhelming than your average “run and gun” shooter, but it gets even more complicated. You’re also joined by either the Ex-Up Indra or the Ex-Up Eos, a pair of special vehicles that hover alongside your mech. 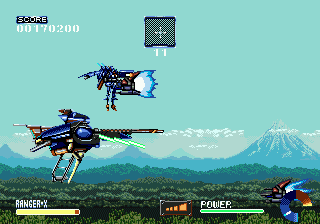 The Indra is basically a motor bike. If you have a six button controller, it can be operated independently with the X and Z buttons. You can also combine with the Indra and take control of the bike directly. It’s very fast, and jump pretty far by holding down on the directional pad. It’s laser gun automatically targets any hostile foes in the area, which makes it easier to clear out enemies in tight spaces. You have to be careful, because the Indra has it’s own life meter, and if it drops to zero, you get destroyed too. The Eos is a small flying spacecraft, and it’s relatively useless. You can’t control it directly, and it only meanders forward, occasionally delivering an odd laser blast. Combining with either of these vehicles is the only way to switch between the special weapons you’ve accumulated.

All of special weapons require power, which is yet another meter on an already cluttered interface. Power can only be restored by being in sunlight or a lit area – meaning while you recharge automatically in certain areas like the outdoor mountain terrain in level 1, but you need to bust open holes in cave ceilings like in level 2, or stand in the spotlights in level 5. Power can also be converted to health transfer machines scattered through the levels, and can also be healed by collecting fruit in a certain stage (which raises a few interesting questions on how that can heal a mech.) 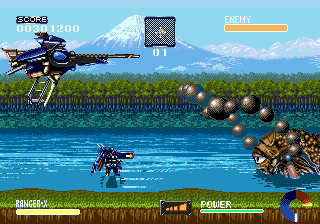 In order to clear a stage, you need to destroy a certain number of a specific enemy type. Most of the time, these range from power stations to powerful robots. The counter at the top of the screen indicates how many are left in the area, and a radar shows you the direction to head in. Almost all of the levels are linear, so it’s pretty hard to miss your targets.

The game play is pretty intense, as enemies as constantly shooting at you, even on the Easy difficulty setting. It takes awhile to get used to the controls, and it doesn’t help that Ranger X is such a huge target. You’re given limited continues, which respawn you right at the point where you died, although you can gain more credits by earning points. 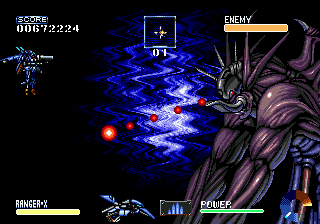 Although Ranger X is notable for intense gameplay, it also ranks up next to Gunstar Heroes as featuring some of the most impressive graphics on the Genesis. Working with the limited 64 color palette of the system, Ranger X produces some extremely colorful visuals, Certain areas have some cool parallax scrolling effects, which gives them a nice 3D look, There are also plenty of unique bosses, most of whom take up very large portions of the screen. One of the bosses, a brain with an eye on its forehead, seems to be a homage to Life Force, and one of the later machines seems to ripped straight out of Gradius, complete with a red core in the middle.

The music is percussion heavy and a bit repetitive, but fitting of the game’s mood. Most of the time, it’s muffled underneath all of the explosions. The music near the end of the game is some of my favorite 16 bit tunes. 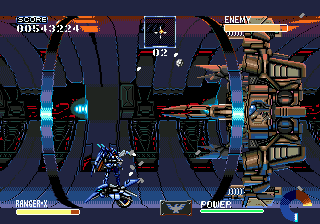 Ranger X is definitely a game worth checking out, though it’s not without flaws. The hardest difficulty setting makes level four’s tower climb nigh impossible by removing cooling platforms for your jet-pack (it can be done, but it takes a lot of patience). The game will challenge you and even force you to slow down to clear threats or collect points, which can be somewhat tedious. Also, don’t bother with the Easy setting, because you’ll only get one of those crappy non-endings that tells you to play on a higher difficulty level.

Although Sega published this overlooked classic, Ranger X was created by a company called Gau Entertainment. Unfortunately, it was the first and last game they ever made. Gau Entertainment ended up merging with former members of Wolf Team (known best for the likes of El Viento and Valis) to create the company NexTech. On the Genesis, it developed Crusader of Centy, and for the Saturn, they created Cyber Speedway. It also appears to have been aided other companies in the development of Resident Evil: Code Veronica, Shining Soul, and unfortunately, the rather lame Shining Tears.

Thanks to Mobygames and Motoi Sakuraba the Wolfteam/Telenet Legacy for the additional info on Gau Entertainment and NexTech.

Links:
Sega-16 – Ranger X Another review of this excellent game.